Story of rescued miners in ‘The 33’ should be compelling, but isn’t 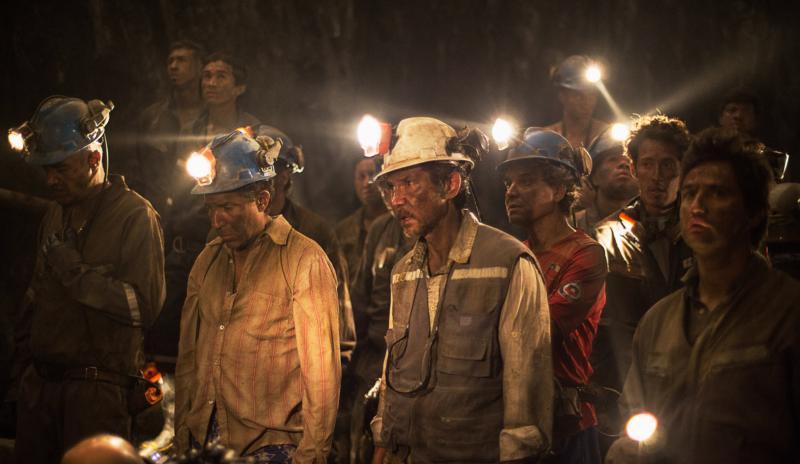 Oscar Nunez and Lou Diamond Phillips star in a scene from the movie "The 33." (CNS photo/Warner Bros.)

NEW YORK (CNS) — The real-life story behind the drama “The 33” (Warner Bros.) would seem to provide all the necessary ingredients for a compelling film.

The events on which the picture is based, after all, were sufficiently engaging to grip the attention of the global media and to hold millions around the world in suspense for a time.

As many will remember, in 2010, a catastrophic cave-in at a copper and gold mine in Copiapo, Chile, trapped the titular number of miners underground for an initially terrifying, and subsequently grueling, 69 days. Their Oct. 13 rescue, a triumph of ingenuity achieved against intimidating odds, was witnessed live — and with fascination — from Times Square to Tierra del Fuego.

How to explain, then, the disappointing fact that this riveting piece of recent history becomes, under the direction of Patricia Riggen, a mostly admirable but less than absorbing example of Hollywood fictionalization? The key factor seems to be the decision to focus on too wide an array of the people caught up in the actual saga, a choice that leaves the film overcrowded and underdeveloped.

For starters, we’re sketchily introduced to too broad a cross-section of the miners themselves. Along with Mario Sepulveda (Antonio Banderas), the man who emerges as the captives’ unofficial leader, and Luis “Don Lucho” Urzua (Lou Diamond Phillips), their duped representative with management, we meet the ensemble’s self-appointed — but not unsound — spiritual guide, Jose Henriquez (Marco Trevino), aka “The Pastor.”

This teeming population hinders the kind of detailed characterizations that would lead audiences to identify more deeply with the plight of the imperiled, the anxieties of their loved ones and the varied hopes and fears of their would-be liberators. Honorable themes highlighting corporate irresponsibility and the reconciling power of a life-threatening crisis also get lost in the shuffle.

Catholic viewers will appreciate the prayerful Christian faith that permeates the diggers’ lives, both before and during their ordeal. Yet this disposition to believe — expressed in everything from the reverence shown to a statue of the Virgin Mary that’s strategically placed at the mine entrance to the successful conflict resolution skills displayed by The Pastor — fails to prevent at least one glaring violation of scriptural morality.

Married miner Yonni Barrios (Oscar Nunez), we learn early on, is casually pursuing an affair with his next-door neighbor. As this previously private lapse becomes fodder for Chile’s tabloids, and Yonni’s wife and mistress descend to cat-fighting, screenwriter Mikko Alanne ill-advisedly portrays the familial mayhem as a source of comic relief.

Like the script’s more serious attempts to draw ore from a potentially rich vein, this swing of the cinematic pickaxe goes sadly awry.

The film contains a frivolous treatment of adultery, some mildly gory injuries, brief sexual talk, at least one use of profanity and a handful of crude and crass terms. The Catholic News Service classification is A-III — adults. The Motion Picture Association of America rating is PG-13 — parents strongly cautioned. Some material may be inappropriate for children under 13.

NEXT: In ‘Brooklyn,’ a woman’s tale of immigration, sans the melodrama