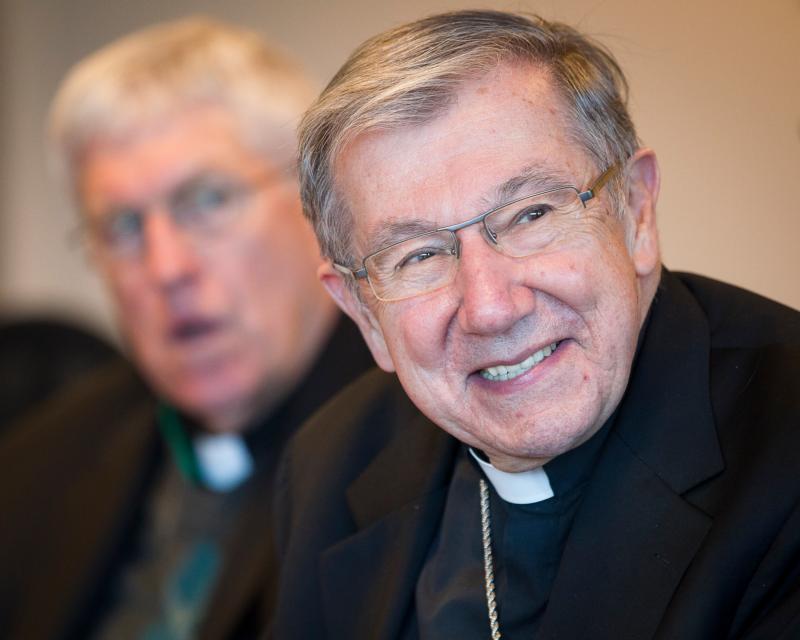 BALTIMORE (CNS) — A new 120-page document marks the progress in Catholic-Lutheran relations over the past 50 years and maps the remaining steps needed to achieve full unity.

The “Declaration on the Way” was prepared by a joint task force of the U.S. Conference of Catholic Bishops’ Committee on Ecumenical and Interreligious Affairs and the Chicago-based Evangelical Lutheran Church in America, which has more than 3.7 million members in 9,300 congregations across the United States.

The document was inspired by a December 2011 speech by Cardinal Kurt Koch, president of the Pontifical Council for Promoting Christian Unity, and draws on the work of national and international Catholic-Lutheran dialogues since 1965, particularly on the topics of church, ministry and the Eucharist. It was intended to mark the 50th anniversary of Catholic-Lutheran dialogue in 2015 and the upcoming 500th anniversary of the start of the Protestant Reformation in 2017.

“It’s amazing to think that 500 years ago we were killing each other over” issues on which there is now consensus between the two communions, said ELCA Presiding Bishop Elizabeth A. Eaton in a Nov. 4 telephone news conference about the declaration.

“We grew up in a time when our communities were absolutely divided; now instead we are rejoicing in the places we find agreement,” she added.

Auxiliary Bishop Denis J. Madden of Baltimore, the Catholic co-chairman of the task force, said Pope Francis on his recent U.S. visit and throughout his papacy has emphasized “a culture of dialogue” that is reflected in concrete form in the new declaration.

The document’s introduction says the two churches have come a long way since “the disunity, suspicions and even hostilities that characterized our relationships for generations,” but says the time has come “to claim the unity achieved through these agreements, to establish church practices that reflect this growth into communion and to commit ourselves anew to taking the next steps forward.”

It concludes by asking the Lutheran World Federation, a global communion of 145 churches in 98 countries, and the Pontifical Council on Promoting Christian Unity to jointly “receive, affirm and create a process to implement” the 32 statements of agreement outlined in the declaration and to establish “a process and a timetable for addressing remaining issues on church, Eucharist and ministry.”

“The expansion of opportunities for Catholics and Lutherans to receive holy Communion together would be a significant sign of the path toward unity already traveled and a pledge to continue together on the journey toward full communion,” the task force added.

In addition, the task force urged action and study at the local level between Lutheran congregations and Catholic parishes, as well as formal and informal cooperation among bishops of both denominations at the regional level.

The declaration is not a statement of the full body of Catholic bishops, but was affirmed in October by the ELCA Conference of Bishops, an advisory body, which asked the ELCA Church Council to forward the document to the 2016 ELCA Churchwide Assembly, its highest legislative body.

Bishop Madden said the Catholic bishops are not scheduled to vote on the declaration during their Nov. 16-19 annual fall assembly in Baltimore but that he hoped it would be the topic of much discussion among the bishops.

“We want all the bishops to know about this declaration and help promulgate it in their own dioceses,” he added.

Jesuit Father Jared Wicks, a Catholic member of the task force and scholar in residence at the Pontifical College Josephinum in Columbus, Ohio, said in an ELCA news release that the document represented “a moment to move from study to declaration, to expand in Catholic and Lutheran believers a shared awareness of their real agreements on significant and well-defined essentials of our faith and life.”

Asked at the news conference what was the most difficult issue that continued to divide Lutherans and Catholics, Bishop Madden cited women’s ordination as “one of those issues that we are still discussing.”

The Lutherans have been ordaining women since 1970; the Catholic Church teaches it has no authority “to confer priestly ordination on women.”

Bishop Eaton said Lutherans still had difficulty with the Catholic understanding of “the role of the bishop of Rome” and the issue of papal infallibility.

“We are really sorry for some of the things (Martin) Luther said about (the pope) back in the day,” she said, adding that there have been “terrible misunderstandings and, on our part, unfortunate caricatures” surrounding the issue.

“But we really like this one (Pope Francis) a lot,” Bishop Eaton said.

Kathryn Johnson, ELCA director for ecumenical and interreligious relations, said the declaration marked the beginning of “a totally different world of relationship and hopefulness” between Catholics and Lutherans.

Father John Crossin, executive director of the USCCB Secretariat for Ecumenical and Interreligious Affairs, said he had been approached by an Anglican colleague about doing a similar document that looks at remaining issues dividing the two communions.

The declaration “is already starting to have a little ripple effect,” he said.

An online version of “Declaration on the Way” and any recent developments can be found at this USCCB here; and at this ECLA here.