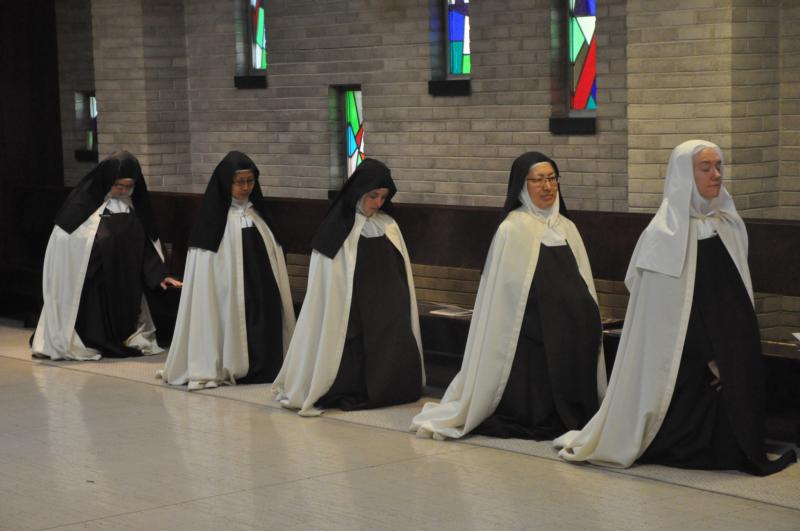 Discalced Carmelite Sisters Mary Grace Melchior, Marianna So, Marie Cecile Franer, Susanna Choi and Christine Rosencrans kneel in prayer at the Carmelite Monastery of St. Joseph in Terre Haute, Ind., during an Oct. 10 Mass to celebrate the 500th anniversary of the birth of St. Teresa of Avila, foundress of their order. (CNS photo/Sean Gallagher, The Criterion)

But on a recent Saturday, a group of Discalced Carmelite nuns in Terre Haute celebrated the close connection that they have to St. Teresa of Avila, their order’s foundress, who was born in Spain 500 years ago.

Indianapolis Archbishop Joseph W. Tobin, several priests and scores of friends of the Carmelite Monastery of St. Joseph worshipped Oct. 10 with the 14 contemplative nuns of the Terre Haute community during a Mass in honor of St. Teresa.

In his homily, Archbishop Tobin shared the connection that the nuns had with their foundress.

He said that they, and all people of faith today, can learn what holiness means by looking to St. Teresa.

“(She) taught that holiness begins with desire,” Archbishop Tobin said. “Holiness understood as communion with God who is love, and living in a loving relationship with the people that God sends into my life begins with wanting it.”

He also reflected on the way in which St. Teresa understood that God was working through the many instances of suffering in her life to bring about great good.

“For her, suffering was not simply a masochistic embrace of pain,” Archbishop Tobin said. “It was confidence that God was doing something with the suffering that came into her life. She often talked about being purified by what she suffered. Certainly, God made her suffering fertile.”

Ultimately, Archbishop Tobin said, St. Teresa remains relevant for the Catholic Church today because of the way she points to Jesus, and helps the faithful of all times and places grow in their relationship with him.

“Jesus is the only way that we can understand the gift that God’s love brings to us,” he said. “And it is only by our enduring friendship with him that we will make our way home.”

Archbishop Tobin said with a smile that he reflected on the saint in his homily “in great fear and trembling knowing that the real experts on St. Teresa of Avila are sitting behind me.”

The monastery’s chapel is arranged with the altar in the middle, with the cloistered nuns separated from the sanctuary and the congregation by cast-iron grillwork.

After the Mass, members of the Discalced Carmelite contemplative community — which supports itself through making icons, greeting cards and knitted gift items, in addition to the support of donors — spoke about the importance of St. Teresa to their vocation and community life.

Mother Anne Brackman, the monastery’s prioress, has had much opportunity to reflect upon the example and teachings of St. Teresa since entering the community in Terre Haute in 1959, just 12 years after it was founded.

She noted the continuing significance of the conversion that occurred in Teresa’s life, where she went from wanting people to admire her, to her living for Christ alone.

“I believe that people today need to be encouraged that conversion is possible,” Mother Anne said. “Sometimes, it takes a long time.”

She said that St. Teresa’s example can be an encouragement to Catholic parents “who are very distressed at the faith life of their children” who no longer practice it.

She was gratified to have the archbishop, several priests and so many friends of the cloistered monastic community gather to honor their foundress.

“It certainly was an affirmation of what we hope we are for the archdiocese,” Mother Anne said. “Even though we are primarily hidden and many people may not know about us, we believe that our life of prayer can be leaven in the dough.”

Sister Clare Joseph Daniels reflected after the Mass on how the community has given special attention to the study of St. Teresa’s writings in the three years leading up to the 500th anniversary of her birth.

“It’s been like having her so present to us. We owe everything to her,” Sister Clare Joseph said. “She gave us the way to walk more closely with Christ.”

For Sister Clare Joseph, St. Teresa is timeless because she “was so rooted in the Gospel.”

“She was so rooted in following Christ,” Sister Clare Joseph said. “For me, Teresa totally shows the way of radical love, radical commitment and radical abandonment to following Christ.”