Back to the catacombs: New emphasis placed on bishops’ simplicity pact 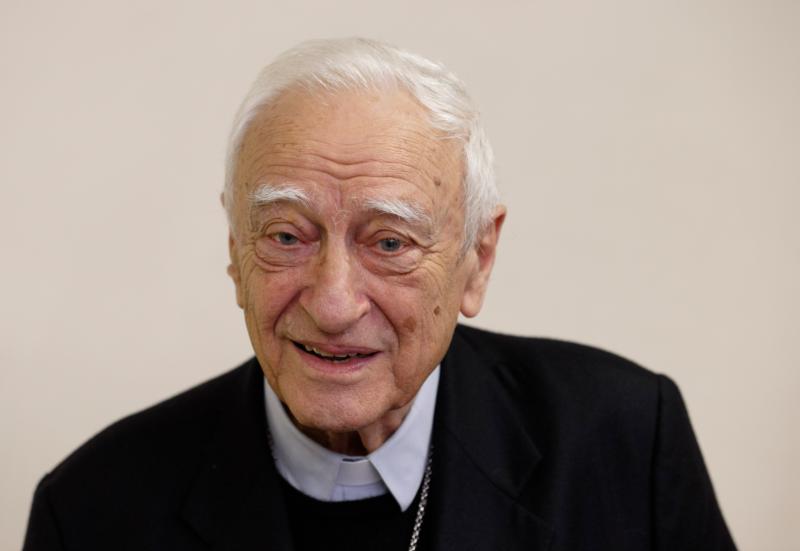 Retired Italian Bishop Luigi Bettazzi of Ivrea, Italy, is pictured during a press conference at Vatican Radio Nov. 12. Bishop Bettazzi, 92, is the last surviving bishop of the 42 members of the Second Vatican Council who signed a pact in 1965 in the Catacombs of Domatilla promising to live simply and close to the poor. (CNS photo/Paul Haring)

To live is to change, said the retired bishop of Ivrea, and that goes for the church as well as for individuals.

“Too often we think upholding tradition is standing firmly on what we have done in the past, when tradition really is to keep moving,” the bishop told reporters Nov. 12 at a Vatican news conference.

The Second Vatican Council, he said, challenged bishops to change with the aim of living a modern evangelical lifestyle.

Bishop Bettazzi is the last surviving bishop of the 42 members of the Second Vatican Council who celebrated a Mass Nov. 16, 1965, in the Catacombs of Domitilla and signed a pact promising to live simply and close to the poor.

The international unions of superior generals of men’s and women’s religious orders and the Society of the Divine Word, which staffs the catacombs, were to celebrate the 50th anniversary of the “The Pact of the Catacombs” Nov. 14 at Rome’s Pontifical Urbanian University.

The bishops who signed the pact in the catacombs shared it with other members of the Second Vatican Council and soon collected 500 signatures, which they entrusted to Blessed Paul VI. Bishop Bettazzi said the commitments were personal and individual, not the start of some organized movement.

In “housing, food and means of transportation,” the signatories promised to try “to live in accordance with the ordinary manner of our people.” The pact also said, “We renounce forever wealth and the appearance thereof,” especially in clothing and insignia.

Bishop Bettazzi said that he “was not as strong as Pope Francis” when it came to housing; when told by the vicar general of Ivrea that he had to live in the bishops’ residence, he did. The bishop also said he has kept the gold ring Pope Paul gave bishops at the end of the council, but he does not wear it because it is “ostentatious.”

Signing the pact, the bishops vowed not to have personal bank accounts and to find qualified laypeople to handle their dioceses’ temporal affairs so they and their priests could devote themselves to ministry. They pledged to enhance charitable activities with advocacy for justice.

“There was no coordination” or follow-up, Bishop Bettazzi said, “and slowly over time, it was a bit forgotten.”

The bishop blames part of the pact’s low profile on what he describes as a reaction of fear and closure following the 1968 social upheaval in Europe.

“1968 frightened everyone and everything closed down,” he said. “You could say they threw the baby out with the bathwater.”

The approach of the 50th anniversary of the pact led to new research and interest, he said, “and God with his grace gave us a pope like Francis, who without having signed the pact, already led this kind of life and had experience of a simple church, a poor church, a church very close to the poor.”

“The remembrance of the pact has been revived thanks to the atmosphere Pope Francis has indicated for the whole church to follow,” the bishop said.

The only North American among the pact’s original 42 signers was Canadian Bishop Gerard-Marie Coderre of Saint-Jean-de-Quebec; he died in 1993.

Bishop Erwin Krautler, prelate of Xingu, Brazil, had been a priest only four months when the pact was signed in Rome, but he said he has strived to live its commitments over the course of the 35 years he has been a bishop in Brazil’s Amazon basin.

The 76-year-old Austrian-born bishop said that when he was appointed to Xingu in 1980, he met with the people of the diocese to ask what they wanted and needed from a bishop. They asked him not to “run the diocese from your desk, but to come to where we live” and to share their lives, he said. Following the pact was key to responding to that request, he said.

Mercedarian Missionary Sister Filo Hirota, speaking on behalf of the religious superiors, said the pact describes a commitment to discipleship that impacts the bishops’ “daily life, their lifestyle, the way of being church and (being) with the people of God in a very concrete way.”

“The pact challenges us religious,” who have made solemn vows to follow Christ who is poor, obedient and chaste, she said.

NEXT: Tear down this wall: Holy Year calls for human barriers to tumble down