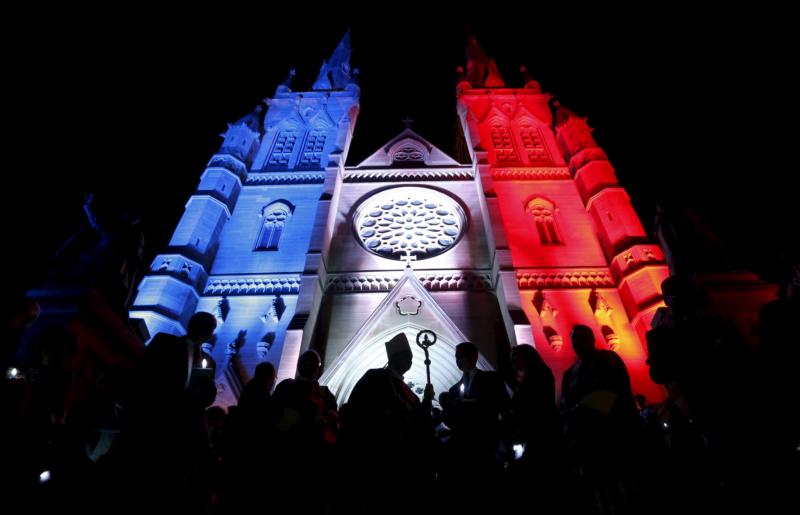 “The time has come for the world to stand united against terrorism and to confront the reasons of terrorism, such as feelings of oppression, hatred, bad education and fanaticism, with no double standards,” said the Jerusalem-based Assembly of Catholic Bishops of the Holy Land.

They called for a unification of “forces of good” and “countries and followers of all religions against violence, which hits the world with increased brutality.” Otherwise, they said, it will hit everyone “sooner or later.”

“We express our full solidarity with the French and Lebanese peoples and with the victims of terrorism and their families in Paris and Beirut and worldwide,” they said.

“We pray to the almighty for healing the wounded and consoling those who are grieving,” they added. “We pray also for terror preachers and promoters so they backtrack and regret what they do.”

In Beirut, the Assembly of Catholic Patriarchs and Bishops in Lebanon concluded its meeting Nov. 14, a day after multiple terror attacks in Paris left at least 129 people dead and wounded hundreds more and two days after a twin suicide bombing in Beirut’s southern suburbs killed at least 46 people and wounded more than 200. Islamic State claimed responsibility in both cases.

The Lebanese assembly “strongly condemns the criminal act and urges the Lebanese to join efforts to combat terrorism.”

The patriarchs and bishops also condemned “in the strongest terms” the terrorist attacks in Paris, offering their condolences and prayers to “comfort the souls of the dead and heal the wounded and bring peace.”

The council denounced the violence to which Christians and other minorities in Syria and Iraq are subject and urged the international community and major powers to end war and achieve a “peaceful settlement” of the conflict.

Alluding to a proposed scheme to partition up Syria — which the Eastern churches reject — the prelates stressed that a peaceful settlement must also respect international laws “that ensure the rights of peoples and states and ensures their territorial integrity.”

“The worsening crisis and wars in several countries of the Middle East,” the patriarchs and bishops said, “has become an international responsibility beyond the countries of the region and its peoples.”

Meanwhile, grief at the terror atrocities in Paris was being expressed on a global scale, with church leaders from Scotland to South Korea sending messages of condolences to Cardinal Andre Vingt-Trois of Paris. France declared three days of national mourning in France.

In London, Cardinal Vincent Nichols of Westminster, president of the Bishops’ Conference of England and Wales, also defended innocent Muslims against any notion that they might be to blame for the slaughter.

In a statement issued Nov. 14, Cardinal Nichols said he prayed that Muslim communities in both France and England “may not be victimized because of the actions of these violent and ruthless extremists but strive always for the way of peace and cooperation with the wider society.”

In Brussels, Father Patrick Daly, general secretary of COMECE, the Commission of the Bishops’ Conferences of the European Community, issued a Nov. 14 statement urging the countries of the bloc to respond to the crisis together.

“It is vital that Europe presents a united front to the terrorist threat, that it be united, too, in its foreign and defense policy,” he said.

“The forces which currently threaten Europe do not respect national borders,” he continued. “It is imperative that the 28 member states of the EU act together more effectively. Our collective security is at issue, as is our freedom to live together in peace.”

Islamic State has said that the Paris attacks were in revenge for French airstrikes on jihadist targets in Syria.

On Nov. 16, it released a video threatening to attack every country taking part in military action against Islamic State fighters in Syria and Iraq, saying it would specifically target Washington because of the intervention of the United States.

But just hours after the Paris attacks, the group also released a video in which masked gunmen said an attack was imminent in the Philippines, which, beginning Nov. 18, was to host the Asia-Pacific Economic Cooperation summit of many world leaders, including U.S. President Barack Obama.

“The dark days are coming to you,” said the video message addressed to the Philippines government. “We will terrorize you even in your sleep. We will kill you and defeat you.”

Ucanews.com reported that Muslim rebel groups in the Philippines distanced themselves from the Paris attacks, with the Moro Islamic Liberation Front issuing a statement that said “blind, indiscriminate acts of violence deserve nothing but condemnation.”

The group said it rejected “acts of terror against humanity and all peace-loving peoples,” ucanews.com reported.

Philippine church leaders responded to the attacks by encouraging Catholics to pray for the terrorists — as well as for the victims — so that “a new sense of humanity will possess their souls again.”

“There is no place for terrorism in a civilized society,” Archbishop Socrates Villegas, president of the Philippine bishops’ conference, said Nov. 15. “Causing the death of anyone is a sin against God and a crime against humanity.”

Cardinal Luis Antonio Tagle of Manila also urged citizens to “unite ourselves with the many people who are suffering and the victims of violence.”

“We cannot isolate ourselves from what is happening in different parts of the world,” he said, adding that the Catholic Church joins the whole world in “sadness and in shock.”

The directors of the center called upon “all peace-loving people to set aside fear, to stand together and to condemn violence in the name of any religion.”

Contributing to this story were Simon Caldwell in Manchester, England; Judith Sudilovsky in Jerusalem; and Doreen Abi Raad in Beirut.

PREVIOUS: Canadian theologian visiting Paris was minutes away from the bloodshed