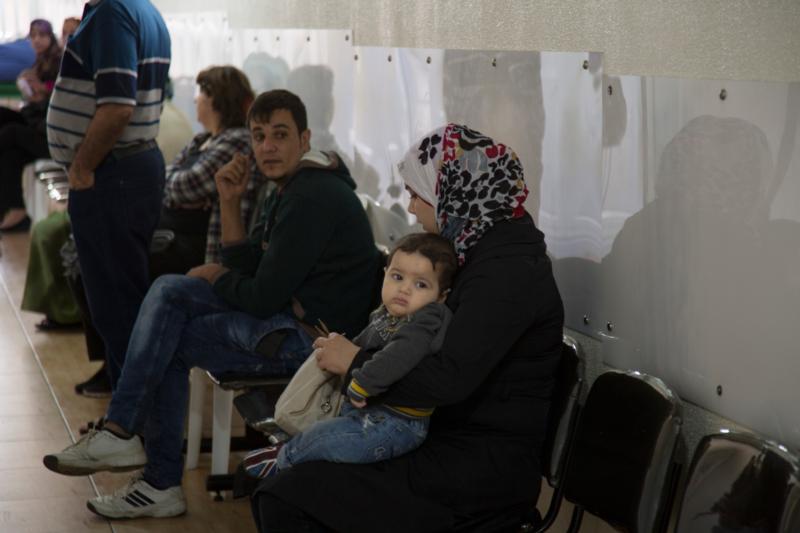 Patients wait for their turn to be treated at St. Anthonys medical dispensary in Beirut. The clinic, run by the Good Shepherd Sisters, functions as a primary health care center, serving Iraqi and Syrian refugees, as well as Lebanon's poor. (CNS photo/Dalia Khamissy) .

BEIRUT (CNS) — The three Iraqi retirees met up at St. Anthony’s medical dispensary to get medication for hypertension, an ailment exacerbated by the stress of life as a refugee.

As they waited their turn, they recalled their life in Qaraqosh, Iraq.

“We celebrated everything together,” 70-year-old Wissam told Catholic News Service. “We had the biggest celebrations in all of Iraq, especially in summer.”

That was before the Islamic State seized control of Qaraqosh in August 2014, driving out some 50,000 Christians. Many settled in Lebanon, hoping to emigrate to Europe, the Americas or Australia for a brighter future.

Wissam, Kassem and Youssef — identified by pseudonyms — were a school principal, a physics teacher and a self-employed businessman who simultaneously operated five enterprises.

In Beirut, they were seeking help as the poorest of the poor at a clinic run by the Good Shepherd Sisters. The refugees’ adult children include a doctor and a pharmacist who, in Lebanon, had to settle for jobs in supermarkets.

In the crowded waiting area Nov. 18, the three friends shook their heads in disbelief as they shared images on their phones received via social media of seven people from two families — fellow Syriac Catholics from Qaraqosh — who drowned the previous day in the Aegean Sea en route from Turkey to Greece.

“We cried all day,” Youssef said of his reaction when he heard about the deaths. “It is such a tragedy.”

“If we try to get to another country, it could be the same. Maybe we will arrive, or maybe we will perish too,” he added.

St. Anthony’s functions as a primary health care center, serving Iraqi and Syrian refugees, as well as Lebanon’s poor. It is accredited by Lebanon’s ministry of health, and its motto is displayed at the entrance: “Religion is for God and the dispensary is for everyone.” The Good Shepherd Sisters’ ministry of mercy and of seeing the face of God in each person they encounter permeates the atmosphere in the clinic, which is supported by international agencies such as the Catholic Near East Welfare Association and Aid to the Church in Need.

On average, 200 refugees are helped at the clinic each day. Last year, the center served 17,000 people. Recently, as part of a vaccination campaign, more than 2,000 children were vaccinated at the center in less than a week.

“These are people who are needy and who are seeking medical support,” Dr. Hadi Jaklh, a physician who supervises a rotating team of 40 doctors at the center, told Catholic News Service. “Unfortunately, what we see in the media does not reflect 100 percent the reality of things. We don’t see (them as) terrorists.”

“We provide them with the best service we can possibly give,” Jaklh said, adding that “we don’t get into religion or politics” with the patients.

“I really don’t have words to describe what they are living,” said Good Shepherd Sister Georgette Tannoury. “They are very traumatized. I cannot even repeat what they tell me.”

“For me as a religious, I try to live the mercy of God, I try be compassionate with them, to help them, but it is very, very limited,” said Sister Tannoury. “I try to help, but it is nothing compared to what they are living as people. They are living an injustice.”

At the clinic, a visit with a general physician, pediatrician or gynecologist costs just under $4. To meet with a specialist such as a cardiologist, the fee is $8. For a month’s supply of medication for a chronic condition, the patients pay 75 cents.

The impeccably clean facility is constructed from four corrugated shipping containers joined together. Illustrated posters in Arabic decorate the walls, outlining nutritional guidelines; instructions for breast self-examinations; and procedures to prevent and treat outbreaks of lice and scabies.

In the seating area that faces the consultation rooms, a woman quietly retrieved her toddler son as he scurried ahead of her. As they waited, some of the visitors chatted with one another.

“It’s a bit difficult to see this big load of patients who had everything in their country and suddenly they had to leave everything and come here,” Jalkh said. Most of the Iraqis lived comfortably but came to Lebanon with nothing and cannot even afford a blood test, he added.

“It’s very painful for them and for the staff working here. We are dealing everyday with people not only with medical issues, but psychological issues and psychological difficulties,” the doctor said.

“We hope that the crisis will soon end so that they can either go back to their country or have the opportunity to go elsewhere and live in dignity,” Jalkh said.

Lebanon, about two-thirds the size of Connecticut with an existing population of around 4 million, is housing 1.5 million refugees.

NEXT: Journalists claim freedom of press at ‘VatiLeaks’ trial