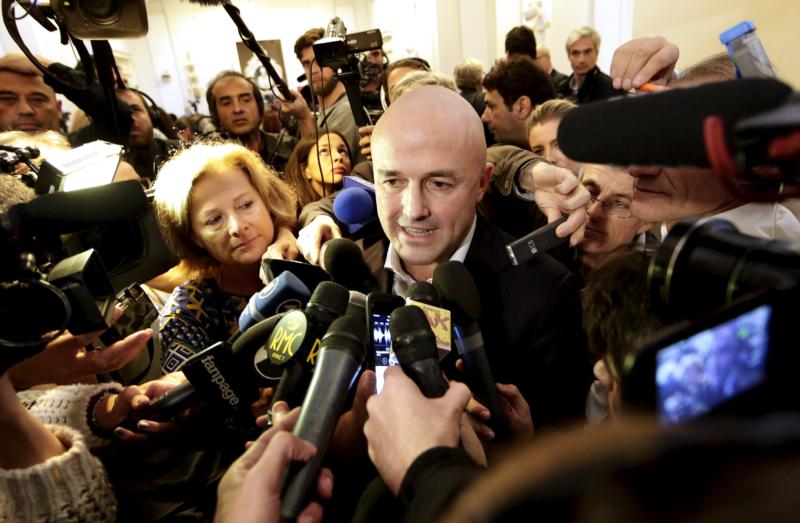 Italian journalist Gianluigi Nuzzi is surrounded by the media after a Nov. 4 news conference for his new book "Merchants in the Temple: Inside Pope Francis' Secret Battle Against Corruption in the Vatican." (CNS photo/Yara Nardi, Reuters)

VATICAN CITY (CNS) — Leaked and published information about Vatican financial problems and irregularities were already known and are the reason “measures have already been taken that have begun to bear fruit,” Pope Francis said.

At his first public appearance since the release Nov. 5 of two books based on the leaked documents, Pope Francis assured Catholics that the leaks “certainly will not divert me from the reform work that I and my collaborators are carrying out with the support of all of you.”

After reciting the Angelus prayer Nov. 8 with visitors in St. Peter’s Square, the pope told the crowds he knew that some people were “disturbed by the news circulated in recent days about private documents of the Holy See that were taken and published.”

“Stealing documents is a crime,” the pope said. “It is a deplorable act that does not help.”

Gianluigi Nuzzi’s book, “Merchants in the Temple,” and Emiliano Fittipaldi’s book, “Avarizia” (“Greed”), cite documents written for or by a commission Pope Francis established to study the financial activity of Vatican offices and make recommendations for reforms and improvements. Both books focus on the irregularities uncovered.

The Vatican announced Nov. 2 the arrests of two members of the former Pontifical Commission for Reference on the Organization of the Economic-Administrative Structure of the Holy See. The monsignor and the laywoman are suspected of releasing confidential documents, which is a crime under Vatican law.

In his main Angelus address, Pope Francis focused on the day’s Gospel reading, the story of the widow who gave all she had — two small coins — to charity.

In the Gospel, Jesus tells the crowd to beware of the scribes who take the places of honor, recite lengthy prayers and yet mistreat the widows.

The scribes, the pope said, show signs of pride, greed and hypocrisy. “Under such solemn appearances, they hide falsity and injustice.”

“Today, too, the risk of assuming such attitudes exists,” the pope told the crowd. “For example, when one separates prayer from justice, because you cannot worship God and harm the poor.”

The poor widow in the Gospel could have given one coin to the temple and kept one for herself, the pope said. “But she did not want to give only half to God,” whom she loved with her whole heart.

“Jesus today tells us that the measure for judging is not quantity, but fullness,” the pope said. “You can have a lot of money, but be empty.”

“The difference between quantity and fullness is not a question of your wallet, but of your heart,” he said.

When Christians see someone in need, he said, they are called to deprive themselves in order to help, whether in terms of money, material goods or time and attention.

NEXT: Pope: Dignity of workers must never be compromised