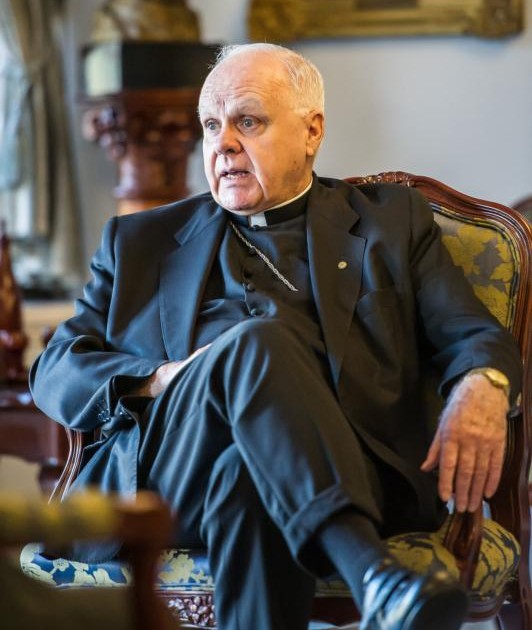 Cardinal Edwin F. O’Brien, grand master of the Knights of the Holy Sepulchre, speaks during an interview in Sydney, Australia, Oct. 15. The U.S. cardinal said forces in the Mideast are intent on eradicating Christians. (CNS photo/Giovanni Portelli, The Catholic Weekly)

SYDNEY (CNS) — When Cardinal Edwin F. O’Brien was named grandmaster of the Knights of the Holy Sepulchre in 2011, he found himself embroiled in a war a world away from the jungles of Vietnam where he ministered to dying troops as a young priest.

“The forces that are at work now are intent on eradicating the Christian civilization, nothing less,” said the 76-year-old U.S. cardinal, who was in Sydney in October to reach out to the order’s 600 Australian members.

Christians in the Holy Land face “daily horrors,” while “our public is very blase about the whole thing,” Cardinal O’Brien said.

“Unless we face the facts, this radicalism, this extremism, is going to keep spreading,” he told The Catholic Weekly, newspaper of the Archdiocese of Sydney.

Islamic State militants attacked Assyrian Christians, one of the world’s oldest Christian communities, in northeastern Syria in February. Reports on the assault note that the militants emptied about 30 villages, kidnapped up to 300 people, destroyed churches, and forced about 1,000 local Assyrian families to flee their homes.

Most disturbing for Cardinal O’Brien is the lack of military response from the United States.

“We’ve had an opportunity to stop those forces” and “we did nothing to stop them,” said the cardinal who has spent much of his life working alongside the U.S. military. “Now those Christian villages have been eradicated, (people) killed, taken into slavery.”

Born and raised in New York, he was ordained a priest in 1965 as the United States Military Academy at West Point was preparing to double in size. The young priest was appointed to the academy, initially as a civilian priest on a temporary posting.

That posting stretched to five years and he was so impressed by the tenacity shown by a generation of young men that he could no longer remain on the sidelines, Cardinal O’Brien said.

“I’d be marrying cadets in June and a year later burying them, because they had been shipped right to Vietnam,” he said. “I had great admiration for what I saw and what I heard: the generosity, the integrity, the selflessness of the cadets and of the staff.”

He said he joined the U.S. Army with the rank of captain with one goal in mind: to go to Vietnam. His mission, as he saw it, was “to keep our men and women in the military strong in their faith, and to give them guidance and counsel when they needed it personally or professionally.”

Serving alongside troops in combat was the first step toward gaining their trust, the cardinal said.

His Vietnam experience strengthened his faith, he said, noting that he considers military service to be a lofty vocation.

“Christ said, ‘I have come to serve and not be served’. When one puts on a uniform that person enters the service,” he said.

Decades later, another war defined another chapter of his religious life.

In September 2001, Cardinal O’Brien was four years into his tenure as coadjutor of the Archdiocese for the Military Services, overseeing the nation’s 1.5 million Catholics in the military, when the country was struck by terrorists.

On Sept. 11, he was at his desk in Washington, where the military archdiocese had been hosting a retreat for 40 priests who were chaplains to local military units.

“I heard of the first plane, then I rushed over to where the chaplains were, and everything was on lockdown,” he said. “It was a traumatic moment, and everyone looked to the military to do something and to the president to take action, and the president was more than willing to do it.”

Cardinal O’Brien drew public and media scrutiny when he appeared to endorse U.S. military intervention in Iraq in the context of just-war theory.

In 2003, he told a congregation of service members at a Mass at West Point that they were “bound in conscience to obey the orders of your commander-in-chief, and if he orders you to go to war, it is your duty to go to war.”

Cardinal O’Brien left the military archdiocese in 2007 when he was appointed archbishop of Baltimore.

He said his appointment as grandmaster of the Knights came as a shock after less than four years in Baltimore.

“I got there (Baltimore) within seven years of retirement, and I just presumed that was the last stop,” he said. “When I got the call, I didn’t want to leave, but when the Holy Father asks you to do something, you do it.”

The cardinal said he now enjoys “the challenge of serving some very generous men and women — 30,000 knights and ladies of the Holy Sepulchre — who are intensely interested in bringing justice and relief to a downtrodden minority in the Holy Land.”

To serve them “is to serve some of the poorest in the world, and some of the most persecuted Christians,” he said.

McCowen is on the staff of The Catholic Weekly in Sydney.

NEXT: Vatican nativity scene, tree to be unveiled early for Year of Mercy