Vatican nativity scene, tree to be unveiled early for Year of Mercy 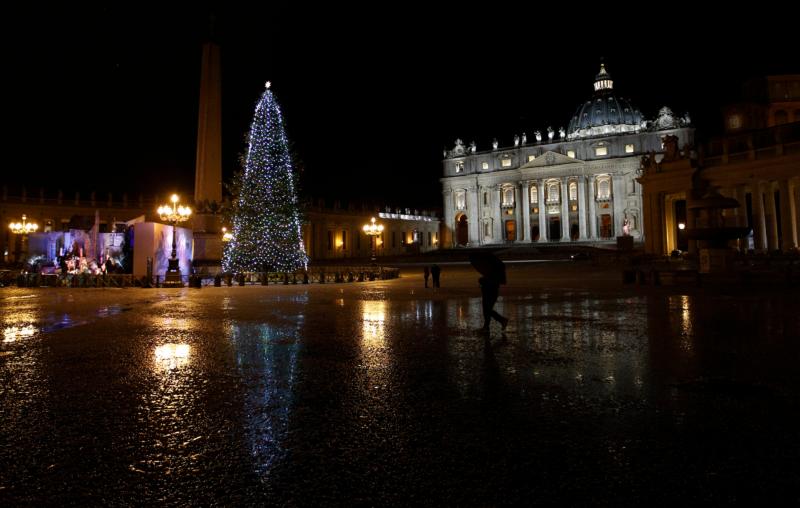 The St. Peter's Square Christmas tree is reflected in a puddle of slush after a five-minute hail storm hit the Vatican Feb. 1. (CNS photo/Paul Haring)

VATICAN CITY (CNS) — The Christmas tree and Nativity scene in St. Peter’s Square will be set up and unveiled earlier than usual this year to be ready for the opening of the Year of Mercy.

In preparation for the extraordinary event, which begins Dec. 8 with the opening of the Holy Door in St. Peter’s Basilica, Vatican workmen broke through the masonry that had walled off the door.

Cardinal Angelo Comastri, archpriest of the basilica, led a small ceremony that included prayers and a procession Nov. 17, the eve of the anniversary of the basilica’s dedication in 1626.

Four Vatican workmen then used a pickax to break through a portion of the wall that covers the Holy Door from inside the basilica. They removed a sealed metal box that, in keeping with tradition, had been embedded in the wall at the end of the Jubilee Year of 2000.

The zinc box, which was opened with a blowtorch, contained the keys and handles for opening the holy door, commemorative medals and a papal gold coin marking the last Holy Year.

The Vatican also announced Nov. 18 that the traditional tree and Nativity scene that dominate the center of St. Peter’s Square would be ready by Dec. 8, the feast of the Immaculate Conception.

The 82-foot spruce fir comes from Germany’s Bavaria region. The decorations this year were to include painted ceramic ornaments made by children receiving oncological care in a number of Italian hospitals.

The Nativity scene was donated by the northern Italian province of Trent. The 24 life-sized figures carved from wood included Mary, Joseph, the baby Jesus, the Three Magi and a man bending over to help an elderly man in an act of mercy. The surrounding scene and figures were to represent life in the Dolomites in the 1900s.