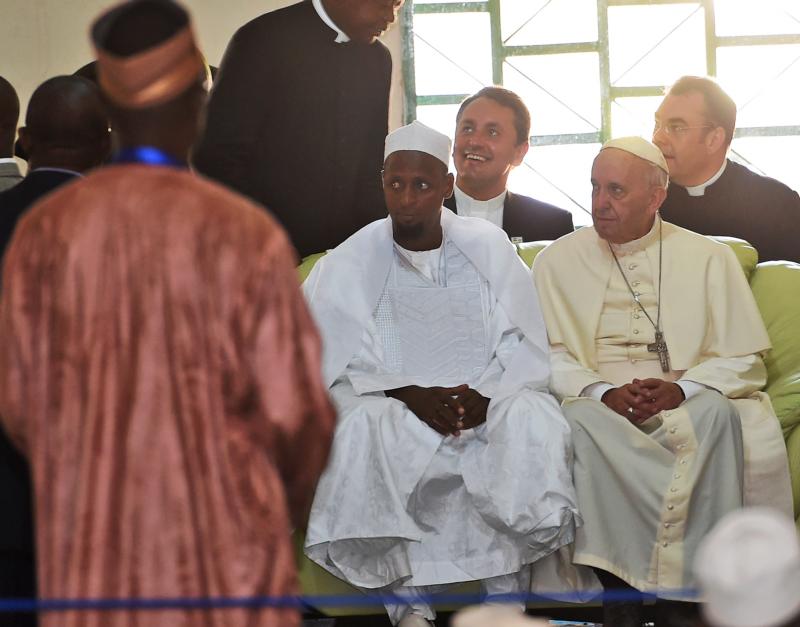 “No guns or grenades sounded during the visit — and while some unfortunate incidents occurred afterward, there was no resort to open violence,” said Msgr. Cyriaque Gbate Doumalo, secretary-general of the bishops’ conference.

“The pope came with a simple message that Christians and Muslims can fraternally live together in peace and harmony, despite what’s happened here. I think this has touched the Muslim community and given us a real chance.”

He said the bishops’ conference president, Archbishop Dieudonne Nzapalainga of Bangui, had been well received Dec. 9 when he and three priests walked through the mostly Muslim neighborhood known as PK5 to “check the situation” and encourage Christian-Muslim ties.

“Access to PK5 has long been blocked, but since the Holy Father’s departure, people have been coming and going freely again,” Msgr. Doumalo told CNS Dec. 11.

“Our church is trying to protect and nurture the capital of dialogue and social cohesion which the pope bequeathed to us. We hope economic life will now also resume, as fears and hostilities are overcome, and a definitive peace allows reconstruction in our country,” he said.

Pope Francis visited Bangui’s central Koudoukou mosque, protected by armed U.N. peacekeepers, and urged Christians and Muslims to act like “brothers and sisters” and “say no to hatred, revenge and violence, particularly violence perpetrated in the name of a religion or of God.”

He also visit a camp for displaced people near the mosque and rode around a Muslim neighborhood with Imam Tidiani Moussa Naibi.

Intercommunal fighting in September left many dead in PK5.

After his visit, Archbishop Nzapalainga told the Jeune Afrique weekly he “walked in this neighborhood as a pilgrim of peace, inviting people to rebuild this country on the reconciliation and mercy Pope Francis offered us.”

“The pope has profoundly affected the Muslim community, and the Muslim youth of PK5 have laid down their weapons to speak with their Christian brothers,” he said. “If each side tried to make an effort, life could resume its course like before, when there was no reason to distinguish between Christians and Muslims.”

Msgr. Doumalo told CNS he had not heard about a “nonaggression pact” allegedly signed by rival militias before the papal visit, adding that he doubted the accuracy of a Dec. 10 report in a Rome-based news outlet.

“Whether Christians or Muslims, we’re all Central Africans — the objective now is to choose a head of state capable of ensuring a peaceful future which can allow our people to move forward,” he told CNS. “The crisis has run very deep here, so we can’t expect normal life from one day to another. But Central Africans are religious people by nature, and with the pope’s message of peace to aid us, we can now begin to put aside our differences.”

Presidential elections, postponed from October, are scheduled Dec. 27 and are seen as crucial to ending the Central African Republic’s three-year civil war.

During his trip, Pope Francis prayed that the elections, in which several candidates have attracted interfaith support, would help make the Central African Republic “a welcoming home for all its children, regardless of ethnic origin, political affiliation or religious confession.”