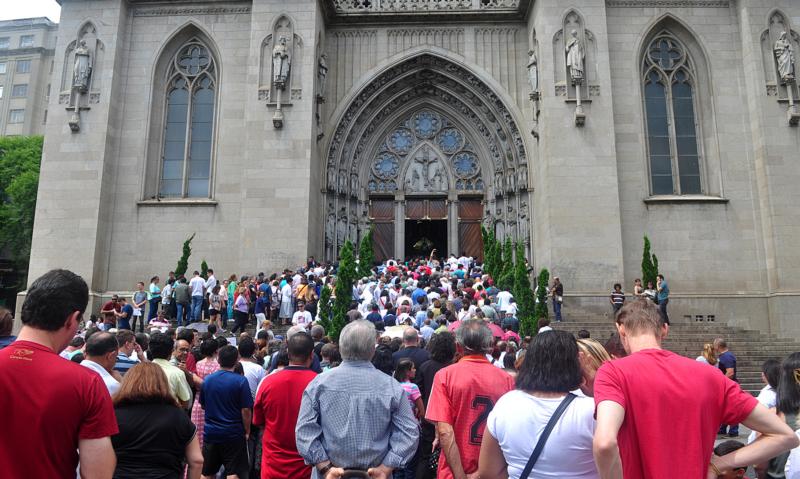 QUEBEC CITY (CNS) — North America’s only Holy Door was reopened at Notre-Dame Cathedral for the Jubilee of Mercy, with Cardinal Gerald Lacroix calling it “a sensible and tangible sign of our God’s open heart, from which springs and flows the wide river of mercy.”

“May all those who will walk through this door during the Jubilee of Mercy, whether they are faithful or far from the faith, experience an encounter that will allow them to let themselves be loved by a God that only desires their happiness,” the cardinal told hundreds of people at the cathedral Dec. 12.

The cardinal celebrated Mass for a packed cathedral that included Quebec Premier Philippe Couillard, whose bodyguards were discreetly placed all around the church.

Across the Americas and around the world, Doors of Mercy were opened Dec. 12-13, just days after Pope Francis officially opened the Holy Year of Mercy at the Vatican. For the Holy Year, Pope Francis allowed each bishop of the world to declare the doors of major churches and sanctuaries a “Door of Mercy.”

In Sao Paulo, hundreds stood outside the cathedral Dec. 13 to see Cardinal Odilo Scherer open the Door of Mercy and usher in the Year of Mercy. The cathedral was one of six Sao Paulo churches that had doors of mercy opened that day.

Maria Aparecida de Jesus, 73, sat on the steps of cathedral in the 80-degree heat, waiting for the moment when she would be able to walk through the Door of Mercy.

“I am very happy to see this day,” she told Catholic News Service. “God knows we need to be forgiven for all the pain and suffering we have been causing each other this year, with all the wars and bombs.”

She said the opening of the Door of Mercy was a sign Pope Francis wants to reach all Catholics.

“I am poor and will never have the opportunity to go outside Brazil, much less to the Vatican to walk through the doors,” she said, “but Pope Francis gave me a gift, and let the ‘doors’ come to me.”

Alessandra Paiva Cerf also waited for the procession and the opening of the doors. She came with her two children, her husband, mother and mother-in-law.

“It is a family outing,” she said, adding that she tries to teach her children “God welcomes us despite our sins.” Cerf’s daughter, Samara, 11, said her parents have explained to her about the Year of Mercy and that she felt blessed to be watching the procession.

“At times like these, with all the violence, the doors need to be opened everywhere,” Cerf said.

Cardinal Scherer told parishioners who filled the cathedral, “God is a loving and compassionate Father.”

He said Catholics must take the time this year to seek the hand of God and go toward him.

“This is a year of joy, a year where Catholics seek to include in their daily lives the presence of God, always,” Cardinal Scherer told Catholic News Service after the ceremony.

In Quebec, Cardinal Lacroix said in his homily that the Gospel expresses people’s “desire to live in joy, this aspiration for peace and serenity that manifest the deepest part of our being need to be converted. This is why we need to contemplate the mystery of mercy.”

“Throughout this Holy Year, let us open our eyes to see the suffering of the world, the wounds of our brothers and sisters, (and to) listen to the cries of victims of violence and war,” he said.

At the end of the celebration, Cardinal Lacroix explained that he would be exiting the cathedral through the Holy Door, which is usually not allowed. This was meant as a symbol to tell Christians to go speak of God’s mercy to the world.

Hundreds of people lined up outside in the cold Quebec City night to be the first ones to go through the door.

The atmosphere was festive. A group of Filipinos from Toronto was chatting cheerfully as they made their way to the Holy Door. When asked what motivated 52 people to come by bus from Toronto to Quebec City, an eight-hour ride, specifically for the opening of the Holy Door, Marie Soriano, the group’s organizer, simply answered “because of our faith.”

Contributing to this story were Philippe Vaillancourt of Presence info in Quebec and Lise Alves in Sao Paulo.