Vatican officials to be called to testify at ‘VatiLeaks’ trial 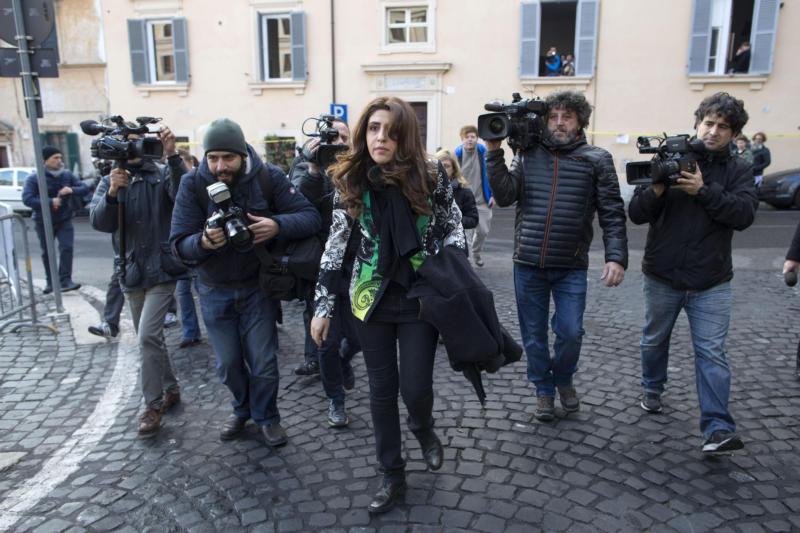 Italian laywoman Francesca Chaouqui, a member of the former Pontifical Commission for Reference on the Organization of the Economic-Administrative Structure of the Holy See, arrives for the third hearing of the"VatiLeaks" case at the Vatican Dec. 7. (CNS photo/Massimo Percossi, EPA)

VATICAN CITY (CNS) — Vatican judges have granted a request by one of the defendants to have several prominent Vatican officials take the stand and testify in the so-called “VatiLeaks” trial regarding the leaking and publication of confidential documents.

Following deliberations Dec. 7, Giuseppe Dalla Torre, the presiding judge, along with three other Vatican judges, agreed to the request made by Francesca Chaouqui, a defendant who was a member of the former Pontifical Commission for Reference on the Economic-Administrative Structure of the Holy See.

The witness list requested by Chaouqui’s lawyer, Laura Sgro, was granted despite objections made by Vatican prosecutors. However, the judges said that they may only take the stand to testify on specific matters regarding the case and not as character witnesses for Chaouqui.

The officials who will be called to testify are: Cardinal Pietro Parolin, Vatican secretary of state; Cardinal Santos Abril Castello, president of the cardinal’s commission that oversees the Institute for Religious Works; Archbishop Konrad Krajewski, the papal almoner; Auxiliary Bishop Augusto Lojudice of Rome; and Msgr. Alfredo Abbondi, an official at the Prefecture for the Economic Affairs of the Holy See.

In requesting the appearance of top Vatican officials, Sgro argued that Chaouqui’s alleged “actions were in the Holy Father’s interests.” Sgro also argued that the Vatican court did not have jurisdiction over the matter given that the alleged crimes took place in Italy and not within Vatican City State. Sgro cited Article 22 of the Lateran Treaty, saying that as a self-declared “political refugee,” Chaouqui should be tried in an Italian court.

Vatican prosecutor Gian Piero Milano argued that Chaouqui’s lawyer misinterpreted the Lateran Treaty law given that there is no doubt that her alleged crimes fall within the jurisdiction of the Vatican courts. He also argued that by presenting herself to investigators and the court, Chaouqui recognized the validity of the Vatican’s jurisdiction. The judges overruled both objections made by Sgro.

Lawyers for the five defendants presented their requests and objections in court after spending several days reviewing the charges and preparing their defense.

Along with Chaouqui, the defendants present were: Spanish Msgr. Vallejo Balda, secretary of the Prefecture for the Economic Affairs of the Holy See; Nicola Maio, who served as personal assistant to Msgr. Vallejo Balda when he worked on the commission; and the journalists, Nuzzi, author of “Merchants in the Temple,” and Fittipaldi, author of “Avarice.”

Msgr. Vallejo Balda, Chaouqui and Maio are accused of forming an “organized criminal association” with the aim of “committing several illegal acts of divulging news and documents concerning fundamental interests of the Holy See and (Vatican City) State.”

Under the Vatican criminal code, it is a crime to take, distribute and publish confidential documents.

Fittipaldi and Nuzzi are accused of “soliciting and exercising pressure, especially on (Msgr.) Vallejo Balda, in order to obtain confidential documents and news,” which they then used for their books. The books went on sale in early November.

To allow the defendant’s lawyers time to review documentation, including e-mails and text messages exchanged by their clients, the Vatican court granted a recess and did not announce a date for the next session of the trial.

Shortly after the court adjourned, Jesuit Father Federico Lombardi, Vatican spokesman, said in a statement that the defendants will be guaranteed a fair trial under the Vatican’s judicial system and described as “inappropriate” and “entirely unjustified” reports that their right to an adequate defense was in question.

“In this respect, it is necessary to avoid a basic mistake: the current Vatican legislation, applied by the legal authorities, is perfectly in line with procedural law in the majority of jurisdictions throughout the world,” he said.