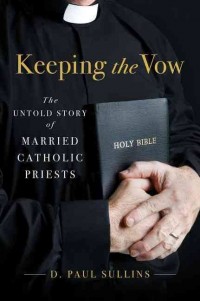 The author is in that group; married with three adult children, he became a Catholic priest in 2002. He is a sociology professor at The Catholic University of America in Washington.

In 1980, the Vatican created a pastoral provision allowing the U.S. to admit into the Catholic priesthood former Episcopal priests who have become Catholic. Since that time, at least 80 priests along with their wives and children have made this transition. Most of them serve in dioceses in the Southwest, many of them in Texas in the Dallas-Fort Worth area.

The transition is not easy. Former Episcopal priests are extensively tested for their suitability to serve in the church and for the stability of their marriages. But research shows that these priests have integrated successfully into Catholic parishes. The expected uneasiness of parishioners and the resentment by single, celibate priests have not materialized. The wives of these priests also testify that they have been welcomed in their new parishes.

But this transition comes at a price; married priests cannot serve as pastors to a parish, only as associate pastors. They cannot hope to rise in the church’s hierarchy and many of them must accept smaller salaries. At the time that these priests came into the Catholic Church, there was no health insurance benefit for spouses and children of clergy and no scholastic assistance for their children as there was in the Episcopal Church.

The priestly provision was never intended to solve the problem of the shortage of priests and hasn’t done so. But it has given bishops another model for priesthood that has proved to be successful beyond the single, celibate model and that in itself is valuable.

PREVIOUS: Does sex sell? Possibly not, and neither will violence

NEXT: ‘The Finest Hours’ is a fine film rendering of the greatest rescue