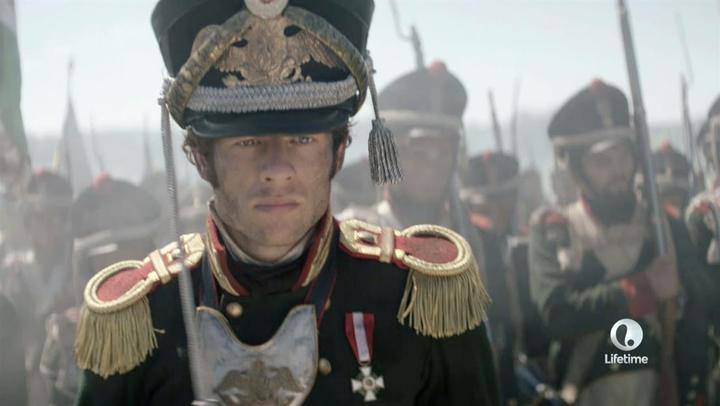 NEW YORK (CNS) — Published in 1869 by Russian author Leo Tolstoy, “War and Peace” unquestionably ranks as one of the central works of world literature. Many, in fact, regard it as nothing less than the greatest novel ever written.

Given the book’s towering reputation, it’s hardly surprising that its first film adaptation, a Russian production led by Vladimir Gardin, appeared as early as 1915 — while Tsar Nicholas II still reigned over his empire. Yet the epic scale of Tolstoy’s masterpiece makes it an unwieldy fit for the traditional format of feature films.

Thus, at just under three-and-a-half hours, director King Vidor’s 1956 version — featuring Audrey Hepburn, Henry Fonda and Mel Ferrer — was far longer than ordinary Hollywood fare. And Soviet helmer Sergei Bondarchuk’s mid-1960s take, in which he also starred, topped out at more than twice that length. It was made more digestible by being divided into four parts.

Tolstoy’s sweeping yet involved tale — set amid the tumultuous events of the Napoleonic Wars and portioned out among five aristocratic Russian clans — would seem to lend itself more easily to the broad confines of a television miniseries. Even so, a 1972 BBC production starring Anthony Hopkins took a genre-busting 20 episodes and 15 hours to recount the classic narrative in full detail.

Seen in the context of that long-ago forerunner, the latest small-screen iteration — also a BBC project, produced in conjunction with the Weinstein Co. — seems positively modest in length, consuming only eight hours across four nights.

For the most part, adult viewers investing that time will be well-rewarded. The series, which premieres Monday, Jan. 18, 9-11 p.m. EST on the A&E, Lifetime and History cable channels, successfully translates a literary standard into a television treat.

While the aesthetics of this “War and Peace” are just right, however, the moral content is more mixed.

To accentuate the positive, the partnership between veteran screenwriter Andrew Davies and youthful director Tom Harper yields an approach both respectful and fresh. Among the uniformly satisfying performances, Paul Dano’s turn as Pierre Bezukhov, the all-too-trusting heir to a great fortune, is particularly noteworthy.

Though enjoyable enough, and certainly not a disappointment, Lily James’ interpretation of sunny Natasha Rostova — whose optimism is put to the test by her desperate need to make a profitable marriage — seems no great departure from her familiar role as Rose on “Downton Abbey.”

Fans of the lavish lifestyle played out at that stately home will appreciate the palatial dwellings and ornate costumes of “War and Peace.” They’re matched by stunning footage of the Russian and Lithuanian landscapes against which the story unfolds.

The use of fluid continuous camera movements during society party scenes, moreover, helps to highlight the elegance of the characters’ vanished world. Overall, the cinematography is beautiful and Harper’s direction engaging.

Thematically, it’s intriguing to note how the issues at the center of “War and Peace” continue to resonate in today’s world, despite the passage of nearly 150 years. For all their opulence, the lives of Tolstoy’s nobles are marked by a degree of social, political and spiritual confusion that seems all too familiar.

And the historic dangers of extreme economic divisions within a society (Pierre and his friends are, as we know, waltzing on a volcano) provide a sobering counterpoint to all the surface frivolity.

What should have been the broad appeal of this production — the well-staged battle scenes are violent but not excessive — is restricted, however, by a needless emphasis on some unsavory behavior among the characters.

Ranging from seduction and adultery to incest, these transgressions — absent from the first half of the opening episode but introduced afterward — have apparently been brought to the fore in an attempt to spice the story up for a generation with jaded tastes and shockproof sensibilities.

That decision costs younger viewers the opportunity to enjoy an otherwise high-quality screen version of Tolstoy’s enduring work. Even some adults may find their enjoyment of the series, which continues Mondays through Feb. 8, 9-11 p.m. EST each night, marred by the energetic script’s wayward undertones.

PREVIOUS: For a horror movie, ‘The Forest’ isn’t very scary

NEXT: New six-part video series on creation now available on disc and online