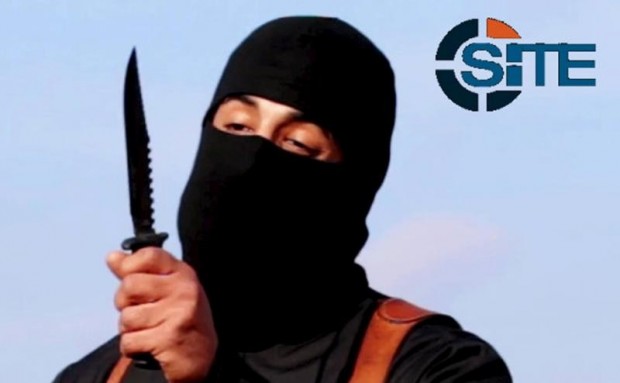 A masked, black-clad militant, identified as a Briton named Mohammed Emwazi, brandishes a knife in this still image from a 2014 video. Cardinal Vincent Nichols of Westminster planned to tell delegates at a London conference Jan. 28 to guard against the Internet recruitment of vulnerable secondary school students by the Islamic State group. (CNS photo/SITE Intel Group Handout via Reuters)

Cardinal Vincent Nichols of Westminster planned to tell delegates at a London conference to guard against the Internet recruitment of vulnerable secondary school students by the Islamic State.

The cardinal was to speak to the Secondary Leaders’ Conference of the Catholic Association of Teachers, Schools and Colleges and the Catholic Education Service at London’s Amba Hotel Jan. 28, but he released his text Jan. 26.

A combination of naivety, isolation, loss of shared values and easy access to the Internet are making children in their early teens prime targets for the terror group, his speech said.

It said that from his discussions with young people who have flirted with invitations to join Islamic State, he had learned that children, typically ages 14 or 15, were being recruited at astonishing speed.

“One said that it was clearly possible to bring a person to the point of being willing to leave all for the sake of their newfound cause, even to the point of embracing violence or suicide, within a four- or five-week period,” Cardinal Nichols said in his text.

“One month is all it takes to transform a dissatisfied and disorientated teenager into a terrorist,” he added.

The speech described how one high-achieving girl he spoke to was dissuaded from joining Islamic State at the last minute and only after long discussions “about what she wanted in life and what she stood to lose.”

The text told educators that jihadis were targeting such children because they considered them to be “clean skins,” people “as yet unformed by substantive values, left ‘value-free’ by their life thus far.”

“It is to teenagers such as these that the call of a definitive, demanding faith, one which asks for a heroic sacrifice in a wide cause for victory … is cast as a true fulfillment of all the unfocused yearning within them,” the speech said.

Many recruits, the text said, were isolated by the modern world and often wished to be part of something greater, and “may be finding life to be rather flat, functional and boring.”

Islamists use the Internet to propose the existence of “a coherent, or at least seemingly coherent, whole” and to focus vulnerable teenagers into a narrative “which compels and captivates.”

“This is the skill that can obviously be put to good use, but it is also the skill of the recruiters of violence,” Cardinal Nichols said in his text.

Catholic educators, the cardinal said, must have the courage to propose an authentic Christian purpose to young people that is equally as captivating as the false narrative of the terrorists.

The Catholic vision would include the cultivation of a relationship with Jesus, he added, and the development of a sense of Christian vocation.

“The degree to which you achieve this, as many of you do, is the degree to which our schools will never be sending into the world ‘clean skins’ ready to be seduced by a corrupt and inhuman ideology, or by any other lesser versions of violence and degrading inhumanity that stalk our streets and our world today,” he said in his text.

Police in Britain believe that at least 700 British Muslims have joined Islamic State in Syria and Iraq. Many of these have returned to the United Kingdom, but about 100 have been killed.

They include Mohammed Emwazi, or “Jihadi John,” who was filmed beheading U.S. and British captives before he was finally blown up in November by a missile fired from a U.S. drone.

The British public repeatedly has been shocked by reports of the prevalence of British converts among the ranks of the jihadis.

Although converts make up 4 percent of Britain’s 2.7 million Muslims, they represent 11 percent of those convicted of terrorism offenses.

One of the most high-profile cases is that of Michael Adebowale and Michael Adebolajo, converts from Christianity who were jailed for life for the murder of Lee Rigby, an off-duty soldier, in 2013.

The government is attempting to counter the rise of Islamic extremism in schools by making sure that such “British values” as tolerance, freedom and respect for the rule of law are taught from an early age.

NEXT: Pope: Patch up family feuds, forgive, let go of painful past