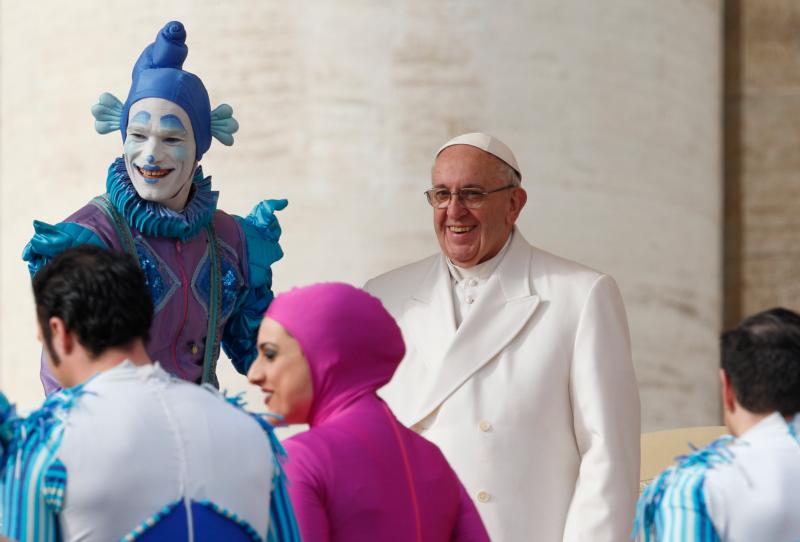 VATICAN CITY (CNS) — Let the Year of Mercy be the time to end all family feuds, to forgive each other and let bygones be bygones, Pope Francis said.

“I think about so many brothers and sisters who are estranged from their families; they don’t speak to each other,” he said during his weekly general audience in St. Peter’s Square Jan. 27.

“This Year of Mercy is a good occasion to meet up again, to embrace each other and forgive each other, to leave bad things behind,” he said.

The pope continued a series of talks dedicated to divine mercy, looking specifically at how God has always been faithful and merciful toward his people.

God never ignored the Israelites’ cry of suffering and he sent Moses as a “mediator” on his behalf to free his people and lead them to salvation, the pope said.

“We can do this work, too, during this Year of Mercy, of being mediators of mercy with works of mercy” that bring people together, foster unity and offer people comfort and relief, he said. There are “so many good things people can do.”

“Mercy can never remain indifferent before the suffering of the oppressed, the cry of those who are exposed to violence, reduced to slavery, condemned to die,” he said.

Such suffering has existed throughout history, including in today’s world, he said, and that can often make people feel “helpless, tempted to harden their hearts and think about other things.”

God, however, is never indifferent, as he always fixes his gaze upon those in pain and intervenes by helping people become aware of and involved in the lives of those who suffer and are oppressed, he said.

In remarks to pilgrims from Iraq and other nations in the Middle East, Pope Francis again highlighted that God is not deaf to the plight of those facing “injustice and persecution.”

God always “intervenes and gives, with his mercy, salvation and assistance,” the pope said. “He practices patience with the sinner in order to bring about conversion and he seeks the lost until they return because he ‘wills everyone to be saved and to come to knowledge of the truth.'”

“May the Lord bless all of you and protect you from evil,” he said.

The pope also invited Catholic individuals and groups who are involved in charitable service to take part in a day of spiritual retreat.

Individual dioceses will be sponsoring such events during Lent, he said, and he asked people to take advantage of the special occasion to reflect more deeply on God’s mercy and become more merciful.

The pope also greeted German-speaking pilgrims during the audience and welcomed members of the Independent Commission for the Protection of Victims in Austria, including Cardinal Christoph Schonborn of Vienna and Bishop Klaus Kung of Sankt Polten. The national commission was launched by the bishops in 2010 to investigate allegations of sexual abuse by clergy.