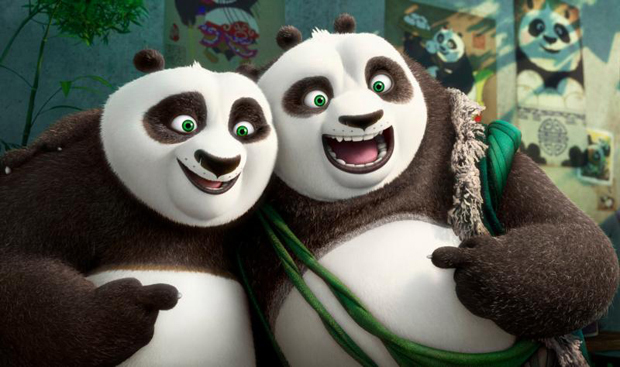 NEW YORK (CNS) — Though it boosts family values and the importance of teamwork, the animated adventure “Kung Fu Panda 3” (Fox) also incorporates non-scriptural philosophical ideas that might confuse the impressionable youngsters at whom it’s primarily aimed.

At least some of these concepts could have been spotted lurking in the background of the movie’s two predecessors, released in 2008 and 2011. With this latest installment, however, they come obtrusively to the fore.

The story into which they’re incorporated finds the hero of the earlier chapters, ungainly but good-hearted panda Po (voice of Jack Black), fully established as the most unlikely of martial arts masters. Yet, though he may have fulfilled his destiny by taking on the role of the prophesied Dragon Warrior, Po still has more to learn.

That point is driven home when his undersized mentor, Shifu (voice of Dustin Hoffman), leaves Po in charge of training the Furious Five, the band of fellow black belts who have aided him in the past. His attempt to instruct this quintet — voiced by Angelina Jolie Pitt, Jackie Chan, David Cross, Seth Rogen and Lucy Liu — swiftly degenerates into a humbling disaster.

A more promising development comes about when Po is joyfully reunited with his biological father, Li (voiced by Bryan Cranston). Though their fortunate crossing of paths answers the questions about his identity that had preoccupied Po in the last outing, this newfound relationship does nothing to diminish Po’s affection for — or loyalty toward — his kindly adoptive father, dumpling vendor Mr. Ping (voice of James Hong).

The main portion of the film is devoted to Po’s face-off with hulking, power-hungry villain Kai (voice of J.K. Simmons). A sort of Viking on steroids, Kai was originally an ally of Oogway (voiced by Randall Duk Kim), the tortoise who invented kung fu. But his misuse of the life force known as Ch’i has turned Kai into an evil aggressor armed with supernatural powers.

It’s at this point that directors Jennifer Yuh Nelson and Alessandro Carloni’s visually pleasing film begins to become problematic for viewers formed by a Judeo-Christian worldview. Is Ch’i — which is shown to endow those who wield it with the ability to alter physical reality — easily overlooked as an ingredient of this franchise’s self-contained mythology, a notion no more threatening than the “Force” of the Star Wars movies?

Some may choose to take it that way. But parents will note other aspects of screenwriters’ Jonathan Aibel and Glenn Berger’s story that are equally or perhaps more difficult to reconcile with an outlook based on revealed truth.

These include a personified universe that communicates with the characters as well as an accessible “spirit realm.” The latter is at once an alternate universe to which the living can travel and a form of afterlife to which the good and the wicked are consigned indiscriminately.

The script also promotes a version of self-improvement that diverges significantly from the biblical model of moral advancement. In place of the need to conform to external and unchanging ethical principles, the dialogue offers an inward looking scheme of betterment based exclusively on being true to oneself.

This reaches its most extreme expression in “Try,” the song that accompanies the closing credits. Though they include the admonition, “Just do what is right,” the lyrics go on to declare, “When you believe in what you’ve got, you’re perfect/Just be who you are.”

That message can form the basis for a useful discussion with teens, one that might balance Catholic belief in the fundamental goodness of human nature, despite the wounds of original sin, against the vocation to model ourselves on the soaring perfection shown us in the person of Jesus. As for younger kids, however, while they’re the demographic most likely to appreciate the movie on its face, their elders may do well to steer them in another direction.

The film contains mythological themes alien to a Christian worldview, cartoon violence and at least one mildly scatological joke. The Catholic News Service classification is A-II — adults and adolescents. The Motion Picture Association of America rating is PG — parental guidance suggested. Some material may not be suitable for children.

PREVIOUS: ‘The Finest Hours’ is a fine film rendering of the greatest rescue

NEXT: ‘Young Messiah’ filmmakers had blessing from author who inspired it