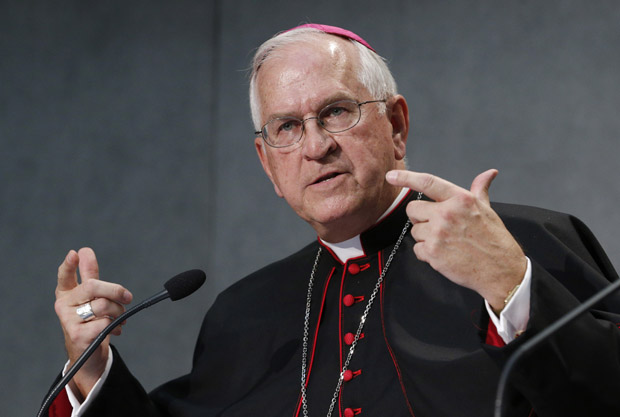 EL PASO, Texas (CNS) — The supposed political hues of Pope Francis’ visit to Ciudad Juarez, Mexico, recently raised by a U.S. presidential candidate and media coverage of those remarks came up during a news conference with Catholic officials in El Paso Feb. 17.

Just hours before the pope was to be at the Juarez fairgrounds, Archbishop Joseph E. Kurtz of Louisville, Kentucky, president of the U.S. Conference of Catholic Bishops, led a five-member panel in discussing the “Two Nations, One Faith” event hosted by Catholic Extension.

In his remarks, the archbishop said, “I think it is so important to move a step away from the political fray, to go a little deeper and see the moral implications and the moral values.”

The event, at the Sun Bowl on the campus of the University of Texas at El Paso, was taking place at the same time as papal events in Juarez. Later, Archbishop Kurtz joined other Americans on the levee in El Paso when Pope Francis celebrated Mass in Juarez.

Most of the news conference topics dealt with the message Pope Francis was bringing to Juarez — and by extension to El Paso, its sister city across the Rio Grande.

“In many ways, we have so many things that divide us as a culture,” said Archbishop Kurtz, “and yet here we are, fellow pilgrims with our Holy Father working and moving toward Christ. …

After each church official made a short statement focusing mainly on the papal visit’s pastoral aspects, the third question from the media raised the issue of Pope Francis’ visit being viewed as a political act. It received ample discussion.

Addressing Archbishop Kurtz, a reporter acknowledged the prelate had described the papal visit as pastoral but also noted the trip was being mentioned “many times” in the presidential campaign. “How can we avoid addressing those issues, especially when (a candidate) brings up that he (the pope) is very political and doesn’t understand what’s going on?” the reporter asked.

Archbishop Kurtz went on to stress the fact that people who have crossed the border are first of all human beings, and in all cases they need to be treated with respect, compassion and dignity.

“We need to make room for the message of the Holy Father, we don’t need to restrict it and make it into something that is simply political,” the archbishop said. “Moral things have political implications, we know that, but more basically, this is a moral dimension.”

He also said that he “would love to see the immigration ‘debate’ move to ‘dialogue.'”

“And dialogue doesn’t preclude that people might have different opinions,” Archbishop Kurtz said. “Dialogue says, ‘As I bring my convictions, let me test them with reality and make sure that I’m seeing the people with whom I’m in dialogue so that we can come up with the lasting solutions.'”

Father Jack Wall, president of Catholic Extension, gave the migration issue a more global view, contrasting the migration panorama of the 1970s — when there were 3 million refugees in the world — and today’s situation.

“There are tens of millions refugees in the world,” he said. “We have to come up with solutions and responses. … They will be political (and) economic.”

Other participants in the news conference included Archbishop John C. Wester of Santa Fe, New Mexico; Sister Norma Pimentel, executive director of Catholic Charities of the Rio Grande Valley, in the Brownsville Diocese; and Auxiliary Bishop Eusebio L. Elizondo of Seattle, who is chairman of the USCCB’s Committee on Migration.

Sister Pimentel, a Missionary of Jesus from McAllen, has assisted unaccompanied minors and families who have crossed the border each day at Sacred Heart Church in McAllen. She met Pope Francis in New York during his U.S. visit last September and before that also spoke to him through a video town hall meeting with the pope filmed by ABC News.

NEXT: EWTN, other Catholic entities lose appeal on HHS mandate