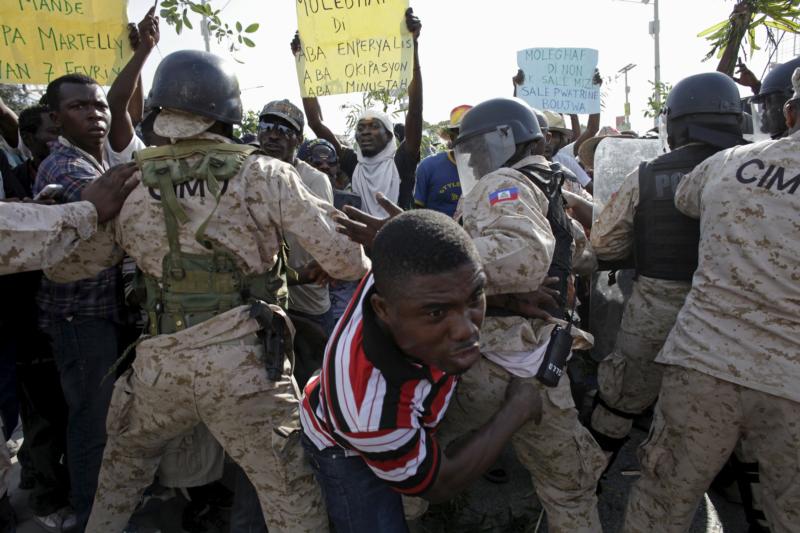 A man crosses a police cordon during a protest against the government and the electoral process Jan. 29 in Port-au-Prince, Haiti. Haiti's Catholic bishops urged political leaders to reach a negotiated solution to the country's looming political crisis as President Michel Martelly's term ends Feb. 7 and elections to find a successor have been indefinitely delayed. (CNS photo/Andres Martinez Casares, Reuters)

“It is high time that the people know how we will run the country after that date,” the bishops said in a statement released Feb. 1 after meeting in an extraordinary assembly.

The church leaders urged that a “mutually acceptable” agreement must be reached quickly “with wisdom, insight, moderation and patriotism.”

“It is imperative to prepare all the Haitian people to manage the coming days as responsible citizens,” the bishops said in calling the country “to come together in order to reach an agreement based on the constitution and Haitian wisdom to ensure the continuity of the state and political stability of country in the respect for life, property and fundamental rights of the human person.”

The bishops pledged to accompany Haitians on “the path to dialogue, peace and development.”

The crisis has grown since the first round of elections in October to determine which candidates would have faced off in December. The vote later was delayed until Jan. 24, then was called off by the country’s electoral commission over safety concerns.

Martelly is constitutionally prohibited from seeking re-election, and his term ends Feb. 7. He has backed little-known candidate Jovenel Moise, who won the first round of voting with about a third of the vote. Moise remains the favorite.

However, opposition candidate Jude Celestin, who finished a close second to Moise, has refused to campaign, charging that the government was working against him.

Haiti’s 213-year history has been marred by discord and conflict. The country suffered one of its most severe setbacks in 2010 when a devastating earthquake claimed tens of thousands of lives and left more than 1.5 million people homeless in Port-au-Prince and its surroundings. Hundreds of people continue to live in tent camps that popped up after the disaster.

Martelly has been criticized by opposition leaders, who cited his inability to live up to campaign promises to remake Haiti’s image in the wake of the earthquake. He also has alienated many former supporters because of his brashness and go-it-alone attitude.

PREVIOUS: God wants to save you; will you let him? pope asks