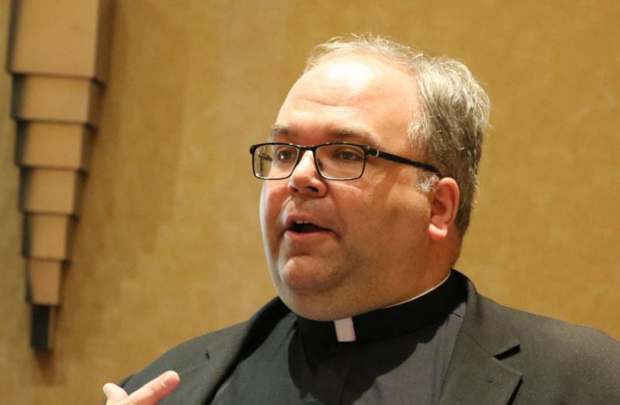 Father Philip Bochanski, associate director of Courage International, speaks Feb. 2 about his ministry to homosexuals at a meeting at in Warrington, England. (CNS photo/Simon Caldwell)

WARRINGTON, England (CNS) — The Catholic Church’s pastoral ministry to gays is rapidly developing and expanding as Western societies become more secular, said a U.S. priest at the forefront of working with gay people.

Father Philip Bochanski, a Philadelphia priest who serves as associate director of Courage International, said increasing numbers of people who “experience same-sex attraction” but who wished to live chaste lives were turning to the church for help.

The demand has resulted in Courage, a Catholic organization dedicated to the pastoral care of homosexuals, spreading from a single chapter founded in New York in 1980 to more than 150 chapters worldwide, with increasing interest from dioceses around the world seeking to set up their own chapters.

Each year, the group works with more than 2,000 people who experience same-sex attraction to conform their lives to the demands of the Gospel.

“As the culture becomes more secular, we find individuals in the culture making decisions for themselves to come and seek help,” Father Bochanski told Catholic News Service Feb. 2. “We are not trying to fix or cure anybody. We are just trying to walk with them.”

Father Bochanski said many people who felt unhappy with their lifestyle often felt isolated by a “gay-affirming” culture and were “looking for a home.”

He said that as a result, “our Courage groups are growing.”

“Since last summer, between 12 and 15 new chapters have been set up in (the United) States,” he said. “Also, the number of dioceses requesting programs for their priests is growing.”

“Our primary work and concern is just to provide a welcome in a pastoral context,” Father Bochanski said. “For a person experiencing same-sex attraction who comes to the realization that they need to live a chaste life, to do that in the world can be very lonely and overwhelming at times, and we try to accompany them through that and try to support them by listening, by sharing experiences and by giving spiritual direction and offering the sacraments.”

“I think it is clear that this is a bigger part of the conversation in the culture these days, so the question is, ‘Are people just talking about it more or are more people experiencing a same-sex attraction?'” he said.

“Those figures are hard to come by in terms of percentage of the population, but it’s not surprising that — as we live in a culture that’s marked more and more by broken families, by absent fathers, by parents who have children without being married, and so there is little stability in some homes these days — that these family dynamics have a deep impact on a child’s sense of being safe, being loved, of having a permanent connection of belonging and being affirmed,” he said.

“In my experience, all these things factor in when someone is disposed to develop a same-sex attraction,” he continued. “The breakdown of the family generally can certainly be connected to a higher prevalence of people experiencing those attractions.”

Many of those who approached the church were “hurting” or were wary that they would be accepted by parishes, said Father Bochanski.

“It is the part of my ministry where I feel most fatherly,” he said. “To be asked to walk this path with them is a great privilege for me.”

Father Bochanski, 42, spoke to CNS during a tour of four dioceses in England, Scotland and Ireland, where he had been invited to advise clergy on the pastoral care of homosexuals.

His visit included the Diocese of Shrewsbury, England, where he spoke to lay Catholics during a meeting in Warrington Feb. 2 before addressing clergy Feb. 3.

He said he believed that priests “want to be faithful to what the church teaches, and they want to be welcoming and compassionate to the people that they serve.”

While “the conventional wisdom is that you can’t do both,” Father Bochanski said Courage gave clergy the knowledge and the vocabulary to explain the church’s authentic teaching in a compassionate way.

It is firmly rooted in the interpretation of Catholic teaching on sexuality and morality set out in the Catechism of the Catholic Church and considers the universal call to chastity to be “absolutely essential,” he said.

NEXT: Pope asks Mexican people for time alone with Our Lady of Guadalupe