Pope goes to confession, and wants you to as well 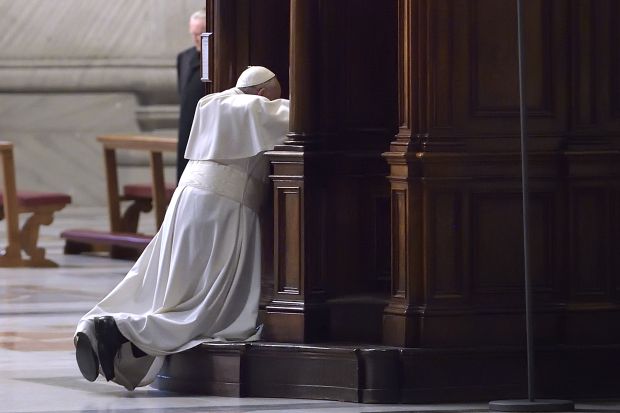 For Pope Francis, the Year of Mercy is all about sharing the experience of God’s mercy with others. But first, he wants people to experience it themselves, in the confessional.

Lent is the perfect time for that kind of spring cleaning and at the Vatican, in Rome and in many dioceses around the world, Catholic churches were to have extended hours for confessions March 4-5 in a project called “24 Hours for the Lord.” Afterward, for those who did not make it to a local church, there were still three weeks left before Easter.

The pope has said he goes to confession every two weeks, and he has done so very publicly, most noticeably in 2014 during a Lenten penance service in St. Peter’s Basilica. He also went Feb. 11, on the eve of his trip to Cuba and Mexico, when he stopped by the Basilica of St. John Lateran where the priests of the Diocese of Rome were holding their Lenten meeting. Pope Francis heard the confessions of several priests, then went to confession.

At St. John Lateran, as in almost every speech he has given to priests in the three years since his election March 13, 2013, Pope Francis gave the priests advice, exhortations and pleas that they dedicate time to hearing confessions and that they do so with warmth, care and a father’s love. He wants them to acknowledge the reality of the penitent’s sin, but pay even more attention to the penitent’s desire for forgiveness and a fresh start.

He spends less time telling Catholics to get to a confessional than he does telling priests they have a serious obligation to ensure the experience is not so horrible that the faithful never come back. A lot of that probably has to do with the fact that a turning point in his own life — and the beginning of his discernment about becoming a priest — began with an unplanned confession on the way to a school picnic when he was 17. He said he felt that the priest, whom he’d never seen before, was waiting there to show him God’s mercy.

Rather than trying to convince people that they are sinners who need to go to confession, Pope Francis tries to take seriously the reasons people say they do not go and gives them another point of view.

Embarrassment or shame is another reason people stay away from the confessional, which the pope sees as a normal feeling, but one that should be overcome. “Sometimes when you’re in line for confession, you feel all sorts of things, especially shame, but when your confession is over, you’ll leave free, great, beautiful, forgiven, clean, happy — this is what’s beautiful about confession,” he said.

In the recent book-length interview, “The Name of God Is Mercy,” Pope Francis also spoke about confession as an important means of helping people be truly honest before God. “It’s a way to be real and authentic,” he said. “We face the facts by looking at another person and not in the mirror.”

The pope repeatedly has told priests that in the confessional they should ask only questions that help penitents recognize their sins rather than conducting “a heavy, finicky and invasive interrogation.”

But that does not mean penitents should approach the sacrament without doing their own examination of conscience and even a detailed one.

In “The Name of God Is Mercy,” the pope was asked how one should prepare for confession. His answer: “He ought to reflect on the truth of his life, of what he feels and what he thinks before God. He ought to be able to look earnestly at himself and his sin. He ought to feel like a sinner, so that he can be amazed by God.”

NEXT: Seminary hosts Lenten program of music and Scripture