‘London Has Fallen,’ as has Hollywood’s moral vision 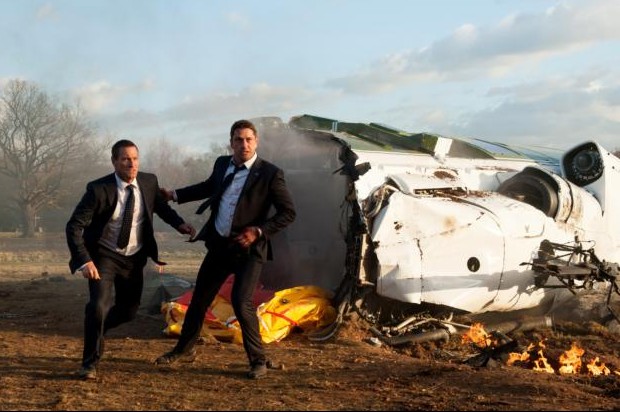 Gerard Butler and Aaron Eckhart star in a scene from the movie "London Has Fallen."(CNS photo/Focus Features)

Not to worry. With Mike at his side brutally dispatching bad guys, President Asher’s odds of survival are pretty good.

Mike’s wife, Leah (Radha Mitchell), may be pregnant with their first child, and he may be on the verge of resigning from the Service. But Mike could never shirk his duty, which, as portrayed here, entails a willingness to switch instantaneously into kill mode.

That may be true to life to a certain extent. Yet Mike’s ruthless treatment of the assailants targeting the leader of the free world seems excessive and even borders on sadism at times. The atmosphere becomes truly noxious when the script tries to find humor in his behavior.

After watching him stab or shoot scores of individuals, one image of Mike cradling his newborn won’t suffice to soften the character. The barrage of expletives he emits doesn’t help, nor does Butler’s inability to bring lighthearted charm to the cowboy-warrior.

Dashes of gravitas are provided by the return of Angela Bassett as Secret Service head Lynne Jacobs, and of Morgan Freeman, whose was Speaker of the House Trumbull and now serves as Asher’s vice president. And director Babak Najafi does make an effort to highlight the human relationships in the scenario.

It’s worth noting that the impetus for the London attack was a drone strike on Barkawi’s family compound during his daughter’s wedding. Carried out two years earlier by the United States on behalf of a coalition of Western nations, it resulted in the deaths of innocent noncombatants, as does the London melee.

American officials argue the drone strike was a mistake based on faulty intelligence. But overall the movie takes pains to justify the use of lethal force and to tout the righteousness of American values and military might.

Granted, action flicks aren’t the best source for ruminations on the ethics of violence or the efficacy of armed conflict. In fact, one sign of the movie’s belligerent agenda is revealed early on when — even before the drone attack on his home — Barkawi declares, “Vengeance must always be profound and absolute.”

“London Has Fallen” comes close to undercutting itself by showing that, no matter who seeks it, vengeance can never be large or meaningful enough, that it always leads to more violence, and that it’s rarely the stuff of first-rate entertainment.

The film contains pervasive and often gory scenes of combat, murder and torture, a revenge theme, some profanity and frequent rough and crude language. The Catholic News Service classification is O — morally offensive. The Motion Picture Association of America rating is R — restricted. Under 17 requires accompanying parent or adult guardian.

PREVIOUS: All creatures great and small can enjoy animated ‘Zootopia’

NEXT: ‘Easter Mysteries’ film to have one-night showing at select U.S. cinemas