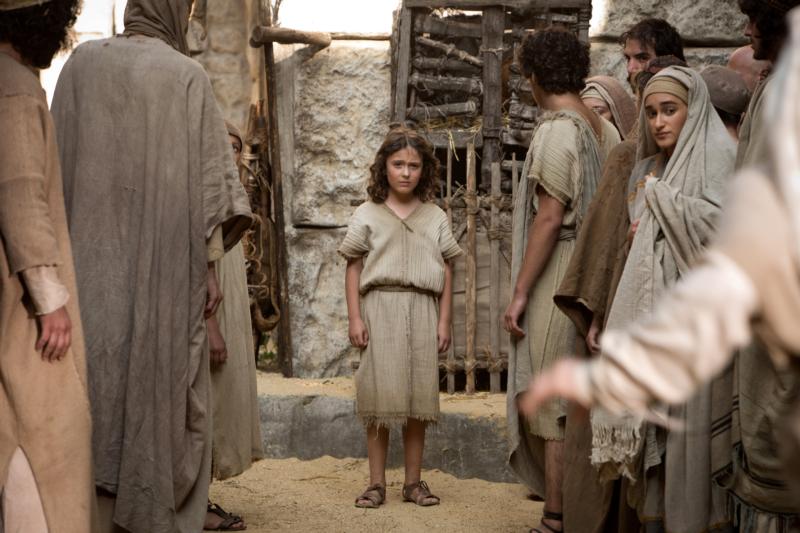 Adam Greaves-Neal stars in a scene from the movie "The Young Messiah." (CNS photo/Focus) See YOUNG-MESSIAH-(EMBARGOED)

NEW YORK (CNS) — It’s a seemingly glaring omission likely to strike even casual readers of the New Testament as disappointing: With the notable exception of the finding of Jesus in the Temple, the Gospel writers are entirely silent about their subject’s childhood.

Apart from this single incident, our only canonical information about the years between the Holy Family’s return from exile in Egypt and the beginning of Jesus’ public ministry consists of Luke’s general observation that, during this time, “Jesus advanced in wisdom and age and favor before God and man.”

While frustrating for scholars — and a happy hunting ground for those given to wild theories (Jesus in Tibet, anyone?) — this period can, nonetheless, provide a fertile field for speculation if handled in a careful way. A case in point: the engaging dramatization “The Young Messiah” (Focus).

Director and co-writer Cyrus Nowrasteh’s screen version of Anne Rice’s 2005 novel “Christ the Lord: Out of Egypt” sensitively explores the mystery of the Incarnation. By remaining faithful to the underlying message of Scripture even as it tackles a topic on which the Bible itself is mute, Nowrasteh’s script, written in collaboration with his wife Betsy, avoids the many theological pitfalls that surround the union of Christ’s divine and human natures.

The result is an intriguing, devotion-friendly piece of entertainment suitable for viewers of most ages. Families will welcome it as especially appropriate fare for Lent as well as the Easter season.

As the film begins, a combination of both ordinary and supernatural circumstances indicate to Joseph (Vincent Walsh) that the time has come for his family to leave their temporary residence in Alexandria — the only home 7-year-old Jesus (Adam Greaves-Neal) has ever known — and return to Nazareth. Not for the first time, Joseph and Mary (Sara Lazzaro) are being forced to grapple with the concrete implications of their son’s unique identity.

Together with Jesus’ other close relatives — including his uncle, Cleopas (Christian McKay), and cousin, James (Finn McLeod Ireland) — Joseph and Mary understand, at least partially, that the lad is the promised Messiah and the Son of God. The fact that he possesses miraculous powers is, moreover, becoming apparent even to people outside the family circle.

Joseph and Mary’s dilemma is obvious: How can they properly guide a child who remains, in many ways, a mystery to them? And how are they to answer the many questions he himself keeps raising? As Joseph pointedly asks, “How do we explain God to his own Son?”

In the midst of their bafflement, Joseph and Mary are confronted with an even more urgent priority: keeping Jesus safe from the dangers that surround him. The notoriety resulting from the boy’s superhuman abilities has drawn the attention of corrupt King Herod (Jonathan Bailey) who dispatches a Roman centurion named Severus (Sean Bean) to track and kill him.

Jesus is also being dogged by the figure of Satan (Rory Keenan), though only he can sense the evil adversary’s presence.

While “The Young Messiah” can be warmly endorsed for a wide range of audiences, the mature elements listed below, although discreetly handled, bar recommendation for all.

The film contains combat violence with slight gore, scenes of crucifixion, an attempted rape and at least one crass term. The Catholic News Service classification is A-II — adults and adolescents. The Motion Picture Association of America rating is PG-13 — parents strongly cautioned. Some material may be inappropriate for children under 13.