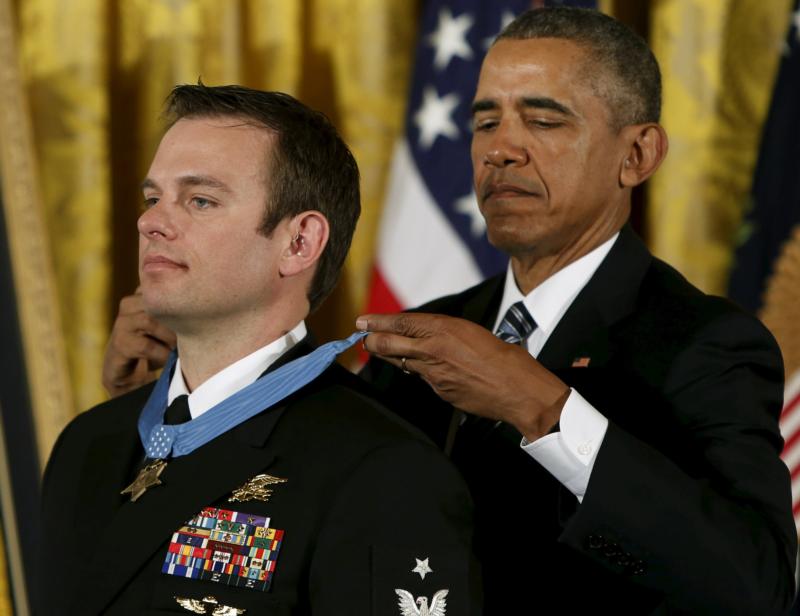 U.S. President Barack Obama awards the Medal of Honor to U.S. Navy Senior Chief Special Warfare Operator Edward Byers Jr. during a ceremony at the White House in Washington Feb. 29. Byers, a Catholic, was honored for his courageous actions while serving as part of a team that rescued an American civilian in 2012 who was held hostage in Afghanistan. (CNS photo/Gary Cameron, Reuters)

WASHINGTON (CNS) — A Catholic Navy SEAL with a strong devotion to St. Michael the Archangel was awarded the Medal of Honor by President Barack Obama at the White House Feb. 29.

At the White House ceremony, Obama introduced Byers, calling him a “special breed of warrior that so often serves in the shadows.”

“The ethos — the creed — that guides every Navy SEAL says this: ‘I do not advertise the nature of my work, nor seek recognition for my actions,'” the president said. “Which is another way of saying that standing here today, in front of the entire nation, is not Senior Chief Ed Byers’ idea of a good time.”

The nation’s highest military honor was awarded to Byers for, as a military aide read, “conspicuous gallantry and intrepidity at the risk of his life above and beyond the call of duty as a Hostage Rescue Force Team member in Afghanistan in support of Operation Enduring Freedom Dec. 8-9, 2012.”

The Washington Post and other news outlets reported that Byers, who is assigned to the SEAL teams based in Little Creek, Virginia, said that for years he has prayed to St. Michael the Archangel, drawing strength from the saint described in Scripture as the one who defends the people of God from their enemies.

Byers was quoted by the Post as saying that during a career of serving in combat, he has always worn a St. Michael the Archangel patch “on my back. … Every single mission I’ve ever done, I’ve always said a prayer to St. Michael to protect and watch over us.”

During the Medal of Honor presentation, a military aide described the heroism of Byers: “(He) fearlessly rushed into the room and engaged an enemy guard aiming an AK-47 at him. He then tackled another adult male who had darted toward the corner of the room. During the ensuing hand-to-hand struggle, Chief Byers confirmed the man was not the hostage and engaged him. As the other rescue team members called out to the hostage, Chief Byers heard a voice respond in English and raced toward it. He jumped atop the American hostage and shielded him from the high volume of fire within the small room.”

While he covered the hostage with his body, the aide continued, Byers “immobilized another guard with his bare hands, and restrained the guard until a teammate could eliminate him.

“His bold and decisive actions under fire saved the lives of the hostage and several of his teammates. By his undaunted courage, intrepid fighting spirit, and unwavering devotion to duty in the face of near-certain death, Chief Petty Officer Byers reflected great credit upon himself and upheld the highest traditions of the United States Naval Service.”

According to reports, Byers is the sixth Navy SEAL in history to be awarded the Medal of Honor and the first living SEAL to receive the honor since the Vietnam War.

Byers has demonstrated “true heroism” and his actions “will continue to inspire all of those who love our country and serve it so selflessly,” said Archbishop Timothy P. Broglio of the U.S. Archdiocese for the Military Services.

“It is obvious that his patriotism and prayer are motivated by his strong Catholic faith. May his story strengthen all of us in our conviction to do what is right and just. It is an honor to join the chorus of those who are praising this SEAL and all of his fellows,” the archbishop said in a March 2 statement.

Byers also has two Purple Hearts for wounds suffered in combat and five Bronze Stars with V device for heroism.

In Obama’s introduction of Byers’ family, he welcomed his wife, Madison, their daughter, Hannah, and Byers’ mother, Peggy. Obama relayed that she “had one question when Ed told her about this ceremony — ‘Do you think I can come?’ That’s so sweet. Yes, Mom, you’re allowed to come when your son gets the Medal of Honor,” Obama said.