Floods cause unprecedented damage to areas in New Orleans Archdiocese 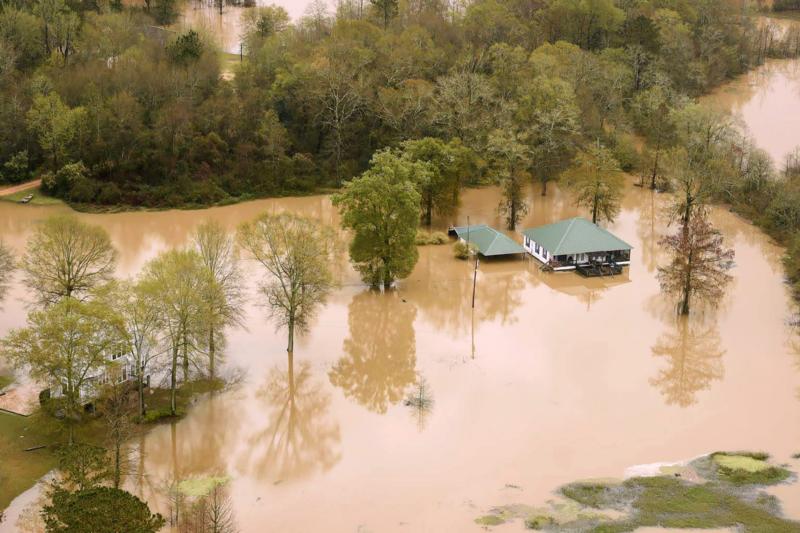 NEW ORLEANS (CNS) — For every sub-sea-level New Orleanian who lives precariously behind engineered levees, the north shore often is considered to be a safe haven from any storm.

But when the water from torrential rains and cresting rivers kept rising to historic levels March 11 north of Lake Pontchartrain, there was absolutely no way to dam the flow before it caused unprecedented damage to St. Joseph Abbey and Seminary College and several other areas in the northernmost parts of the Archdiocese of New Orleans.

If the great flood of 1927 was the benchmark for high water, the March 11 flood surpassed it by at least two inches, said Benedictine Abbot Justin Brown. The storm surge sent 2 feet to 2 and a half feet of water into every building on campus except for the elevated abbey church and St. Pius X Hall.

Making matters worse, because the abbey had not sustained any flood damage in nearly a century, the Benedictine monks long ago had forgone protecting their property with flood insurance.

“No, we didn’t have flood insurance,” Abbot Brown told the Clarion Herald, the archdiocesan newspaper. “It was something we had internally discussed. But the flood of 1983 was our last bad flood, and water did not get into buildings.”

The flood also sent about 4 feet of water into about a dozen buildings at nearby Camp Abbey, owned and operated by the Archdiocese of New Orleans on land that is part of St. Joseph Abbey.

The archdiocese does have flood insurance on every building at Camp Abbey, and it is working on remediation and restoration plans that will allow Camp Abbey’s summer camp to open as scheduled in June.

“We want to reassure parents that our summer camp looks like it will be on schedule and that everything that needs to be done will be done for the beginning of camp in June,” said Billy O’Regan, summer program coordinator for Camp Abbey. “But we also want folks to know that stepping forward and helping with donations will hasten our efforts at rebuilding. There will be areas that need to be rebuilt that won’t be covered by insurance.”

Other properties damaged in the flood were two buildings at Annunciation Elementary School in Bogalusa — one building had flood coverage and the other did not — and the Priests’ Villa in Covington, which took on 5 feet of water.

While St. Peter Parish in Covington had no damage to its buildings, the parish organized a massive outreach program to area residents, matching volunteers to those who had specific needs. About 125 volunteers were mobilized to help at least 12 families, Father Otis Young said.

“Electronic media came into play and was so helpful,” said Father Young. “Father Peter (Finney III, parochial vicar) set it up. We were able to match up people who needed help with those who volunteered to help.”

Rebuilding the monastery and seminary college will be a monumental undertaking. About 2 feet of water seeped into every building, including the gift shop, library, classrooms, cafeteria and woodworks, where the monks and community volunteers work side by side to make hand-crafted caskets.

“All you can do is laugh and go with the flow,” said Deacon Mark Coudrain, who runs the casket-making operation. “I was able to get some of the caskets and some of the lighter things up higher, but most of the heavy equipment was down and flooded. We got 20 inches in here.”

Deacon Coudrain said by the time he called a few volunteers to see if they could help him move the equipment higher, it was too late.

“When I started calling, we had no water in the building,” he said. “Thirty minutes later, it was inside.”

The deacon said March 14 there were 20 volunteers going through the woodworks building and cleaning up what they could. “Those guys have experience with this, and they’re taking the ball and running with it,” he said. “They’re working on getting us up in two weeks.”

Classes were canceled for the week for the seminary’s 138 seminarians — the largest enrollment in recent history — and were scheduled to resume March 21. The recently refurbished Vianney Hall dormitory sustained damage to about 20 ground-floor rooms.

“It’s going to be a challenge to house them, but we will,” Abbot Brown said. Several elderly or infirm monks were taken from their ground-floor rooms in the monastery to accommodations at St. Benedict Parish rectory and the Carmelite Sisters’ motherhouse nearby.

The only building not touched at all by water was St. Pius X Hall, which is elevated; it houses the seminary’s administrative and business offices. No water got into the church, but the electrical systems were all located in the basement. The church has been closed to the public until further notice.

“For us — and for all people who have been affected right now — we put our hope and trust in our God of providence and care, who will help us get through,” Abbot Brown said. “We are so thankful and blessed for the prayers and support of so many people. As we do our own cleanup and recovery, we’re also aware that many others are in an even worse situation in their homes. We’re praying for them.

“The Benedictine monks have been around for 1,500 years as an order. We have learned to stand firm and keep the faith.”