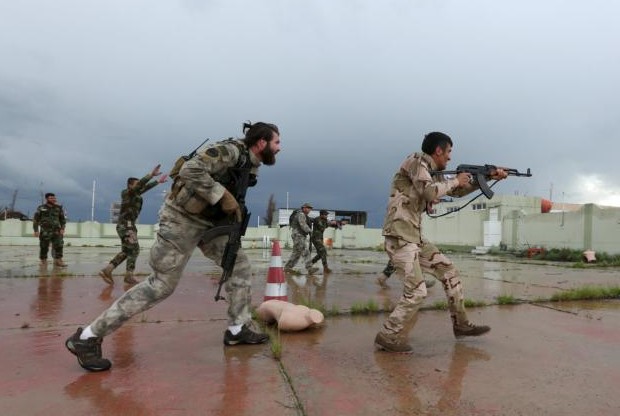 Christians volunteers who have joined Kurdish Peshmerga fighters take part in a training session by coalition forces in Duhok, Iraq, March 16. Five years after the war in Syria began, there is a "feeling of helplessness in front of an endless human tragedy," a Vatican official told the U.N. Human Rights Council. (CNS photo/Ari Jalal, Reuters)

VATICAN CITY (CNS) — Five years after the war in Syria began, there is a “feeling of helplessness in front of an endless human tragedy,” a Vatican official told the U.N. Human Rights Council.

A “continuation of the conflict and its procession of refugees, disrespect of human rights and international humanitarian law” add to the despair, said Msgr. Richard Gyhra, charge d’affaires at the Vatican’s observer mission to U.N. agencies in Geneva.

“Crimes against humanity are frequent and unpunished; intentional attacks against the civilian population are daily,” he told the Human Rights Council March 15. The council met in Geneva and his office released the text of his speech.

The Syrian peace talks, which resumed in Geneva March 14, “should push all people of goodwill not to give up in the search to minimize this human, humanitarian and political tragedy, and, above all, to continue to work toward a peaceful and negotiated solution that takes into account the best interests of Syria and all components of the Syrian nation,” the monsignor said.

Of those who have fled their homes, more than 5 million are refugees now living outside Syria, Paulo Sergio Pinheiro, chair of the Independent International Commission of Inquiry on the Syrian Arab Republic, told the Human Rights Council.

Msgr. Gyhra repeated Pope Francis’ statement Feb 28 in which he pledged the Vatican’s “support to regional and international efforts underway to consolidate the recently negotiated cease-fire accepted by the majority of parties in the conflict.”

In the peace talks, Msgr. Gyhra said, the Vatican insists on the importance of looking at the long-term effects and interests of the region’s countries. “Any policy that ignores the true interest of Syria will be counterproductive,” he said, and will ultimately have “serious consequences for the region and the world.”

He also repeated the Vatican’s insistence that “it is urgent to begin immediately the delivery of humanitarian assistance to the population in need and to remove all obstacles so that humanitarian organizations can have access to all areas.”