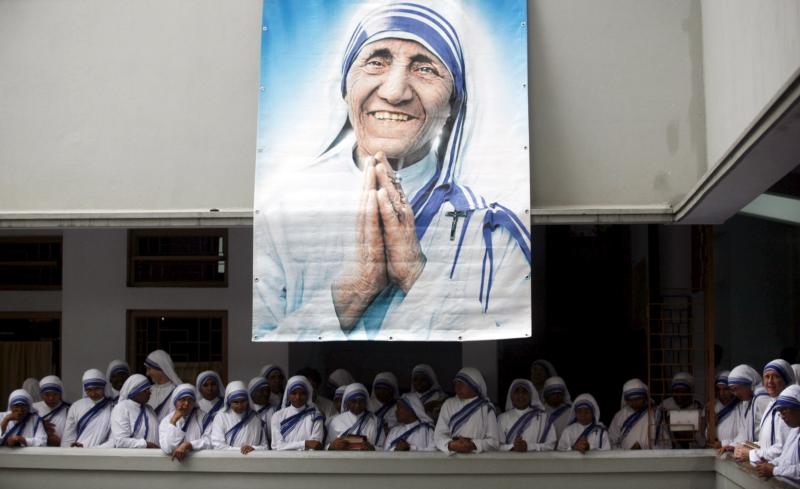 A poster of Blessed Teresa of Kolkata and Missionaries of Charity are seen in Kolkata, India, in this Sept. 5, 2007, file photo. Pope Francis will declare her a saint at the Vatican Sept. 4, the conclusion of the Year of Mercy jubilee for those engaged in works of mercy. (CNS photo/Jayanta Shaw, Reuters)

The date was announced March 15 during an “ordinary public consistory,” a meeting of the pope, cardinals and promoters of sainthood causes that formally ends the sainthood process.

At the same consistory, the pope set June 5 as the date for the canonizations of Blessed Stanislaus Papczynski of Poland, founder of the Marian Fathers of the Immaculate Conception, and Blessed Mary Elizabeth Hesselblad of Sweden, who re-founded the Bridgettine sisters.

In addition, Pope Francis declared that Oct. 16 he would celebrate Mass for the canonizations of Argentina’s “gaucho priest,” Blessed Jose Brochero, and Blessed Jose Sanchez del Rio, a 14-year-old Mexican boy martyred for refusing to renounce his faith during the Cristero War of the 1920s.

Setting the dates concludes a long process of studying the lives and writings of the sainthood candidates:

— Mother Teresa was widely known as a living saint as she ministered to the sick and the dying in some of the poorest neighborhoods in the world. Although some people criticized her for not also challenging the injustices that kept so many people so poor and abandoned, her simple service touched the hearts of millions of people of all faiths.

Born to an ethnic Albanian family in Skopje, in what is now part of Macedonia, she went to India in 1929 as a Sister of Loreto and became an Indian citizen in 1947. She founded the Missionaries of Charity in 1950.

Shortly after she died in 1997, St. John Paul II waived the usual five-year waiting period and allowed the opening of the process to declare her sainthood. She was beatified in 2003.

After her beatification, Missionary of Charity Father Brian Kolodiejchuk, the postulator of her sainthood cause, published a book of her letters, “Mother Teresa: Come Be My Light.” The letters illustrated how, for decades, she experienced what is described as a “dark night of the soul” in Christian spirituality; she felt that God had abandoned her. While the letters shocked some people, others saw them as proof of her steadfast faith in God, which was not based on feelings or signs that he was with her.

The date chosen for her canonization is the eve of the 19th anniversary of her death and the date previously established at the Vatican for the conclusion of the Year of Mercy pilgrimage of people like her who are engaged in works of mercy.

— Blessed Papczynski founded the Marian Fathers of the Immaculate Conception in Poland in the 17th century. Today the Marians are special promoters of the Divine Mercy devotion of St. Faustina Kowalska.

Born in 1631, he was ordained as a Piarist priest, but left the order after 10 years. His new congregation was established officially in 1679 and he died in 1701. He was beatified in Poland in 2007.

— Blessed Hesselblad was born in Faglavik, Sweden, in 1870 and went to the United States at the age of 18 in search of work to help support her family. She studied nursing in New York and, impressed by the faith of the Catholics she cared for, began the process of entering the Catholic Church. Coming from a Lutheran family, she was conditionally baptized by a Jesuit priest in Washington, D.C. On a pilgrimage to Rome, she visited the home of the 14th-century St. Brigid of Sweden and was welcomed by the Carmelite sisters who were then living there.

She received permission from the pope to make religious vows under the rule of St. Brigid and re-found the Bridgettine order that had died out in Sweden after the Protestant Reformation. She was beatified in 2000.

— Blessed Brochero, the “gaucho priest,” was born in Argentina in 1840 and died in 1914. Ordained for the Archdiocese of Cordoba, he spent years traveling far and wide by mule to reach his flock. Pope Francis, in a message in 2013 for the priest’s beatification — a ceremony scheduled before the Argentine pope was elected — said Father Brochero truly had “the smell of his sheep.”

He gained particular fame for his work caring for the sick and dying during a cholera epidemic in 1867. With his own hands, he built churches and chapels and opened paths through the western mountains of Cordoba province. During his travels, he contracted Hansen’s disease, more commonly known as leprosy; many people believe he was infected by sharing a cup of mate, an herbal tea, with someone who already had the disease.

— Blessed Sanchez was martyred in Mexico in 1928, just weeks before his 15th birthday. In 1926 Mexican President Plutarco Elias Calles had introduced tough anti-clerical laws and confiscated church property across the country. Some 90,000 people were killed in the ensuing Cristero war before the government and church reached an accord in 1929.

Young Sanchez wanted to fight in the war alongside his brothers, but he was too young. Eventually, he was allowed to be the flag bearer of a unit. During an intense battle, he was captured by government troops, who ordered him to renounce his faith. He refused, even when tortured. The boy was executed about two weeks later. He was beatified in 2005.