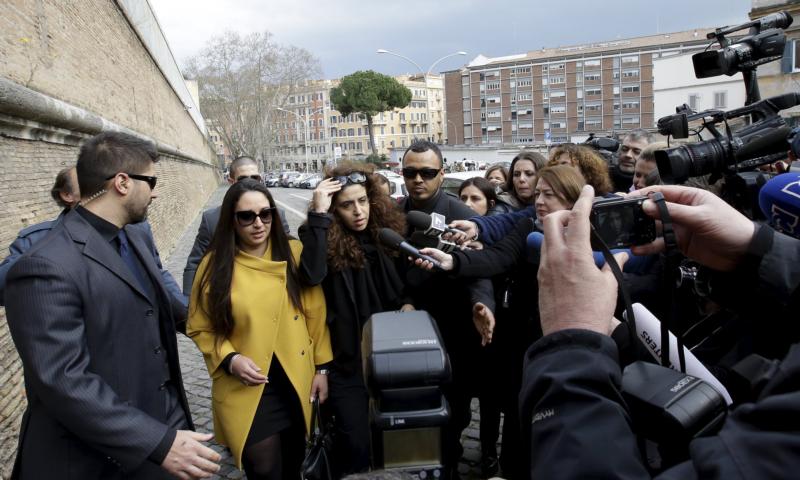 Italian laywoman Francesca Chaouqui, center, and her lawyer Laura Sgro, second from left, arrive for the so-called "Vatileaks" trial at the Vatican March 14. Chaouqui is one of five people on trial for leaking confidential Vatican documents that were published in two books. (CNS photo/Alessandro Bianchi, Reuters)

VATICAN CITY (CNS) — A Spanish monsignor accused of leaking confidential Vatican documents admitted in a Vatican court that he passed along confidential information to Italian journalists.

Spanish Msgr. Lucio Angel Vallejo Balda, secretary of the Prefecture for the Economic Affairs of the Holy See, testified he passed along several documents to Gianluigi Nuzzi, author of “Merchants in the Temple,” and Emiliano Fittipaldi, author of “Avarice.” He also admitted to giving Nuzzi five pages containing passwords to private emails and password-protected documents.

The so-called “VatiLeaks” trial resumed in a Vatican courtroom March 14 after a three-month delay to allow defense lawyers time to prepare their case.

Along with Msgr. Vallejo Balda and the Italian journalists, the accused are: Francesca Chaouqui, a member of the former Pontifical Commission for Reference on the Organization of the Economic-Administrative Structure of the Holy See; and Nicola Maio, who served as personal assistant to Msgr. Vallejo Balda when he worked on the commission.

Although the Vatican prosecution’s case asserts that Nuzzi and Fittipaldi illegally obtained the confidential documents, both journalists defended their right to freedom of the press.

Jesuit Father Federico Lombardi, Vatican spokesman, told journalists March 12 that Msgr. Vallejo Balda, was remanded back to a Vatican jail cell after it was discovered he violated the terms of his house arrest by communicating with the outside world.

Although not specifying his reasons for passing the documents to the journalists, the Spanish monsignor testified he became more doubtful of Chaouqui’s character, saying she told him she was “the number two in the Italian secret service” and that he suspected she had ties with the Mafia.

He also claimed that Corrado Lanino, Chaouqui’s husband and the IT technician for the commission, pressured him to find a job for Chaouqui given that her term at the pontifical commission was ending.

All this, he testified, “gave me the moral certainty that there were illegitimate things behind Chaouqui.”

The monsignor testified that he was afraid of Chaouqui, although he did not explain what that had to do with him giving documents to Fittipaldi and Nuzzi.

Father Lombardi told reporters Msgr. Vallejo Balda would continue testifying March 15 and that the trial would most likely continue even after Easter.

NEXT: It’s official: Mother Teresa to be canonized Sept. 4