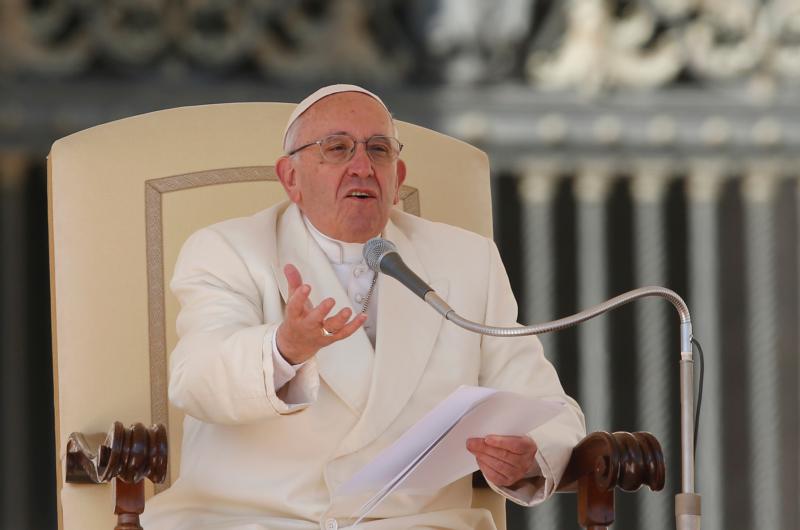 VATICAN CITY (CNS) — Speaking out against exploitation and unfair wages for workers, Pope Francis told benefactors to forget about donating money to the church if their earnings came from mistreating others.

“Please, take your check back and burn it,” he said to applause.

“The people of God — that is, the church — don’t need dirty money. They need hearts that are open to God’s mercy,” the pope said March 2 during his general audience in St. Peter’s Square.

God wants people to turn away from evil and do what is just, not cover up their sins with gestures of sacrifice, he said.

Just as God derives no pleasure from “the blood of bulls and lambs” slaughtered in his name, he is especially averse to offerings from hands dirty with the blood of another human being.

“I think of some church benefactors who come with an offering,” he said, and sometimes that offering is “fruit of the blood of many people, who are exploited, mistreated, enslaved by poorly paid work.”

The pope said he would tell these donors to go away because God wants sinners “with purified hands” who have changed course, avoid evil and work for what is good and just, like aiding the oppressed and defending the weak.

“I am thinking of many, many refugees who are landing in Europe and don’t know where to go,” he said.

At his general audience, the pope continued a series of talks dedicated to the Year of Mercy by focusing on how God is able to unconditionally love, beseech and correct his sinning children.

Just like the father of a family, God cares for his people by teaching them, guiding them to freely choose the good and help others, and correcting them when they make a mistake.

The prophet Isaiah presents God as an “affectionate, but also an alert and strict father,” the pope said.

God points out the infidelity and corruption of his people, and shows his bitterness and disappointment in order to help them recognize their sin and “bring them back to the path of justice,” he said.

“Even though he is hurt, God lets love do the talking and he appeals to the conscience of these degenerate children so they mend their ways and let themselves be loved again,” the pope said.

One role parents have is to help their children use their freedom responsibly, but it is human sin which causes people to see freedom as a “pretense for autonomy, for pride,” and pride leads to conflict and “the illusion of self-sufficiency.”

People belong to God as his children, and as such, should live in loving, trusting obedience, recognizing that “everything is a gift that comes from the father’s love,” he said.

“The consequence of sin, he said, is a state of suffering,” which also serves to help people become accountable and face “the desolate emptiness” of choosing death over life.

“Suffering — the inevitable consequence of a self-destructive decision — must make the sinner reflect in order to open him or her up to conversion and forgiveness,” Pope Francis said.

For the God of mercy and love, “punishment becomes an instrument to stimulate reflection,” he said. God “always leaves the door of hope open,” patiently waiting for the moment the sinner is ready to listen and convert.

The road to salvation, therefore, isn’t ritual sacrifice, it is doing what is right and just in the eyes of God, he said.

Ritual sacrifice is condemned because, “instead of showing conversion, it claims to replace it,” he said, “creating the deceptive belief that sacrifices are what save, not the divine mercy that forgives sins.”

Just as people go see the doctor when they are ill, people who are afflicted with the debilitating effects of sin should turn to God — not a “witch doctor” or other false and mistaken paths. Only God offers true healing.

No matter what people have done, God never disowns or turns anyone away, he said. Even “the evilest person” in the world will always be one of his children, the pope said.

“He will always say, ‘Child, come.’ And this is our father’s love and this is God’s mercy. Having a father like this gives us hope and faith,” he said.

Freely and forever, God will always turn the gravest of sins, “white as snow,” the pope said. “This is the miracle of God’s love.”