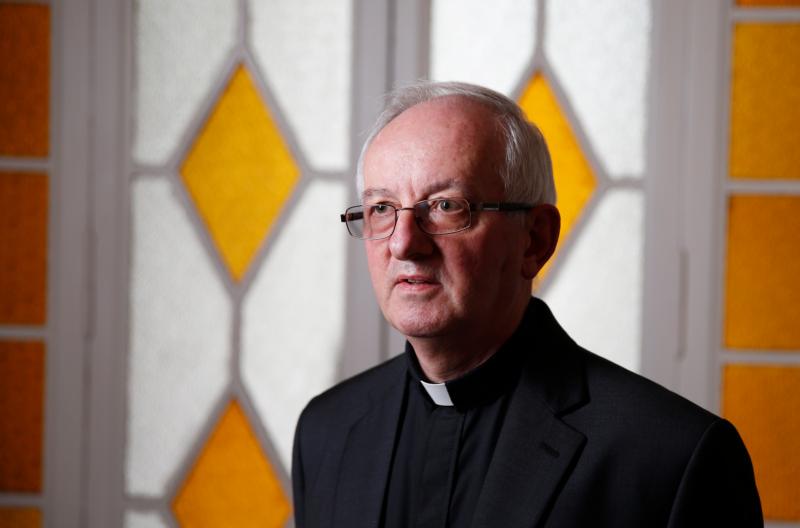 Father John Fogarty, superior general of the Congregation of the Holy Spirit, is pictured at the order's headquarters in Rome April 20. Father Fogarty said drawing up guidelines for the congregation to prevent sexual abuse "was the first priority" after he became superior in 2012. (CNS photo/Paul Haring)

VATICAN CITY (CNS) — In a continuing effort to protect children, the Catholic Church’s focus is now turning to religious orders of men and women.

Much of the attention had been on how dioceses and national bishops’ conferences have been responding to victims and protecting children.

But religious orders and congregations are sometimes left out of that picture, even though they, too, have a duty to make sure every person in their care is safe. Also, the majority of the more than 300,000 Catholic schools and orphanages around the world are run by religious brothers and sisters whose charisms are to promote human dignity and Gospel values.

Pope Francis last year authorized the Congregation for the Doctrine of the Faith to investigate and judge claims of “abuse of office” by bishops who allegedly failed to protect minors and vulnerable adults from sex abuse. But that form of censure “wasn’t extended to superior generals, and it should be,” said Father John Fogarty, superior general of the Congregation of the Holy Spirit.

Canon Law and the complementary Vatican norms regarding this field “refer only to clergy” — bishops, priests and deacons — said Jesuit Father Hans Zollner, president of the Center for Child Protection at Rome’s Pontifical Gregorian University.

While the Vatican’s doctrinal congregation asked the bishops’ conferences to develop guidelines and procedures on how they are adhered to by local bishops, he said religious brothers, religious seminarians before ordination or religious sisters are in a league of their own, and the canonical practice is different.

Each religious order or congregation establishes its own policies, he said. And while some may have a set of guidelines for their whole congregation, in others each province or region is in charge of setting up safeguarding guidelines, Father Zollner told Catholic News Service.

Father Fogarty said his “first priority” after being elected superior of the Spiritans in 2012 was to establish comprehensive guidelines and then ask each of the order’s provinces and regions to draw up procedures that would protect children and respect local laws and customs.

“Not everyone is at the same point on the learning curve,” he said. But his experience working for the province in Ireland and as provincial superior in the United States “was very helpful for me for formulating policy,” said the Dublin-born missionary. He was surrounded by “lots of accumulated wisdom, lots of workshops, all the latest insights and reports,” he said.

Since each local superior of his order is responsible for his territory, Father Fogarty said he uses his role “to work with the superiors” and get them all “on the same wavelength.”

Not everyone in every part of the world is “at the same point” in recognizing the need to protect and care for children and survivors; “our job is to get them there, put pressure on them to produce adequate policies, procedures, hold workshops” and use every “means at our disposal” to spread awareness and resources. When new superiors meet in Rome each year, one session is dedicated to safeguarding norms, Father Fogarty said.

When leaders don’t draw up procedures or get informed, he said, “we can urge them” to, “but we can’t do it in their place. We can’t replace (the local superior).”

The need to have adequate protection policies and procedures in place for religious orders is urgent since they are present in so many countries around the globe, said Mark Vincent Healy, an advocate in Ireland for services and care for survivors of child sexual abuse.

For example, of the 48 Spiritan priests noted in Ireland’s National Board for Safeguarding Children’s audit in 2012 as accused of abuse in Ireland, half of them had also served in other countries, including the United States, Canada, Sierra Leone and Kenya, Healy has said.

In Healy’s situation, the Spiritan priest who abused him at the school the order ran in Ireland was transferred to a Spiritan-run school in Sierra Leone, where he allegedly abused again before being convicted in Ireland and laicized.

Healy’s case was handled in Ireland — the country where the abuse occurred — but, he said, victims of Irish missionaries in other countries, particularly Africa, lack clear or any channels at all for reporting and redress.

The church already responds to the psychological, emotional and spiritual fall out of victims of war in many of those countries, Healy said, so why not extend that same care and concern to victims of abuse by its own members.

Healy said he was looking at ways the order and the church as a whole could provide services across jurisdictions, especially “in countries where there are no structures” to help survivors and communities.

One proposal, which he also discussed with Father Fogarty, was the creation of a global network modeled after Doctors Without Borders. Instead of addressing physical harm, the network could specialize in delivering mental health care services to people suffering from trauma caused by war, civil conflicts and abuse in underdeveloped nations.

By offering comprehensive mental health services, perhaps “you can alleviate the suffering and bring some function back to a dysfunctional society. Otherwise, violence will just repeat itself,” Healy said.

Father Zollner said that in some places in Asia and parts of Africa, the Catholic Church “is the organization that is doing more to safeguard minors than other groups.”

In some areas, he said, “if you didn’t have the church, you would have nothing there” to look after and care for the most vulnerable.

One example, he said, is Bishop Emanuel Barbara of Malindi, Kenya. The bishop, who’s a Capuchin priest from Malta, “set up the first help desk in the whole country” for victims of the sex-tourism industry there. “All the others, including those who legitimately have the power, just look away from the problem, there is much money involved,” Father Zollner said.

With one in five children in Europe expected to be victims of some form of abuse, according to the Council of Europe, and global estimates reporting 40 million children are subjected to abuse each year, many child protection advocates want to see more action and cooperation among all sectors of society.

“If the Catholic Church can address it, then the larger human family can, too,” Healy said. The church can’t keep being seen as sole perpetrator and healer “because that’s not working.”

NEXT: Church is no longer ‘church of the poor,’ says Indian theologian nun