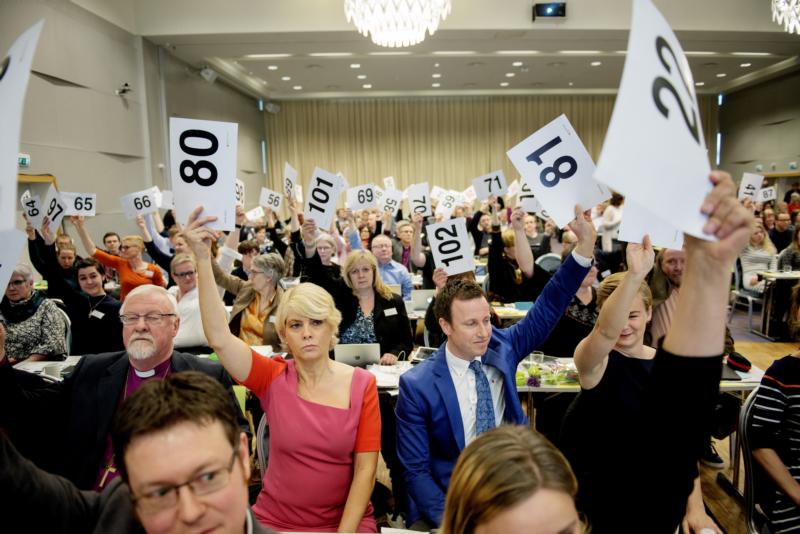 Church leaders and other officials vote April 11 on gay marriage within the Norwegian Church in Trondheim, Norway. A Norwegian bishop said the country's clergy will no longer officiate at civil weddings, after the predominant Lutheran Church's governing synod voted to conduct gay marriages in Norway. (CNS photo/Ole Martin Wold, EPA)

Bishop Bernt Eidsvig of Oslo told Catholic News Service that he would have to seek permission from the Vatican, but added, “It’s clear we must distinguish our own church marriages from others.”

“This is a matter of liturgy, so it doesn’t necessarily reflect broader change in our society’s moral values. But politicians may now get aggressive toward churches who resist these weddings, so the best option is for us to stop conducting marriages on the state’s behalf.”

He said Norwegian Catholics “hope to maintain good relations with the Lutheran Church,” but said they would “make it clear we don’t understand their decision and hope they’ll still reconsider it.”

Bishop Eidsvig told CNS April 21 that many Norwegians remained strongly opposed to same-sex marriage, which has been legal since 2009. He said Lutheran churches in Africa, Asia and Latin America had also “strongly condemned” the synod decision.

“My own reaction is one of sorrow and disappointment, and we can’t foresee the longer-term consequences for interchurch contacts here,” Bishop Eidsvig said.

Bishop Eidsvig and three Protestant Norwegian leaders sent a statement to Norway’s Vart Land daily, saying same-sex marriage violated “not only the Christian understanding of marriage, but also the historic and universal view of marriage.” The statement said the introduction of separate civil and religious ceremonies would protect other churches from “increased pressure to consecrate same-sex couples.”

Catholics make up a small minority of the 5.2 million inhabitants of Norway.

Pope Francis will visit Lund, Sweden, Oct. 31 for an ecumenical service with Lutheran World Federation members to mark the 500th anniversary of the Protestant Reformation.

Bishop Eidsvig told CNS it was unlikely the same-sex marriage controversy would be mentioned during the one-day event, adding that he hoped the pope would also include a meeting with Catholics.