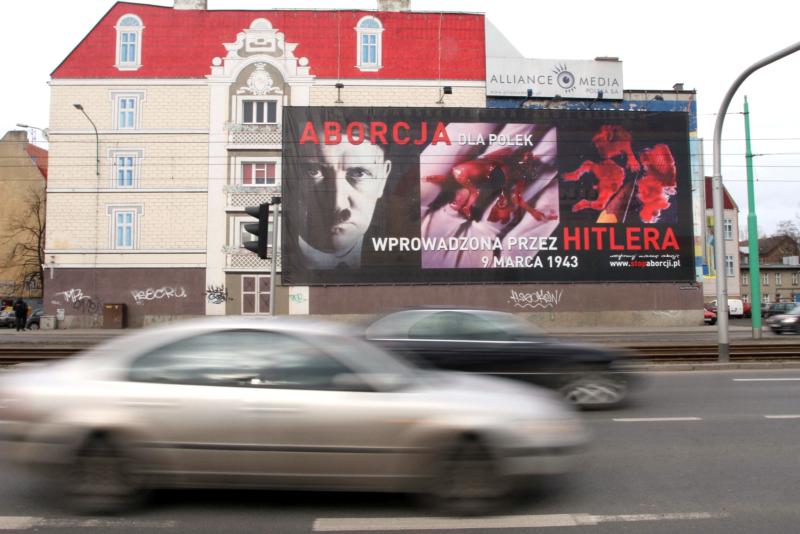 A pro-life poster is seen in 2010 on a billboard in Poznan, Poland. Poland's Catholic bishops have called for a permanent ban on abortions to mark the anniversary of their country's Christian conversion in A.D. 966. (CNS photo/Adam Ciereszko, EPA)

WARSAW, Poland (CNS) — Poland’s Catholic bishops have called for a permanent ban on abortions to mark the anniversary of their country’s Christian conversion in A.D. 966.

“Each person’s life is protected by the Fifth Commandment, do not kill. So the attitude of Catholics is clear and unchanging,” the bishops’ conference said in a March 30 statement.

“In this jubilee year of Poland’s baptism, we urge all people of goodwill, believers and nonbelievers, to take action to ensure full legal protection of unborn lives,” asking members of parliament to take the legislative initiative.

The statement, to be read in churches April 3, said Poland’s 1993 law, which restricts abortions to cases of rape, incest, severe fetal damage or threats to a woman’s life, could not be sustained and should be replaced by a total ban. It urges politicians to support the proposed ban, while setting up “programs to ensure concrete help for parents of sick and handicapped children and those conceived through rape.”

Polish Prime Minister Beata Szydlo told Polish Radio March 31 that the statement “has clearly pointed us in the right direction. … Each of us must now decide according to conscience. But it will certainly be bad if such a sensitive, important issue becomes the object of a political struggle.”

Polish church leaders have previously threatened to deny sacraments to politicians supporting liberalization of the 1993 law, which has cut annual legal abortions to around 200 nationwide. Last September, the Polish parliament rejected a church-backed civil initiative to introduce a complete ban on abortion.

However, Polish newspapers predicted a new draft law, introduced March 14, could now be enacted in the 460-seat Sejm lower house, where the pro-church Law and Justice Party has held a majority since winning October elections. The proposal would outlaw abortions except to save a mother’s life.

Speaking at a March 30 Sejm pro-life conference, Archbishop Henryk Hoser of Warsaw, who heads the Polish church’s bioethics commission, said “every human life, regardless of usefulness and serviceability” should be legally protected, adding that a growing disregard for life had “degraded medicine and social life.”

Celebrations are currently underway to mark the 1,050th anniversary of the baptism of Poland’s first Christian king, Mieszko I. The country will also host a July 27-31 visit by the pope as part of the 14th international celebration of World Youth Day in Krakow.

NEXT: Pope calls for new Catholic institutions of mercy and charity