On response to ISIS genocide, advocates ask: ‘Where are you, world?’ 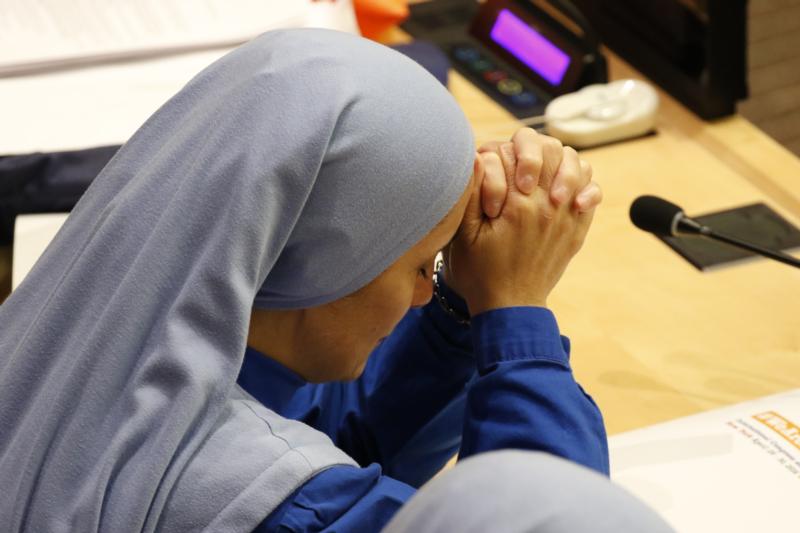 Iraqi-born Mother Olga of the Sacred Heart, founder of the Daughters of Mary of Nazareth, bows her head during a conference addressing the persecution of Christians and other minorities in the Middle East and Africa at the United Nations April 28. (CNS photo/Gregory A. Shemitz)

UNITED NATIONS (CNS) — While religious freedom in much of the Middle East is under siege and the civil war in Syria seems to have no end in sight, Carl Anderson, CEO of the Knights of Columbus, and others called the United Nations to action.

The U.N. plays a crucial role in securing the future of the region, particularly for people being tortured, kidnapped and killed because of their religious beliefs, Anderson said during a daylong conference April 28.

Anderson’s presentation came during one of three panel discussions at the conference sponsored by the office of the Vatican’s permanent observer to the U.N. and joined by In Defense of Christians and other organizations focusing on human rights abuses in the Middle East.

Presenters included people who experienced or witnessed atrocities being committed against religious minorities.

Led by remarks from Archbishop Bernardito Auza, the Vatican’s permanent observer to the U.N., the event had an intensely sensitive agenda.

A 278-page report submitted to U.S. Secretary of State John Kerry that was co-authored by the Knights of Columbus and the group In Defense of Christians in March outlined what it called “genocide” being carried out against religious minorities by the Islamic State. Its contents focused largely on Christians who have been murdered and those indigenous communities who will or have been displaced from their region.

On March 17, Kerry designated Islamic State actions as genocide, but the United States has yet to offer a plan to respond.

The U.N. estimates that more than half of Syria’s pre-civil war population of about 22.1 million people are in urgent need of humanitarian assistance. Four million Syrian refugees now live outside of their homeland. Overall, at least 8 million people have been displaced throughout the region, human rights organizations estimate.

Anderson mentioned published threats in the Islamic State’s magazine, Dabiq, specifying what the group has called the “Crusader army” from the West. Such threats have not only been carried out in many parts of the Middle East but have haunted the lives of innocent men, women and children, he said.

The Knights of Columbus has raised more than $10.5 million for relief since 2014 while partnering with dioceses and religious organizations to provide victims with food, clothing, shelter, education and medical attention, he said.

Anderson concluded his presentation by proposing that the U.N. take legal action against the Islamic State and other terrorist groups to prevent the eradication of long-standing and indigenous communities in the Middle East. He called for punishment of the perpetrators and for the establishment of international standards of justice, equality, the rule of law and religious freedom.

Sister Maria de Guadalupe Rodrigo, a member of the Congregation of the Incarnate Word who has spent 18 years in the Middle East as a missionary, spoke of her experienced living in Aleppo, Syria, a major battleground in the civil war.

“I remember the first two months when this all started, we all remained inside,” she said. “There were constant explosions and gunshots. We couldn’t sleep. But these weeks turned into months and the months into years.”

Sister Maria de Guadalupe described how children playing on the street collect bullets and trade them with one another because they could find nothing else to play with. Children should not be concerned about safety, but safety is all they think about, she said.

A child captured and tortured by ISIS also addressed the conference. Samia Sleman, 15, of Hardan, Iraq, a village north of Mount Sinjar, gave an emotional speech about her time in captivity. A member of the Yazidi minority, Sleman spent six months sequestered along with other girls who were starved, raped and sold to other Islamic State members.

Sleman brought attention to the many girls whom Islamic State members take as sex slaves while their mothers are killed for being “too old.” Some enslaved girls are as young 7 or 8 years old, she said.

Despite the horrific actions of her captors, Sleman, whose family is still being held, spoke on their behalf so the U.N. and world governments would act to end the genocide taking place.

In another session, Jacqueline Isaac, vice president of Roads of Success, a Southern California organization addressing human rights in the Middle East, asked, “Where are you, world?”

Victims of ISIS are more than numbers, but human beings, she said, as many in the audience rose to their feet and applauded.