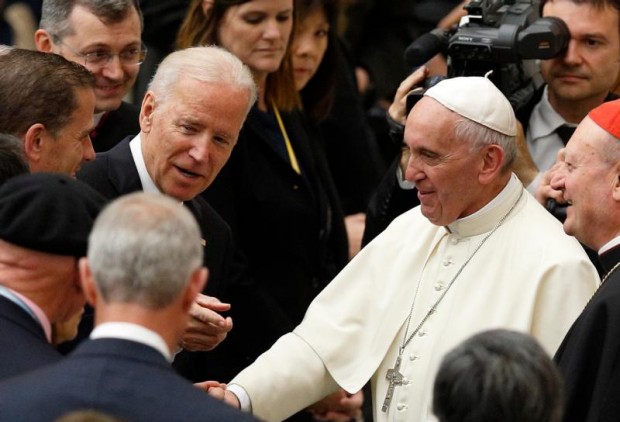 U.S. Vice President Joe Biden gestures as he meets Pope Francis after both leaders spoke at a conference on adult stem cell research at the Vatican April 29. (CNS photo/Paul Haring)

VATICAN CITY (CNS) — Moral and ethical concerns must guide medical research so it will always be at the service of protecting human life and dignity, Pope Francis said.

In that way, education and research can strive “to serve higher values, such as solidarity, generosity, magnanimity, sharing of knowledge, respect for human life, and fraternal and selfless love,” he said April 29, during an audience with people taking part in a conference on adult stem cell research.

“Research, whether in academia or industry,” he said, “requires unwavering attention to moral issues if it is to be an instrument which safeguards human life and the dignity of the person.”

U.S. Vice President Joe Biden was in attendance and had addressed the conference with a 29-minute speech on the need to invest in prevention, access and affordability in the fight against cancer.

The conference looked at current and experimental techniques in using adult stem cells to fight disease, specifically rare illnesses afflicting children. The April 28-30 conference was sponsored by the Pontifical Council for Culture; its foundation, STOQ, which is an acronym for Science, Theology and the Ontological Quest; and the Stem for Life Foundation, a nonprofit offshoot of the for-profit Caladrius cell-therapy company.

Speaking to participants gathered in the Vatican’s Paul VI hall, the pope highlighted the conference’s emphasis on top-notch medical know-how without overlooking the “ethical, anthropological, social and cultural questions, as well as the complex problem of access to care for those afflicted by rare conditions.”

People struck by rare diseases “are often not given sufficient attention because investing in them is not expected to produce substantial economic returns,” the pope said.

In fact, the pope repeated his call against “an economy of exclusion and inequality that victimizes people when the mechanism of profit prevails over the value of human life.”

“We know that we cannot always find fast cures to complex illnesses, but we can be prompt in caring for these people, who often feel abandoned and ignored,” he said. People must be sensitive to everyone regardless of their religious beliefs, social standing or cultural background, he said.

In his speech, delivered before the pope arrived, Biden spoke about the attention and comfort he felt when the pope met him and his family privately during the papal visit to the United States in September.

Biden lost his 46-year-old son, Beau, to brain cancer in May 2015. The vice president said that during the private meeting in an airplane hangar in Philadelphia, the pope’s words, prayers and presence “provided us with more comfort than even he, I think, will ever understand.”

Biden, a Catholic, said his family, like many others around the world, have seen “how faith can turn loss into hope, and hope into action.”

“The Holy Father has given hope to so many people, of all faiths, in every part of the world, with his strong words and humble ways,” he said.

Biden spoke about the U.S. administration’s “Moonshot,” an initiative he leads and which is aimed at eliminating cancer through prevention — including from environmental causes — and greater access to healthcare and affordable treatment. “The best medicine and treatment can’t belong only to the privileged and the powerful. It has to belong to everyone,” he said.

“Cancer is a constant emergency” Biden said, as it causes the deaths of 3,000 people a day in the United States.

He urged researchers and scientists to share and publish data and discoveries “immediately,” and not hide it for years behind “paywalls.”

“Why do you wait? What is your rationale?” he said.

Faith, in all religions, is animated by hope and love, he said, adding that he had faith global progress was possible. 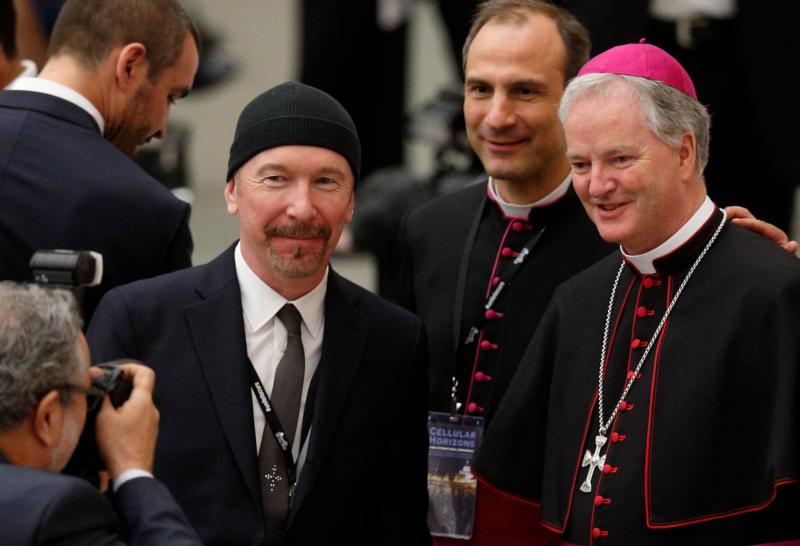 U2 guitarist David Evans, also known by his stage name The Edge, poses with Msgr. Melchor Jose Sanchez de Toca y Alameda, under secretary of the Pontifical Council for Culture, and Irish Bishop Paul Tighe, adjunct secretary of the same council, during a conference on adult stem cell research at the Vatican April 29. (CNS photo/Paul Haring)

NEXT: On response to ISIS genocide, advocates ask: ‘Where are you, world?’