Pope calls for new Catholic institutions of mercy and charity 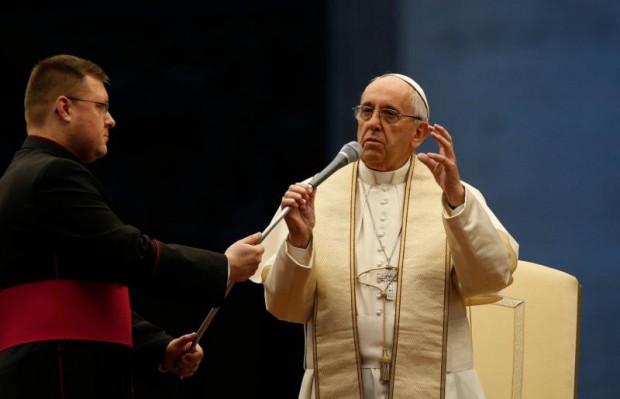 Pope Francis speaks as he leads a prayer service on the eve of the feast of Divine Mercy in St. Peter's Square at the Vatican April 2. (CNS photo/Paul Haring)

VATICAN CITY (CNS) — Pope Francis asked Catholic dioceses around the world to set up a permanent memorial of the Year of Mercy by establishing a hospital, home for the aged or school in an under-served area.

Celebrating Divine Mercy Sunday with an evening prayer vigil April 2 and a morning Mass April 3, the pope said the idea came to him during a meeting with a charitable organization and he decided to mention it at the vigil with participants of the European gathering of the World Apostolic Congress of Mercy and followers of the Divine Mercy devotion.

“As a reminder, a ‘monument’ let’s say, to this Year of Mercy, how beautiful it would be if in every diocese there were a structural work of mercy: a hospital, a home for the aged or abandoned children, a school where there isn’t one, a home for recovering drug addicts — so many things could be done,” the pope said.

“Let’s think about it and speak with the bishops,” the pope told thousands of people gathered in St. Peter’s Square to pray the Divine Mercy chaplet of St. Faustina Kowalska, and also to remember St. John Paul II, who promoted the devotion and died April 2, 2005.

Reciting the “Regina Coeli” prayer at the end of Mass the next day, Pope Francis said the Divine Mercy Sunday celebration was “like the heart of the Year of Mercy,” and he announced that Catholic parishes throughout Europe would be asked to take up a special collection April 24 as a sign of closeness and solidarity with people suffering because of the war in Eastern Ukraine.

The war has caused thousands of deaths and forced more than 1 million people to flee their homes, he said. Pope Francis prayed that the collection, a sign of solidarity and closeness, “could help, without further delay, promote peace and respect for the law in that harshly tried land.”

The more one receives mercy, Pope Francis said at the vigil April 2, “the more we are called to share it with others; it cannot be kept hidden or kept only for ourselves.” 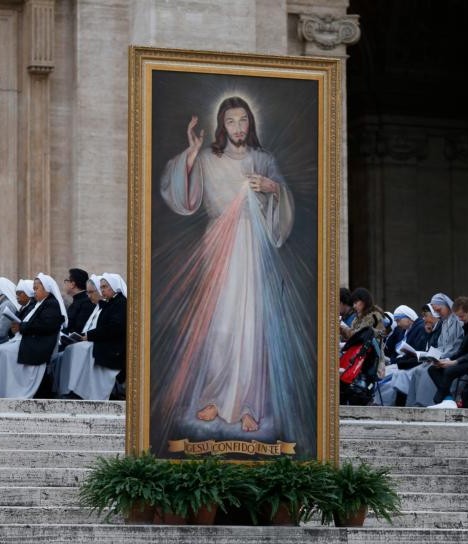 An image of Jesus of Divine Mercy is seen as Pope Francis leads a prayer service on the eve of the feast of Divine Mercy in St. Peter’s Square at the Vatican April 2. (CNS photo/Paul Haring)

God’s mercy should drive people to love others, “recognizing the face of Jesus Christ above all in those who are most distant, weak, alone, confused and marginalized,” he said.

“It pains the heart” when people talk about refugees and say, “Let’s throw them out,” or speak about the poor and say, “Let them sleep on the street,” the pope said. “Is this of Jesus?”

“If we want truly want to believe and have faith,” he said, “we must draw near and touch those wounds, caress those wounds, but also lower our heads and let others touch our wounds.”

Celebrating the Divine Mercy Sunday Mass the next morning, Pope Francis said the Gospel story of God’s mercy “remains an open book” to which people can add good news by being heralds of the Gospel and engaging in works of mercy, “which are the hallmarks of the Christian life.”

Just as the disciples were afraid but nevertheless set out as the risen Lord commanded, he said, many times Christians today experience “an interior struggle between a closed heart and the call of love to open doors closed by sin.”

“Christ, who for love entered through doors barred by sin, death and the powers of hell, wants to enter into each one of us to break open the locked doors of our hearts,” the pope said. Where people are wounded, fearful and uncertain, Christians are called to reach out with Jesus’ peace, mercy and healing power.

“In Christ, we are born to be instruments of reconciliation, to bring the Father’s forgiveness to everyone, to reveal his loving face through concrete gestures of mercy,” Pope Francis said. “Truly, God’s mercy is forever; it never ends, it never runs out, it never gives up when faced with closed doors, and it never tires.”