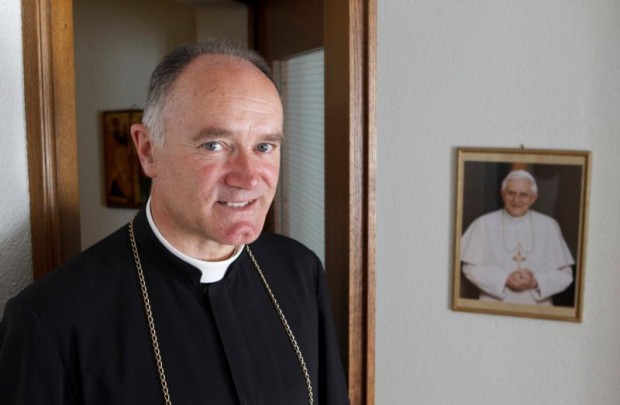 Bishop Bernard Fellay, superior of the Society of St. Pius X, is pictured in 2012 at the society's headquarters in Menzingen, Switzerland. (CNS photo/Paul Haring)

VATICAN CITY (CNS) — As discussions continue between Vatican officials and leaders of the traditionalist Society of St. Pius X, Pope Francis met at the Vatican with Bishop Bernard Fellay, head of the society.

The Vatican press office confirmed April 4 that the meeting took place but provided no details. An Italian newspaper reported the encounter occurred April 2.

Last September, Pope Francis had expressed his hopes that “in the near future solutions may be found to recover full communion with the priests and superiors of the fraternity.”

“In the meantime,” the pope wrote in the letter, “motivated by the need to respond to the good of these faithful, through my own disposition, I establish that those who, during the Holy Year of Mercy, approach these priests of the Fraternity of St. Pius X to celebrate the sacrament of reconciliation shall validly and licitly receive the absolution of their sins.”

Although the society is no longer considered to be in schism and the excommunication of its bishops was lifted in 2009, questions remained over whether the sacraments they celebrate are valid and licit. The bishops were excommunicated in 1988 when they were ordained without papal permission. Archbishop Marcel Lefebvre, founder of the society and the bishop who ordained them, also was excommunicated; he died in 1991.

Talks aimed at fully regularizing the status of the bishops, priests and faithful attached to the society have occurred, with some pauses, since 2000. The talks have focused particularly on the teaching of the Second Vatican Council and especially its documents on religious liberty, ecumenism, liturgy and relations with other religions.

In an early March interview posted on the society’s website, Bishop Fellay confirmed the talks were ongoing and “are making headway. There is no hurry, that’s for sure. Are we really moving forward? I think so. I think so, but it is certainly slow going.”

NEXT: French cardinal reiterates promise to cooperate with police on abuse