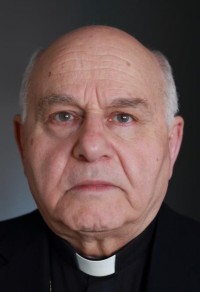 MONTREAL (CNS) — Seated in a quiet room, the Melkite Catholic archbishop of Aleppo, Syria, spoke slowly, in an almost muffled voice. His eyes sometimes ran astray, lingering on the buildings across the street in downtown Montreal. He detailed how Fouad Banna’s family was torn apart when their house was destroyed by an attack a few months ago.

“It was awful: a bomb that the rebels deliberately launched on a Christian neighborhood, on a popular borough. It has blown everything apart, destroyed countless houses. Such was the case of Fouad’s home, who died at this very moment,” he said.

Fouad’s mother and father were badly injured. Struggling for their lives in an intensive care unit, they were not able to attend the funeral of their son, a ceremony led by Archbishop Jeanbart. Fouad’s sister, Rosy, 17, was the only member of the family left unscathed by the attack.

“When I visited her, to see what I could do for her, she nestled against me and said: ‘Lord, pray so that my parents stay alive.’ I then asked her: ‘But what can I do for you?’ She answered: ‘Pray.'”

He paused for a few seconds. The silence was at odds with the scenes he painfully described.

“It’s a glimpse of the hardships happening back home. To understand the tragedy that struck our city, we have to look at its story, what it was in the past. The city is 8,000 years old. It gave civilization to the world,” said Archbishop Jeanbart, giving details about what Aleppo brought to history, culture, science and economics. Located in northern Syria, until recently Aleppo was a driving force for the country’s economy, providing work to 1.2 million workers and hosting 150,000 university students.

“More than half of the city’s population left over the last four or five years,” added the archbishop who has served there since 1995.

Ever since the war started, Archbishop Jeanbart has said that his wish is to see the population — and especially the Christians — stay in Syria. When asked what he thinks about Canada welcoming 25,000 Syrian refugees in the past few months, he was not impressed.

“We’re not happy when we see the Canadian government moving refugees and facilitating their integration. It hurts us. A lot,” he said.

Archbishop Jeanbart knows Canada well. Some of his family lives in Montreal. He said he has visited Canada about 20 times in his lifetime.

However, he said, he would rather see the Canadian government making more efforts to allow the Syrian population to stay in Syria.

“It has to help them stay where they are, to have the bare necessities, but also to find peace. And to get it over with these rebels, these terrorists, and drive both sides to talk. To find a political solution.”

The archbishop said he thinks Canadians are not aware enough of what’s happening in Syria.

“They pity the Syrians and the Christians. But do they really know about their problems? No, I don’t think so. Because if they did, they would have made efforts to end this war, to prevent it from continuing.”

While he was in Montreal in late April, the fighting continued in Aleppo, and more civilians were killed. On social media, new photos of death and destruction were once again shared, showing yet another face of distress. In front of all this desolation, Archbishop Jeanbart works to stay positive.

“I pray, and my prayer gives me a supplement of courage and faith,” he said.

“We will reconstruct our country. We want to build and stay,” he said, pounding the arm of his chair. “We want it to be our country and stay in this country where Christianity was born, and give a testimony of Christ’s love and charity, and of the possibility to live together, as men believing in God and respectful of one another.”