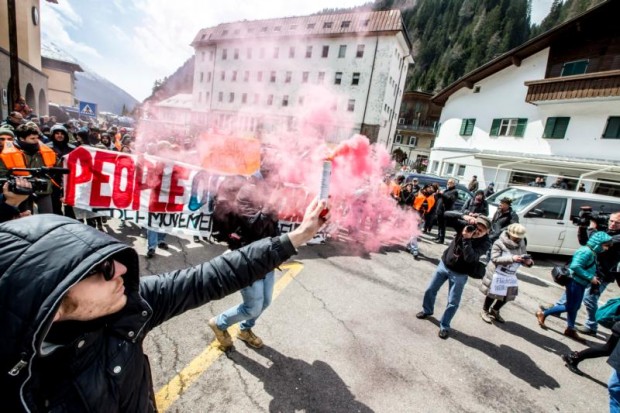 VIENNA (CNS) — An Austrian bishop said the government may not use church property to build a border fence to keep out refugees.

“A border fence contradicts both the Gospel and the clear appeal of Pope Francis to Europe,” said Bishop Agidius Zsfikovics of Eisenstadt.

“This is especially true in our diocese, which functioned in the shadow of the Iron Curtain. In recent months, we’ve done everything to open our doors to people needing help, giving them not only a roof over their heads, but also guaranteeing them dignity with an open heart,” the bishop said.

In an April 23 interview with Austria’s Kurier daily, the bishop said he had no objection to police and frontier-guard supply vehicles parking on Catholic parish territory.

However, he added that local churches had sheltered many of the 200,000 refugees who crossed the border at Nickelsdorf, Austria, in 2015, and could not agree to the new controls, especially during the current Year of Mercy.

“It’s impossible for me, in every fiber of my body, to enter the 21st century agreeing to build fences,” said Bishop Zsfikovics, who coordinates refugee assistance for the Brussels-based Commission of the Bishops’ Conferences of the European Community, or COMECE. “I grew up with the Iron Curtain and experienced the humiliations at the border crossing … we must resist them in the name of humanity.”

The Austrian Catholic news agency Kathpress said April 25 that Bishop Zsfikovics’ refusal to allow controls on church land would leave a gap in the fence at Moschendorf, on the border with Hungary. An 800-yard gap has also been left in the fence with Slovenia after local winegrowers refused to allow it to pass through their vineyards.

In November, Austria began constructing new fences on its southern frontiers with Italy and Slovenia, despite European Union warnings the move could violate the 1985 Schengen Agreement on free cross-border movement. In mid-April the government announced plans for a six-mile fence with Hungary.

The Eisenstadt diocesan spokesman, Dominik Orieschnig, confirmed April 24 the diocese had received “angry feedback from so-called Catholics” after Bishop Zsfikovics’ decision, but said the move would contradict the pope’s “clear and precise” appeal against borders during his recent visit to Lesbos, Greece.

“The refugee crisis has been a trial by fire for Christianity,” Orieschnig told Vatican Radio.

“This decision doesn’t mean our diocese has no understanding of the people’s fears and concerns. But it wouldn’t fulfill the Christian ethos to respond with fences and walls. There must be other Christian answers.”

Austria’s bishops’ conference is running a website to coordinate shelter for refugees by Catholic parishes and religious orders, with help from Caritas, which is currently housing more than 43,000 refugees.

The Austrian bishops’ conference also criticized legislation tightening asylum rules expected to be debated in May.

NEXT: True believers serve others, pope says at audience