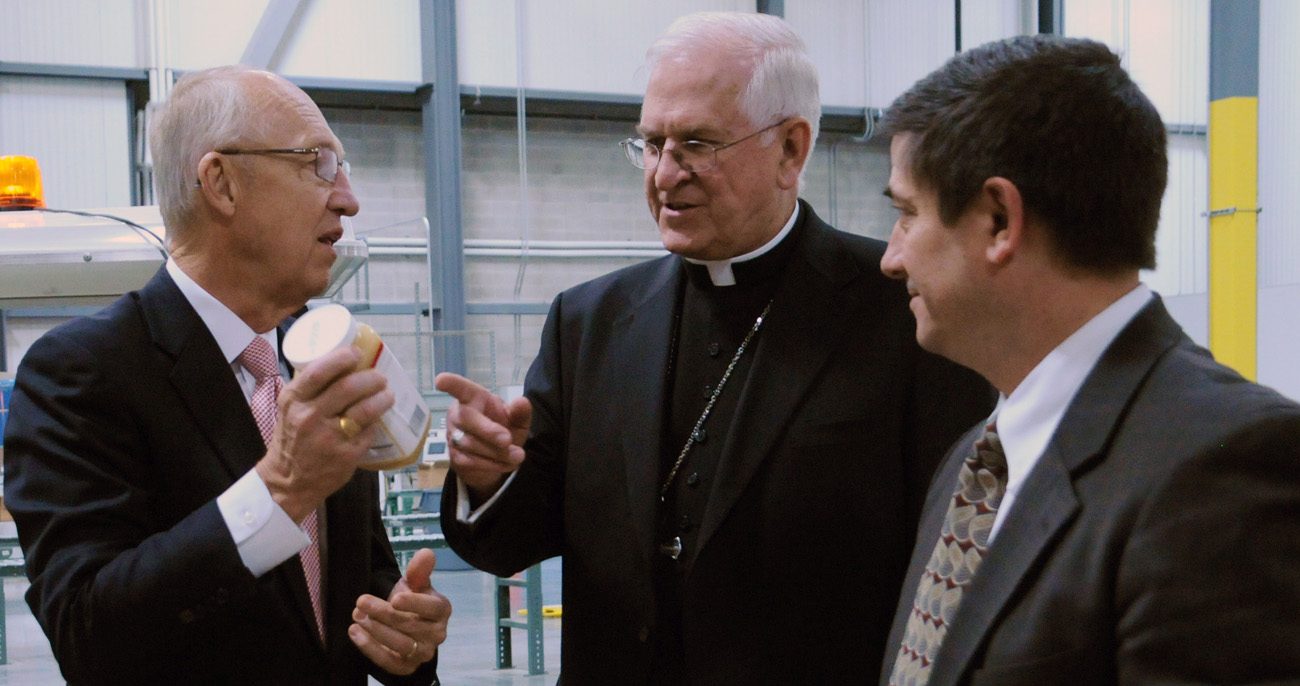 Elder Don R. Clark (left), of the Church of Jesus Christ of Latter-day Saints, explains to Archbishop Joseph E. Kurtz of Louisville, Ky., president of the U.S. Conference of Catholic Bishops, on a visit May 4 to the Central Storehouse that much of the food the LDS Church distributes to the needy has a church label. (CNS photo/Marie Mischel, Intermountain Catholic)

SALT LAKE CITY (CNS) — Archbishop Joseph E. Kurtz, president of the U.S. Conference of Catholic Bishops, and leaders of the Church of Jesus Christ of Latter-day Saints met May 4 to discuss matters of common concern and to strengthen relationships between the two churches.

The archbishop, who heads the Archdiocese of Louisville, Kentucky, was in Salt Lake City at the invitation of the LDS church leaders.

“It was a delight to meet with Archbishop Kurtz and hear his views on family, faith and religious freedom,” said John Taylor, the church’s director of interfaith relations. “Our relationship with Catholic leaders has grown tremendously over the past several years, and this visit only deepened our friendship.”

While in Utah, Archbishop Kurtz met with the Quorum of the Twelve Apostles, the Presidency of the Seventy, and the Presiding Bishopric, and toured the Utah Bishops’ Central Storehouse and Humanitarian Center, which are both in Salt Lake City.

Archbishop Kurtz said he was impressed with the hospitality he received, and that the opportunity “to see beneath the surface of the work of the Church of Latter-day Saints was so very important. Not just what’s being done but the spirit with which it’s being done; the way in which people come together to serve others.”

The visit was not only a continuation of an existing dialogue between the two churches but also an opportunity to renew friendships with people he has met through efforts such as Faith Counts, the archbishop told the Intermountain Catholic, newspaper of the Salt Lake City Diocese.

The ecumenical Faith Counts is a nonprofit that includes the USCCB, the LDS church, the Seventh-day Adventist Church, Hillel International and the Sikh American Legal Defense and Education Fund, among others, to promote faith values.

In the past year, the LDS church has invited several other Catholic officials to Utah, including Archbishop Charles J. Chaput of Philadelphia and Archbishop Bernardito Auza, who heads the Vatican’s permanent observer mission to the U.N.

The late Cardinal Francis George of Chicago spoke on religious freedom at Brigham Young University in 2010, and in the past the Salt Lake City’s Catholic bishop has worked with the LDS church on various efforts of mutual concern both locally and nationally.

LDS leaders also have addressed Catholic audiences. In 2014, President Henry B. Eyring of the First Presidency spoke at a Vatican summit on marriage and met Pope Francis, and one of the speakers at last year’s World Meeting of Families in Philadelphia was Elder D. Todd Christofferson of the Quorum of the Twelve Apostles (see CatholicPhilly.com’s coverage of his session here).

Establishing good relationships with local, national and international Catholic leaders “has created the kind of environment where we can make a difference,” Taylor said. “As we look at relationships with other faiths, I think the LDS church’s relationship with the Catholic Church has been a model in many ways.”

He added, “There’s a closeness and a trust level that has developed over the years and what we have found is that we might not agree totally on all doctrinal issues, but there are so many things that we have in common — commitment to family, commitment to helping people in need, humanitarian issues — all of these things that we hold in common, and we’ve found that if we can come together and work together there’s so much more good that can be done through that collaboration.”