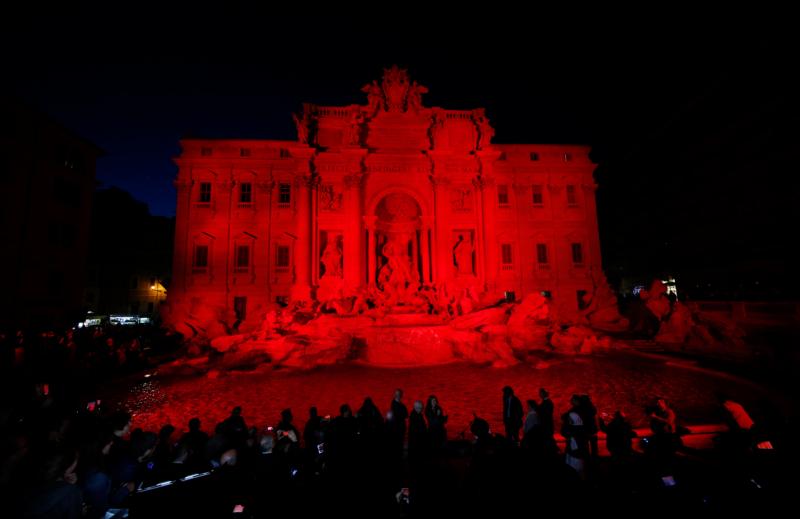 The Trevi Fountain in Rome is lit in red during an event to raise awareness of the plight of Christian martyrs April 29. (CNS photo/Paul Haring)

UNITED NATIONS (CNS) — A petition signed by more than 400,000 people called on the United Nations to act to stop the Islamic State group in its endless attacks on Christians and other religious minorities.

Presented to U.N. officials April 29 by Ignacio Arsuga, president of CitizenGo, an advocacy organization that works to defend and promote life, family and liberty around the world, the ceremony was part of three days of programming that examined the plight of religious minorities in the Middle East.

With signatures gathered online, the effort seeks to have the U.N. declare the Islamic State’s actions as genocide and for the world body to pursue legal action in international courts.

The presentation took place a day after a Holy See-sponsored event at the U.N. in which victims of atrocities spoke of their experiences while being held by the militant organization.

Bishop Bagobiri said during a session April 28 organized by the office of the Vatican’s permanent observer to the U.N. and the organization In Defense of Christians that, “Christians (in parts of Nigeria and the Middle East) are becoming an endangered species.”

He described how Christians are fleeing northern Nigeria because of attacks by Boko Haram insurgents, saying that 2014 was particularly worrisome as communities were destroyed during night raids.

Archbishop Jeanbart pleaded for help to end the five-year-long civil war in Syria and for aid to flow to the thousands of Syrians injured and displaced by violence.

People are losing hope in the world because other nations have not stepped up to end the hostilities, he said. The archbishop urged the U.N. to immediately act save more innocent people from being harmed.

“We have seen people killed, slaughtered, women violated, priests and bishops kidnapped, houses destroyed, churches and convents invaded,” Archbishop Jeanbart said, “but we persist with the help of God and with the help of those who help us.”