Reconciliation with God and others is key to peace, pope says 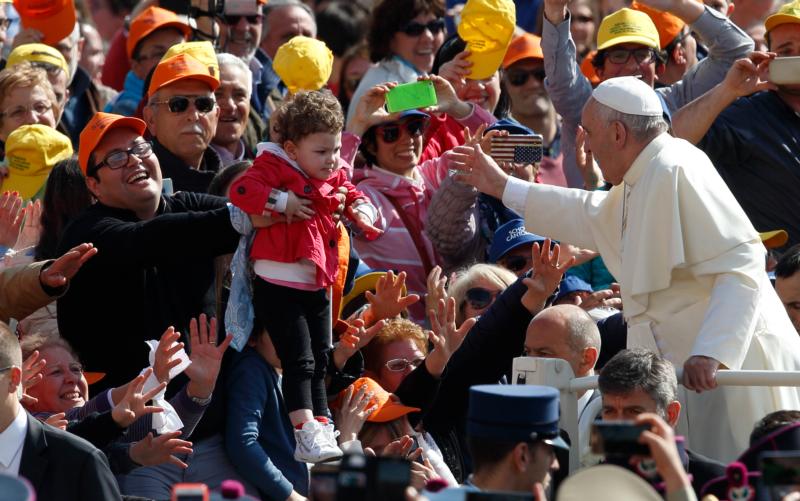 Pope Francis greets a child during a special audience for military members and their families in St. Peter's Square at the Vatican April 30. (CNS photo/Paul Haring)

VATICAN CITY (CNS) — For peace in the family, community and nation, people need to recognize their faults and ask forgiveness, Pope Francis told thousands of pilgrims, including hundreds of soldiers, sailors and police officers from around the world.

“In your families, in the various areas where you work, be instruments of reconciliation, builders of bridges and sowers of peace,” the pope told the police and military attending his Year of Mercy audience April 30 in St. Peter’s Square.

Most of the military and police participating in the special Holy Year pilgrimage were from Italy, but in his remarks to English-speakers, the pope also greeted uniformed representatives from the United States, Canada, Kenya, South Korea and the Philippines as well.

Pope Francis urged members of police forces and military not to give into discouragement even when war and violence seem to “harden hearts” and increase hatred. “Continue your faith journey and open your hearts to God, the merciful father, who never tires of forgiving us. In the face of the challenges each day brings, let shine your Christian hope, which is the certainty of the victory of love over hatred and peace over war.”

In his main audience talk, the pope told pilgrims that people often act as if God moves away from them when they sin, but in fact it is the sinner who is moving away from God. “He, seeing us in danger, comes looking for us even more,” the pope said.

The Year of Mercy, Pope Francis explained, is a time for people to turn back to God, knowing that he is always ready to forgive.

As he does frequently, the pope pleaded with priests to be welcoming and patient in confession, recognizing just how hard it is for many people to face their sins and acknowledge their need for forgiveness.

“May no one stay far from God because of obstacles placed in their path by men,” the pope said. “I’m underlining this — it goes for confessors, too. Please, do not place obstacles before those who want to reconcile with God. The confessor must be a father!”

Pope Francis told the crowd at the audience that once they experience reconciliation with God, they should look around them and see where else they need reconciliation, particularly if there are tensions within their families.

“This year is the year of reconciliation with God and among us,” he said.