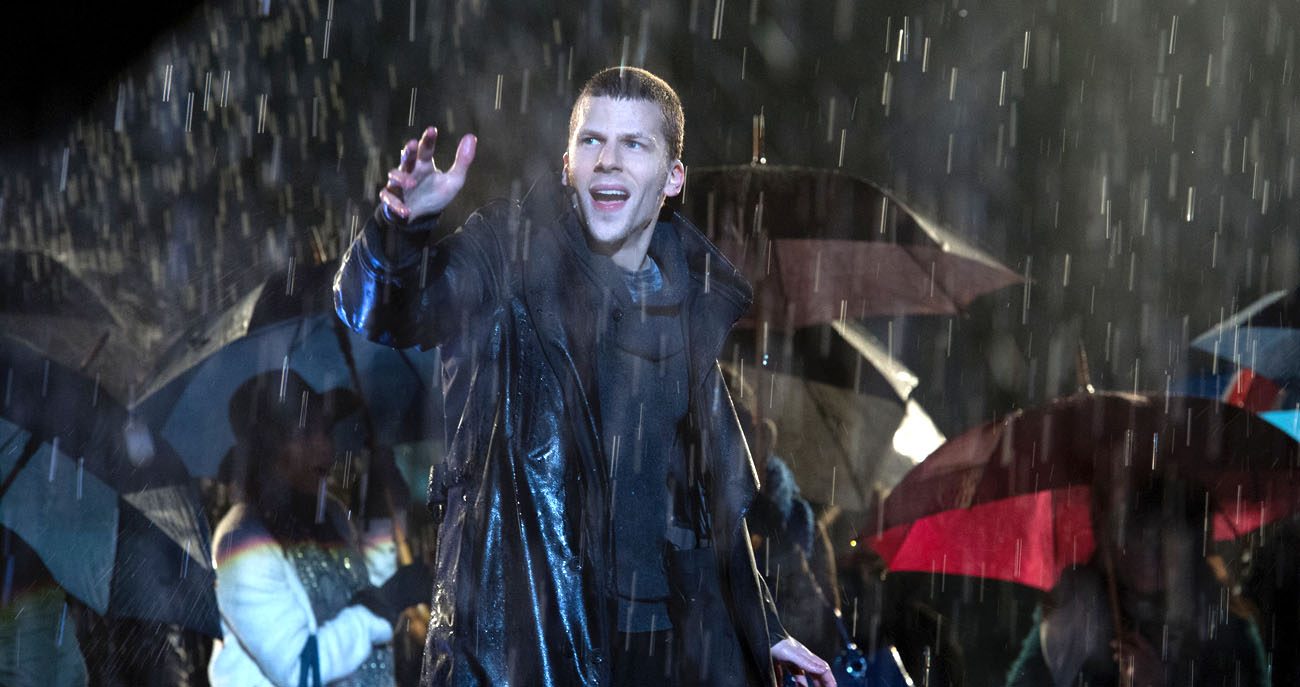 Jesse Eisenberg stars in a scene from the movie "Now You See Me 2." (CNS photo/Summit Entertainment)

NEW YORK (CNS) — There’s a moral underlying the magic-themed thriller “Now You See Me 2” (Summit). It concerns being true to yourself while not always believing in what you see. Such, it seems, is the code magicians live by.

We know this because Thaddeus Bradley (Morgan Freeman), the magic debunker and secret friend of the versatile crime-fighting “Four Horsemen” — the central ensemble of this franchise — invokes it both at the beginning and the end of the film.

On top of that, all the tricks performed by the quartet are deconstructed in great detail, as if director Jon M. Chu and screenwriter Ed Solomon are anxious for the audience not to miss any of their cleverness and what it signifies.

The point is to make these characters relatable by their accomplishment of very human stunts, even if their trademark spectacles are enhanced by complicated special effects. That’s fine, although it does give this otherwise compelling, intelligent follow-up to the 2013 original the slight cast of a Scooby-Doo cartoon.

Explaining all the gears and clockwork afterward just makes everything longer. But fans of the first outing won’t mind.

The densely constructed plot with rat-a-tat dialogue is based on a series of elaborate con games involving hypnotism, card manipulation, illusions, escape tricks and a great deal of technology.

All of this leads to a gigantic sting involving a computer circuit known as “the stick,” which can de-encrypt any system into which it’s plugged. Since the magicians are all performers, the big reveal occurs in front of a cheering worldwide audience.

This time, FBI agent Dylan Rhodes (Mark Ruffalo), who’s chasing down the Horsemen but is another of their secret pals, has a back story. He saw his escape-artist father drown in a botched stunt in 1984, and he somehow blames Thaddeus, who was there, for his dad’s death. He breaks Thaddeus out of prison just to take some form of revenge on him.

One of the Horsemen’s quick escapes, meanwhile, has similar consequences. They find themselves kidnapped, taken to Macau and delivered into the hands of smirking evil genius Walter Mabry (Daniel Radcliffe). Walter wants them to steal “the stick” from a massive, well-guarded vault.

This comes as a bit of a shock, if only because the Horsemen thought Walter, who is being backed by their former manager, billionaire capitalist Arthur Tressler (Michael Caine), was dead. As Walter observes, however, “In a world of surveillance, the only real value is in not being seen.”

Fortunately, the circuit is flat and the dimensions of a playing card, and can easily be concealed and flipped around in the film’s brilliantly choreographed set piece.

Joining the villains is Merritt’s fey twin brother, Chase (Brick Patrick). But he’s not given much to do other than heckling the magicians at key points.

The Horsemen are highly competitive by nature, yet must learn to work as a single entity to pull off their sting. So add cooperation to self-confidence in the roster of values being promoted amid the razzle-dazzle.

The film contains mild action violence, some profane and crude language and a vulgar gesture. The Catholic News Service classification is A-III — adults. The Motion Picture Association of America rating is PG-13 — parents strongly cautioned. Some material may be inappropriate for children under 13.