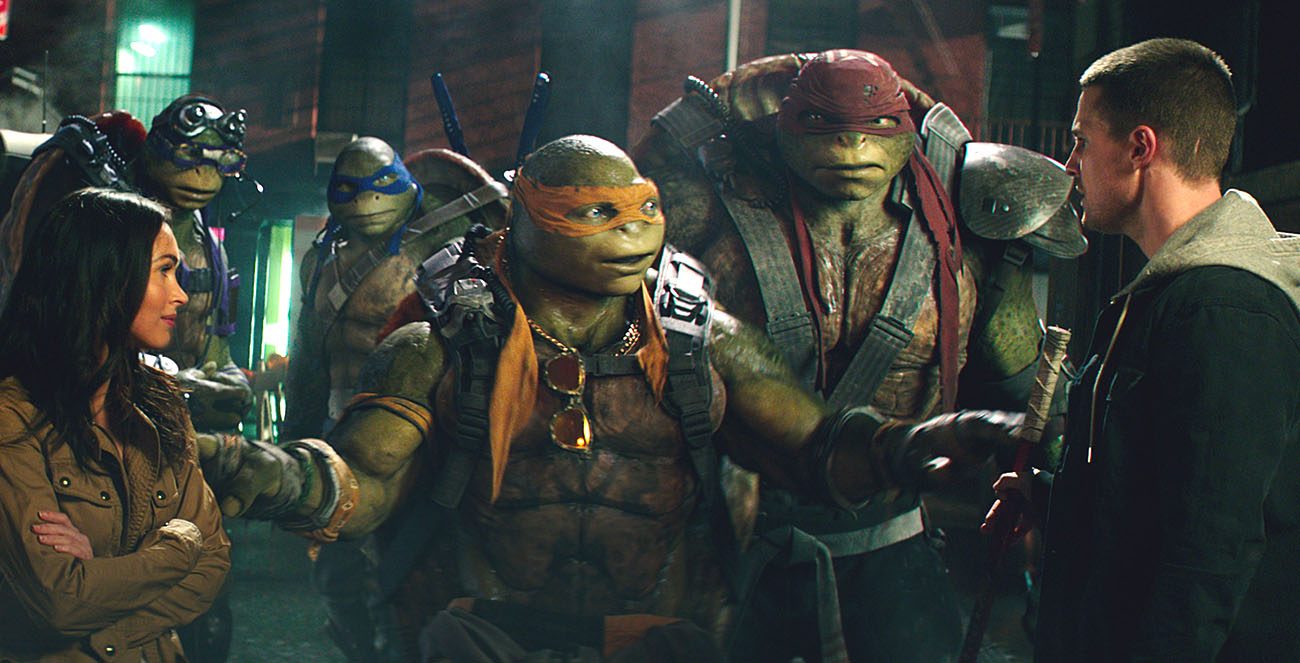 NEW YORK (CNS) — Genetic engineering explained so that 13-year-old boys can easily comprehend it is one of the features of “Teenage Mutant Ninja Turtles: Out of the Shadows” (Paramount).

Deep thoughts about science aren’t the point of this, the second film in the franchise since its 2014 reboot. They’re more like passing considerations as the nocturnal, sewer-dwelling crime-fighting terrapins take on their familiar nemesis, Shredder (Brian Tee).

Shredder has come up with a DNA-altering substance called Purple Ooze, the application of which turns humans into the violent primitive animal to which they’re most closely related.

This way, his henchmen Bebop (Gary Anthony Williams) and Rocksteady (Stephen Farrelly) can turn into a giant warthog and rhinoceros. Shredder’s goal, once he joins forces with the slimy Krang (voice of Brad Garrett) and mad scientist Baxter Stockman (Tyler Perry), is to create a giant army for world domination, as bad guys like to do.

Michelangelo (voice of Noel Fisher), Donatello (voice of Jeremy Howard), Leonardo (voice of Pete Ploszek) and Raphael (voice of Alan Ritchson) learn that when the ooze is applied to themselves, they can go the opposite direction and transform into at least a semblance of human form. This way, they’ll finally be able to fit into society.

So, a discussion of what it means to be fully human? In a Mutant Ninja Turtles movie? Are you kidding?

We’re not, but director Dave Green and screenwriters Josh Appelbaum and Andre Nemec sort of are.

The moment of self-doubt flitters by in a minute, then the filmmakers remain faithful to the tropes of action pictures with ramped-up CGI animation.

The green guys, helped as always by their pal April (Megan Fox), return to the importance of teamwork as they resume their hyperkinetic adventures, which include skydiving, racing down highways around New York City, zooming down the Amazon River in search of a missing part needed for a teleportation device, and befuddling human police officers.

This is a film with a clear target audience of adolescent boys. It has no more larger purpose than any thrill ride, video game or bag of candy. No learning will take place.

The film contains intense action sequences, cartoonish violence and a single scatological reference. The Catholic News Service classification is A-II — adults and adolescents. The Motion Picture Association of America rating, PG-13 — parents strongly cautioned. Some material may be inappropriate for children under 13.