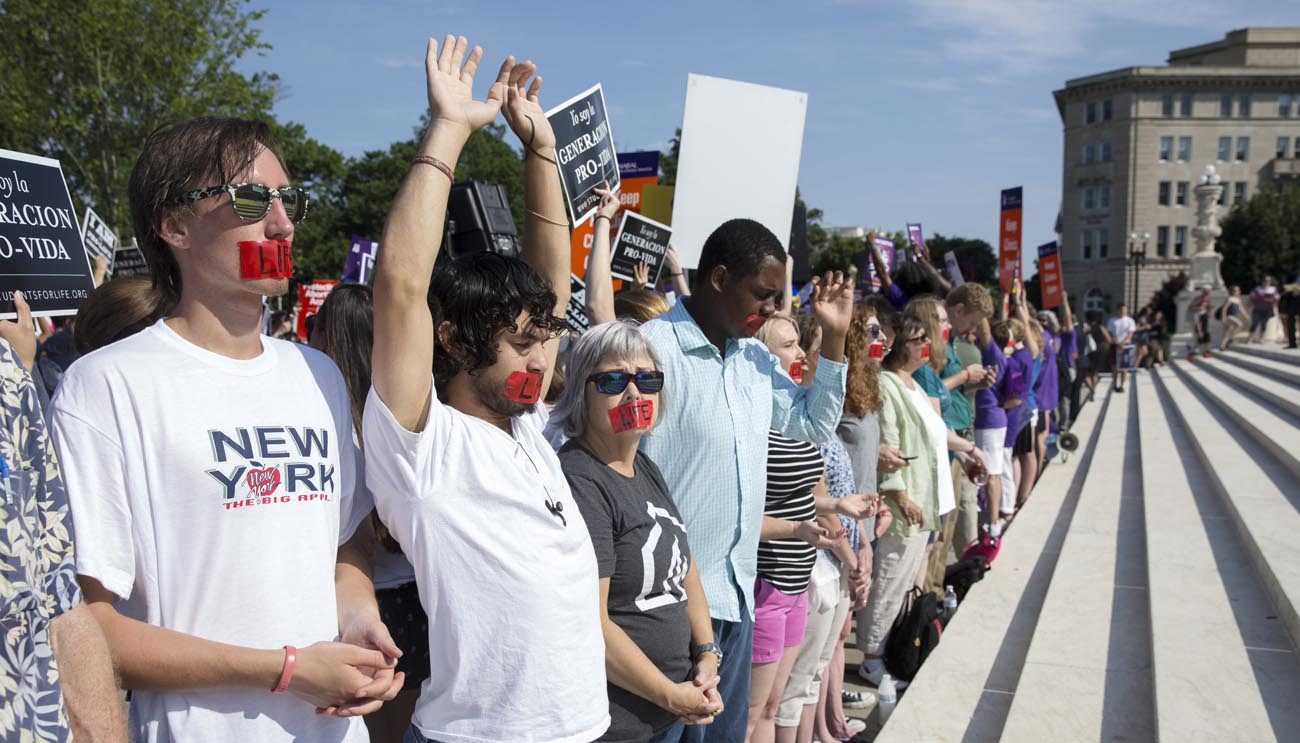 Pro-life supporters pray at the steps of the U.S. Supreme Court June 27 during protests in Washington. In a 5-3 vote that day, the U.S. Supreme Court struck down restrictions on Texas abortion clinics that required them to comply with standards of ambulatory surgical centers and required their doctors to have admitting privileges at local hospitals. (CNS photo/Michael Reynolds, EPA)

WASHINGTON (CNS) — The day after the U.S. Supreme Court issued a major abortion ruling striking down regulations on Texas abortion clinics and doctors, it rejected an appeal to reinstate laws in Mississippi and Wisconsin that would place similar requirements on abortion doctors.

It also denied an appeal of a Washington state rule requiring pharmacists to dispense Plan B or other emergency contraceptives despite their religious objections to doing so.

The court June 28 refused to hear appeals from Mississippi and Wisconsin challenging lower-court rulings blocking their laws similar to the one in Texas that require abortion doctors in the two states to have admitting privileges at nearby hospitals.

Federal appeals courts in Chicago and New Orleans had previously ruled against the states.

Wisconsin Attorney General Brad Schimel said in a statement that the court’s decision was “not surprising” after its rule on the Texas law. He had filed a friend-of-the-court brief in the Texas case.

According to The Associated Press, if Mississippi’s law had been enacted it would have likely led to the closure of the state’s only abortion clinic.

The Supreme Court also refused to hear an appeal from pharmacists who have religious objections to a Washington state law that requires pharmacies to dispense Plan B or other emergency contraceptives also called “morning after pills.”

Chief Justice John Roberts and Justices Samuel Alito and Clarence Thomas said they would have heard the appeal and Alito wrote a 15-page dissent against the court’s decision not to hear the case, calling it an “ominous sign.”

“If this is a sign of how religious liberty claims will be treated in the years ahead, those who value religious freedom have cause for great concern,” he added.

A trial judge ruled twice for the pharmacists in the long-running lawsuit Stormans Inc. v. Wiesman, but was overturned by the U.S. Court of Appeals for the 9th Circuit.

Even before the Supreme Court issued a decision on whether it would take the case, the pharmacists’ case already had gathered 14 friend of the court briefs from supportive groups, groups supportive of the including the U.S. Conference of Catholic Bishops.

The case was filed with the court by the legal group Alliance Defending Freedom.

Kristen Waggoner, a senior counsel with the firm, said in a statement: “No one should be forced to participate in the taking of human life. We had hoped that the U.S. Supreme Court would take this opportunity to reaffirm these long-held principles.”

She added that the state of Washington allows pharmacists to refer customers to other pharmacists for just about any reason — except reasons of conscience — and the other 49 states allow conscience-based referrals, which are fully supported by the American Pharmacists Association and dozens more pharmacy associations.

“We are disappointed that the high court didn’t take this case and uphold the (federal district) trial court’s finding,” she added.

In court papers, Washington state officials argued that while individual pharmacists can refuse to fill an order, an entire place of business cannot refuse to fill a legal prescription. It also said the pharmacy’s main objection of dispensing emergency contraceptive is not as strong because the product is now available over the counter.

The pharmacists, Margo Thelen and Rhonda Mesler, and the Stormans family, who operate the family-owned pharmacy Ralph’s Thriftway, in Olympia, Washington, have been fighting the issue in court since 2007. That year a federal district court rule din favor of the Stormans, but that decision was overturned by the 9th Circuit.

Their appeal of the state law described them as “Christians who believe that life is sacred from the moment of conception.”

“Because of their religious beliefs,” the appeal said, the petitioners cannot stock or dispense emergency contraception noting that “dispensing these drugs would make them guilty of destroying human life.”