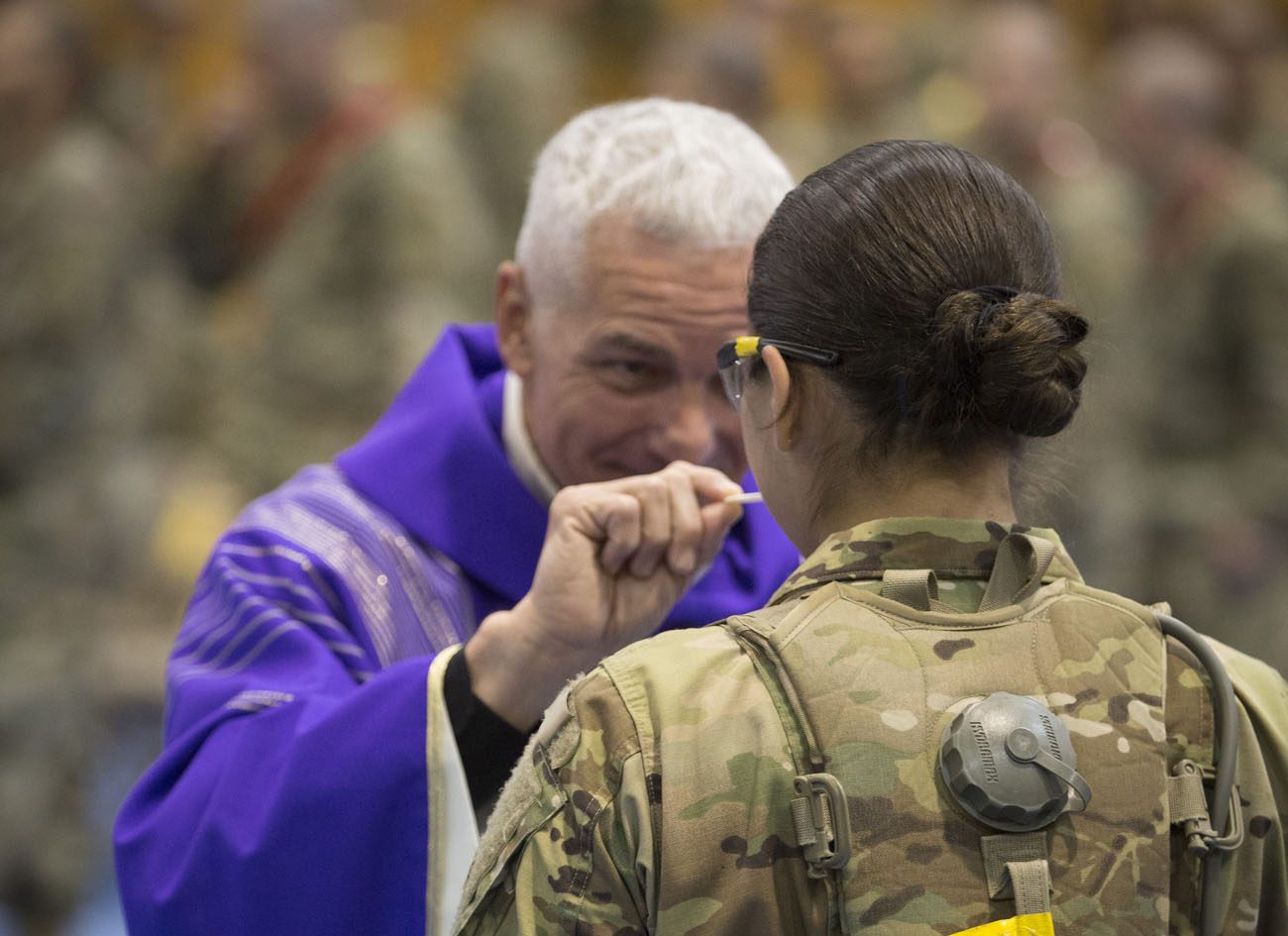 Father John G. Breaux Jr., a priest from the Diocese of Lafayette, La., gives Communion to a new Army soldier during a Mass in March at Fort Jackson in Columbia, S.C. Father Breaux was training for his new role as a military chaplain at the U.S. Army's Chaplain Basic Officer Leader Course at Fort Jackson. (CNS photo/Chaz Muth)

WASHINGTON (CNS) — At first glance, it’s difficult to distinguish Father Lukasz J. Willenberg as a Catholic priest as he gathers with U.S. Army paratroopers preparing for a training jump at Pope Field near Fayetteville, North Carolina.

Instead of wearing the traditional black clerics, the 34-year-old Polish immigrant is sporting fatigues, a camouflage helmet and a contraption strapped to his back that will release a parachute after he jumps out of a military aircraft, along with the scores of other soldiers waiting in that same harness shed on a warm March afternoon earlier this year.

Shortly before the men and women are called to board the aircraft, Father Willenberg stands up, and with the heavy jump gear fastened to his fit body, he sluggishly makes his way to the center of the shelter to lead everyone in a prayer.

Yes, this priest prays, works, trains and jumps out of airplanes with the men and women in the second battalion of the 3rd Brigade in the U.S. Army’s famed 82nd Airborne Division’s 505th Parachute Infantry Regiment located at Fort Bragg in Fayetteville.

Though he is an ordained priest of the Diocese of Providence, Rhode Island, Father Willenberg also is a captain in the U.S. Army and one of the dwindling numbers of Catholic chaplains serving in the U.S. military.

Chaplains have had a presence in the American military since the U.S. Army Chaplains Corps was established July 29, 1775.

Military chaplains are commissioned officers serving in the U.S. Army, Navy, Air Force, Marine Corps and Coast Guard. The priests are basically on loan from their dioceses while they serve. Unlike traditional parish priests, most chaplains work side-by-side with their flock.

“I spend most of my day with the people I serve with, so my involvement in their lives is definitely more intensified than when I served as a parish priest,” Father Willenberg said. “It’s the commission of Jesus in the purest sense, to go out and preach and teach and baptize, go everywhere basically and give yourself completely to those you are with.”

He views his chaplaincy as a way of fulfilling Pope Francis’ call to priests to get out of their rectories and smell like the sheep.

“It’s the beautiful aspect of being a chaplain,” Father Willenberg said. “As a priest, there is no greater fulfillment. There are so many opportunities to impact the lives of the people we serve with and their families.”

To say there is a shortage of Catholic military chaplains currently serving in the U.S. armed forces is an understatement, according to Archbishop Timothy P. Broglio of the U.S. Archdiocese for the Military Services in Washington.

The U.S. Department of Defense estimates there are 1.3 million active duty and 811,000 reserve men and women serving in all five branches of the U.S. military, about 25 percent of whom are Catholic.

Yet, there are only 214 priests on active duty serving in the U.S. military, accounting for about 8 percent of the chaplain corps, Archbishop Broglio told Catholic News Service during a June interview.

It’s about 500 priests fewer than the archbishop says there should be just to meet the pastoral needs of the people serving in the armed forces and their families.

So, if you break the current numbers down just for the active duty service men and women, there are currently 214 chaplains serving approximately 325,000 Catholics in the U.S. military, or about a priest for every 1,519 Catholic and that doesn’t include their family members.

The military does contract with priests near several military installations to help out and in some cases serve as the Catholic presence, but there is always a preference for a chaplain who is actually embedded in that particular branch of the armed forces, Archbishop Broglio said. 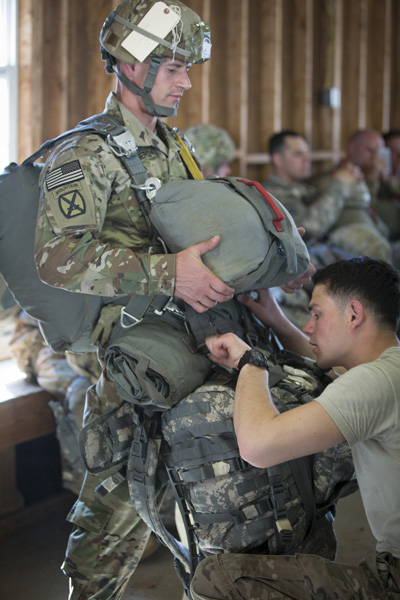 A jump master checks the parachute worn by Father Lukasz J. Willenberg March 9 at Camp Mackall Army Base in Southern Pines, N.C., shortly before he jumped out of an airplane during a military training exercise. Father Willenberg, who holds the rank of captain, is a U.S. Army chaplain at Fort Bragg in Fayetteville, N.C., and trains as a noncombat paratrooper with the 82nd Airborne Division. (CNS photo/Chaz Muth)

“There is a tremendous gap between the need for Catholic priests and their actual presence in the military,” he said. “This means that you have installations where if the archdiocese is unable to find a contractor who might fill in for the military chaplain, there simply isn’t a Catholic program.”

So far the archdiocese has been able to ensure a chaplain is on every aircraft carrier in the U.S. fleet, allowing each of these men to minister to all of the surrounding ships, but with only 48 priests currently serving in the U.S. Navy, Archbishop Broglio isn’t sure that can continue to be the case.

Contract priests tend to be older clergy members, sometimes they are former military, and in cases where there is no chaplain available, they are able to offer essential Catholic services and can be available for counseling.

Though Archbishop Broglio is grateful for each contract priest who serves, he said that “his ability to minister is limited by the fact that he doesn’t necessarily have the security clearance and he can’t always go where the men and women work.”

There are a number of reasons why the number of military chaplains has dropped from more than 400 at the turn of the 21st century to the current 214.

There are fewer priests serving in U.S. dioceses than during the vocations heyday of the mid-20th century.

Though there has been a bit of an uptick in ordinations in recent years, most dioceses and archdioceses are still ending up with a net loss of clergy, because for every priest ordained each year, sometimes two are leaving ministry because of retirement or death.

Another factor is that priests tend to be older at ordination than Protestant clergy, making the physical demands and the age requirements of serving in the military more restrictive for many current Catholic priests, Archbishop Broglio said.

It’s also a difficult decision for a bishop or archbishop to release one of their priests to serve in the military, since most of them are dealing with clergy shortages of their own.

When Providence Bishop Thomas J. Tobin was approached by Father Willenberg about his desire to service as an Army chaplain, the answer wasn’t immediately yes.

Bishop Tobin’s primary responsibility is to Catholics in the state of Rhode Island and he told CNS that losing the “ministry of a fine young priest like Father Luke” was a significant sacrifice for the diocese.

He ended up releasing Father Willenberg to serve for at least a three-year tour in the army, but said he struggled with the decision.

Numerous recruiting efforts have been employed to bring more priests into the military chaplaincy corps, including biannual discernment retreats for interested eligible clergy.

The Archdiocese for the Military Services also now has a full-time vocations director.

Though Archbishop Broglio has been encouraged by the number of recruits in recent years, he said it will take years of steady increases to reach the number of Catholic chaplains he really needs.

Though the armed forces chaplaincy is most frequently viewed as a positive military component, some Catholic peace organizations object to priests serving in institutions that engage in war.

Melkite Father Emmanuel Charles McCarthy of Brockton, Massachusetts, a co-founder of Pax Christi USA, sees a conflict of interest for a follower of Jesus Christ to serve in, and be paid by, a branch of the armed services, which sanction the killing of other humans in combat situations.

Father McCarthy doesn’t have a problem with priests providing pastoral care to soldiers, airmen, sailors, Marines or members of the Coast Guard. However, he believes that being a commissioned officer in the military makes it impossible for that priest to maintain his objectivity when preaching the Gospel message that killing any human is an act of evil.

But Archbishop Broglio and the numerous chaplains interviewed by CNS say chaplains have an essential role in the military. They all say having priests embedded in each branch of the military provides them access to serve as a moral compass to those who make life and death decisions.

“A large part of my effectiveness comes because I live the life of the people that I serve,” said Father Michael A. Mikstay, a Navy chaplain currently serving at Marine Corps Recruit Depot San Diego. “Those hardships that men and women endure in combat, I endure in combat.

“That gains me entrance into people’s lives that can’t be accomplished simply because you’re a clergy person,” he told CNS during a May interview. “My credibility rests on that very fact that wherever that unit, that command that I’m assigned to goes, I go. Whatever training they do, I do. They’re sent to combat, I go. Day in and day out, especially in war, we’re there.”

PREVIOUS: Catholic Church has right to be heard in public square, says cardinal