Catholic Church has right to be heard in public square, says cardinal 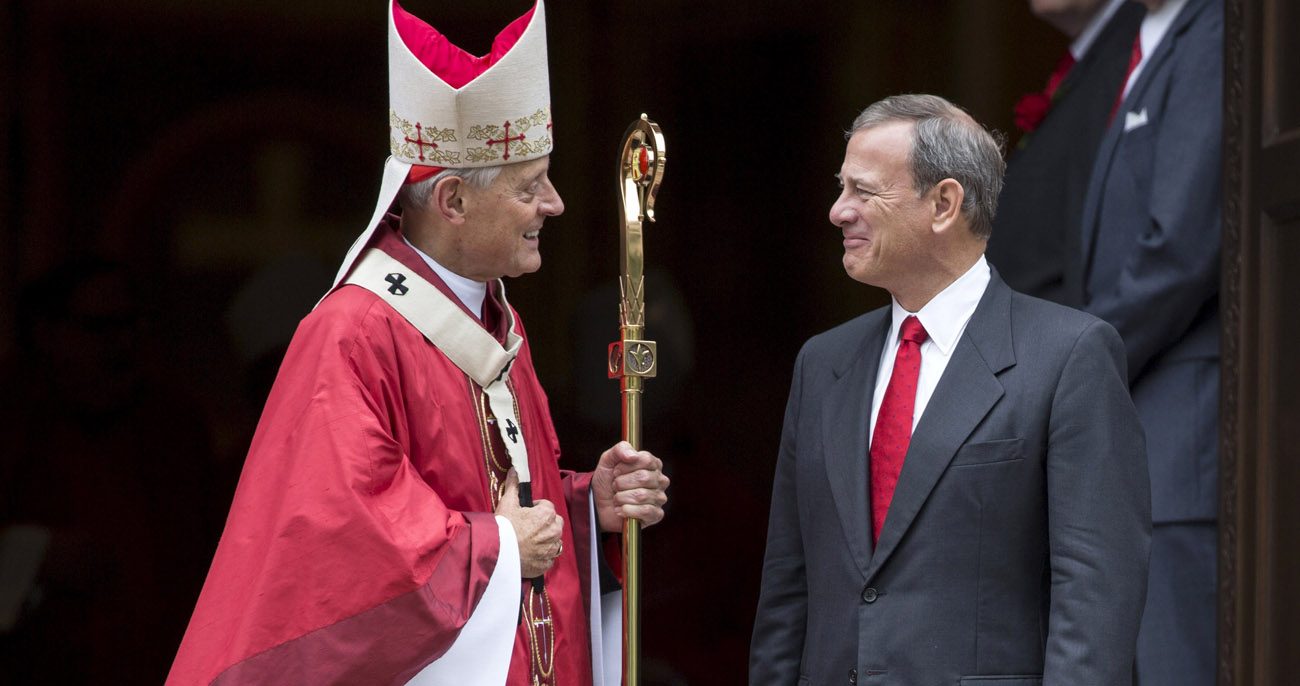 Cardinal Donald W. Wuerl of Washington talks with U.S. Chief Justice John Roberts as they leave the Cathedral of St. Matthew the Apostle in Washington after the annual Red Mass in this Oct. 4. 2015, file photo. (CNS photo/Joshua Roberts, Reuters)

WASHINGTON (CNS) — The Catholic Church’s teachings on morals and social justice not only have a right to be heard in the public square, but add to creating a better society for all, Washington Cardinal Donald W. Wuerl said during an address at the American Enterprise Institute.

“There are fundamental truths against which our judgments and our legislative decisions should be measured, and to which we are all called to conform,” Cardinal Wuerl said. “This is not an imposition of narrow moral judgments, but a recognition of right and wrong, of basic fundamental human values.”

Cardinal Wuerl made his remarks June 23, when he gave a keynote address at the institute’s daylong conference, “Catholic Thought and Human Flourishing: Culture and Policy.”

The American Enterprise Institute, a Washington-based think tank that examines government, political, economic and social welfare issues, hosted the gathering to explore what it called “the intersection of Roman Catholic thought and U.S. public policy and culture.”

Cardinal Wuerl, during his talk, lamented what he called an “assertion of the primacy of the secular” in today’s society, which “tempts us to transfer authorship and ownership of all human life to ourselves.”

“There is a movement in some parts of our society to move away from the basic religious values,” Cardinal Wuerl said. “The assertion of the primacy of the secular comes with its own biases, its own orientations, its own orthodoxies.”

He said society faces “a daunting challenge” to protect “the self-evident truth of ‘One nation under God with liberty and justice for all.'”

By separating religious values and morals from society, Cardinal Wuerl said, “we have a culture that is losing respect for human life and dignity, family and sacrifice for others … We are losing a sense of right and wrong and the intrinsic value of every human life.”

Pointing to issues of racism, poverty, discrimination, abortion and other societal problems that are addressed without a religious framework has led to “a polarized society” with “dysfunctional politics that too often demonstrate paralysis and little cooperation working towards the common good.”

He called on politicians and others to “lower the decibel level and increase the respect with which we address each other.”

Noting that today’s political climate “is increasingly marked by an abandonment of civility,” Cardinal Wuerl said that “sadly some Catholics identify more with their own political party, ideology and interests rather than with the obligation that flows from the Gospel itself, and the words of Jesus Christ and the teaching of the church in her social and moral teachings.”

“Religion and religious principles, enhance, they don’t diminish our search for the common good,” he said. “They enrich, they don’t threaten pluralism.”

He warned “politics can be just about power, money, expediency and the contest of very narrow interests without solid, moral and social justice principles to guide us.”

“The foundation, the unfolding of our way of life — the way of life we have recognized from our country’s very beginning — has always recognized that good public policy that results in a good and just society and virtuous citizens ultimately must have some religious antecedents,” Cardinal Wuerl said. “There are moral imperatives not created by us. We don’t get to create right and wrong.”

He added that there will be “a mess we face if there are no solid moral and social justice principles to guide us” and to which “laws should be measured and called to conform.”

“Long accepted moral principles should not be seen as a threat, we should recognize them as a blessing,” Cardinal Wuerl said. “To speak out (with a moral or religious voice) is not to force values upon society but to call it back to recognize its own long accepted moral principles and traditional commitment to defend basic human dignity and life. It is not a threat, it is a blessing.”

He said the Archdiocese of Washington and other Catholic entities are working hard to protect “religious liberty as a basic, fundamental right.”

The archdiocese has joined with other dioceses, the Little Sisters of the Poor and other Catholic groups to fight the Health and Human Services mandate that would force those entities to violate their beliefs by providing abortion and contraceptive coverage in their health plans.

“We are standing up in court for religious rights,” Cardinal Wuerl said. “We are not asking for special treatment. This is not just to protect a narrow privilege, but to uphold the constitution and exercise our right to minister to the least of our brothers and sisters.”

He said that “recognition of human values remain at the heart of the American experience.”

Calling the Catholic Church’s social teaching “nuanced and complicated,” he said, “the church’s social and moral vision is complex and cannot be reduced to sound bites.”

He asked those at the conference to consider “how much more harsh would our world be if we did not grow up hearing, ‘Blessed are those who hunger and thirst for righteousness, blessed are the merciful, blessed are the peacemakers.'”

He urged young people especially “to be engaged in the sanctification of the temporal order.”

“You know in your heart there is a right and wrong. Bring that with you into whatever vocation Providence has called you,” he said.

He called on young people to bring their religious values to “political, medical and entrepreneurial enterprises.”

“Remember you count and you can make a difference and you can renew the face of the earth. Now go do it,” he said.

NEXT: For God and country: Priests navigate U.S. armed forces as chaplains