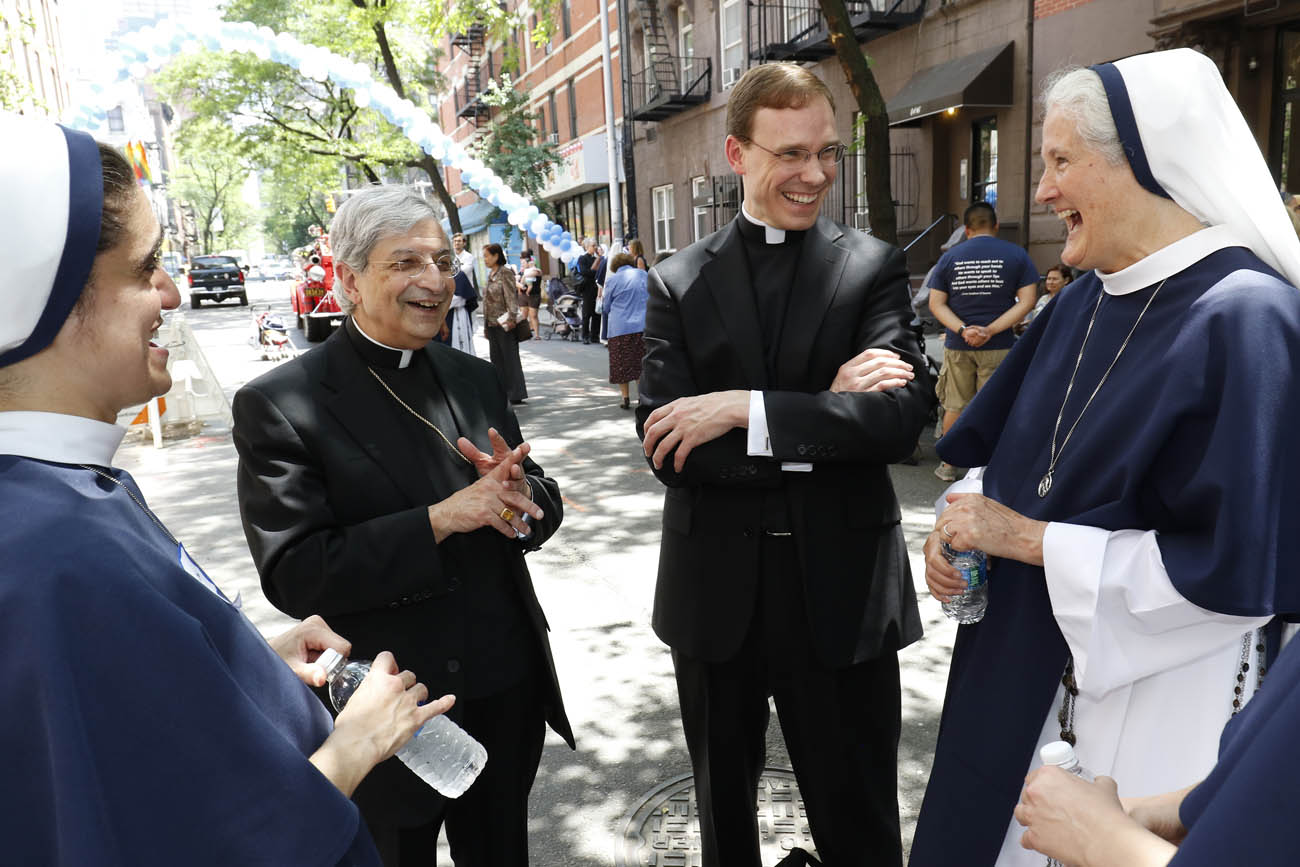 Yes, the requisite elements were there: colorful balloons arched across one end of a closed-off block, face-painters, kids’ games, food, bubbles, and live music. But the Sisters of Life block party outside their home on West 51st Street also featured a eucharistic procession, spontaneous prayer, and a lighthearted opportunity to be photographed with white roses and a gold halo. And one could hardly overlook the young sister with a fire helmet over her veil helping children climb on a “North Pole” fire truck and engage its siren.

People have come to expect the unexpected from the Sisters of Life, who celebrated the 25th anniversary of their founding June 1 with a joyful Mass at St. Patrick’s Cathedral and a block party with 1,200 of their friends and family on hand.

In his homily at the Mass, New York Cardinal Timothy M. Dolan said there were towering challenges to consecrated life when the religious order was established in 1991 and skeptics wondered if the sisters would be able to sustain their mission.

“But you’re a booster shot for all of us,” he said, proving that “renewal and rebirth are part of the Lord’s thesaurus.”

Cardinal Dolan recounted how his late predecessor, Cardinal John J. O’Connor, issued “a historic dare, thrown out there with his characteristic swagger” that led to the establishment of the order. In his column in Catholic New York, the archdiocesan newspaper, Cardinal O’Connor invited women to consider joining a new contemplative and active religious community dedicated to protect and enhance the sacredness of every human life.

“A community which 25 years ago numbered eight eager and young postulants has grown to nearly 100 women,” said Mother Agnes Mary Donovan, superior general of the order. She was one of the first members and has led the congregation for more than 20 years.

Cardinal Dolan concelebrated the jubilee Mass with Cardinal Thomas C. Collins of Toronto, nine other bishops and more than 45 priests.

“The trust placed in the most noble cause of life by the Sisters of Life two and a half decades ago has been validated beyond belief,” Cardinal Dolan said. He invited Mother Agnes Mary and all the sisters to celebrate the 50th jubilee June 1, 2041 at Yankee Stadium in the Bronx, which he laughingly predicted would be “jampacked with hundreds and hundreds of Sisters of Life and babies who will be adults by then.”

In remarks at the end of Mass, Mother Agnes Mary acknowledged the support of clergy, fellow religious, families, donors and co-workers.

“Through the years, we have been supported first by New York priests distinguished by their fidelity to Jesus Christ, vibrant orthodoxy and loyalty to their archbishop. They are our daily Mass chaplains, teachers, confessors, spiritual directors, mission collaborators and friends in the Lord, bringing Jesus to us each day in the Eucharist, the source of our strength and our joy,” she said.

About 1,000 people attended the Mass who afterward made their way along 51st Street from the cathedral on Fifth Avenue to the block party between and Ninth and 10th Avenues. On the street between the sisters’ Holy Respite mission at Sacred Heart Convent and Sacred Heart Church, they shared box lunches and ice cream, listened to music by the Peace Industry Band, and offered congratulatory hugs to the sisters.

Current and former guests of the sisters showed off their babies and toddlers. Supporters, volunteers and a bishop sat on the steps of a brownstone sharing laughter and updates. Guests were invited to write notes to Mary that were then posted on a bulletin board.

One of the most popular stops was a table where self-identified potential saints could step inside a gilt frame against a backdrop of gold cloth. While an unseen sister held a gold halo, the not-yet-canonized assumed beatific poses reminiscent of holy cards.

Social worker Michelle Dunn said her outlook on life changed after she encountered the sisters by accident in her neighborhood.

“Therapy dogs I was walking by their mission were attracted to a pregnant woman sitting on the steps.” Dunn said. She knocked on the door to see if she could help. As she volunteered with the sisters, she said, “They helped me understand there’s a loving, joyous, stable community here.”

Volunteer Colette Dempsey complimented a young boy in his Sunday-best outfit on creating giant soap bubbles that wafted over her. Looking at the diverse group up and down the block, she said, “I think Cardinal O’Connor was a prophet and we’ll see him brought to sainthood for founding the Sisters of Life. We’ve lost the dignity of the family and they’re bringing it back. They’re so giving. If someone’s at risk, they walk right with them. They don’t judge. They don’t give up.”