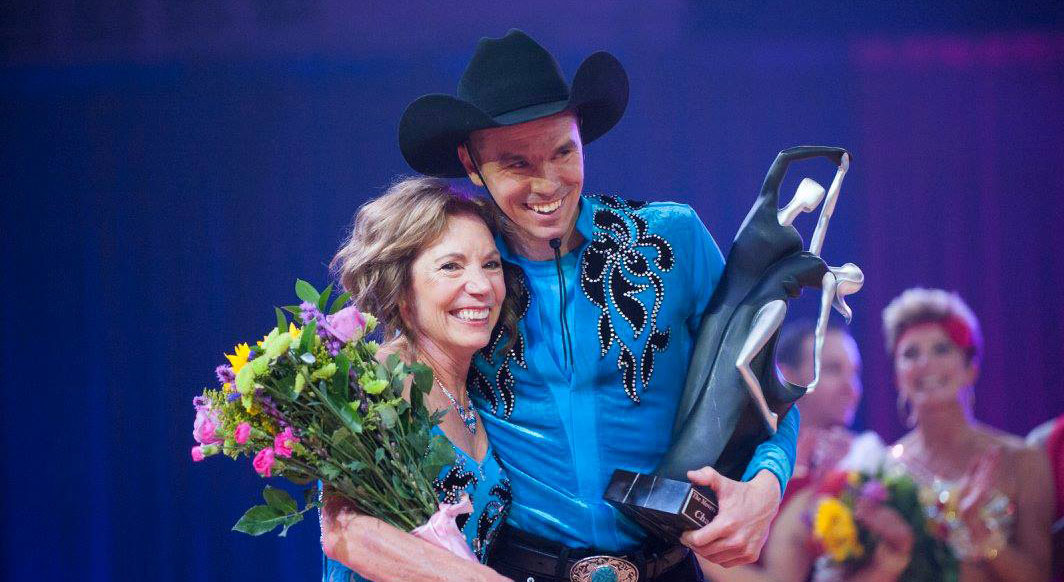 Father Matthew Widder, pastor of Holy Name of Jesus and St. Clement parishes in Sheboygan, Wis., with Susan Alby, after winning the 2016 Movers and Shakers Gala dance championship May 14, a benefit for Lakeland College in Sheboygan. (CNS photo/courtesy Lakeland College)

MILWAUKEE (CNS) — Father Matthew Widder is more than comfortable in his black clerics and Roman collar. Give him a lasso, cowboy hat, and dancing boots and the pastor of Holy Name of Jesus and St. Clement parishes in Sheboygan admittedly is out of his comfort zone.

But that didn’t stop the 33-year-old priest from Texas two-stepping his way into victory at the Movers and Shakers Gala, a black tie fundraising event for Lakeland College in May.

In addition to claiming the evening’s trophy with dance partner and instructor Sue Alby, Father Widder’s charity of choice, the archdiocesan Society of St. Vincent de Paul, will receive $10,000.

Father Widder and Alby bettered seven other dancing couples, comprised of a local “celebrity” and an instructor, through a combination of judges’ scores and the most purchased votes.

Days after the win Father Widder admitted he was in shock, not only over the outcome but over the fact that he even participated.

“One of my greatest fears in life is dancing,” he admitted to the Catholic Herald, Milwaukee’s archdiocesan newspaper. “Some people say they can’t dance, but when I say I can’t dance, I really can’t dance.”

Persuading him to take part in the annual dancing event was not easy, admitted Kym Leibham, a Holy Name parishioner who is alumni and community engagement officer at Lakeland College, which is affiliated with the United Church of Christ.

Coordinator of the college’s annual gala, Leibham said she was at one of Father Widder’s Masses last summer and said her mind was not completely focused on his homily. Rather, she said, she was amazed at how the rest of the worshippers seemed drawn to him.

“I was observing how the parishioners were responding to Father Matt and I thought to myself, he’d be a great dancer for the gala.”

After Mass ended, she approached him and told him what she had in mind.

“He looked at me like he had just seen a ghost,” Leibham recalled, adding that Father Widder mentioned that just the night before he was at a birthday party when a young man asked what he is most afraid of.

He responded, only two things, recalled Leibham: rats and dancing.

Eventually Father Widder agreed. He was paired with Alby, a professional dancer who has studied ballet, tap, jazz, modern and ballroom dancing. Beginning in January, the pair met weekly to rehearse at the Sheboygan YMCA.

When Alby first met Father Widder, she realized she had a challenge on her hands.

“Yes, Father Matthew was not a dancer. He has had absolutely no dance experience,” she said, describing “the huge path he was undertaking when he agreed to compete.”

As a nod to Father Widder’s background growing up on a Sheboygan Falls farm, Alby chose to do the two-step because of its “down home” feel. Alby settled on “That Gospel Music” by Marty Stuart as the piece to choreograph which, she said, “has a wonderful message about this gift of music that can transform and uplift us.”

After weeks of practice, the big night finally arrived. Father Widder and Alby were the last dancers to perform, and the priest noted butterflies had taken over. Leibham, the backstage producer for the event, remembers seeing the fear on the priest’s face before he went on stage.

But when the music began, Leibham said instincts took over and to the delight of the crowd of 650, including Milwaukee Archbishop Jerome E. Listecki, Father Widder began swinging his lasso and clicking his heels, twirling around the dance floor as if he had been dancing for years.

Father Widder has a slightly different memory of the moment. He said his whole body went numb.

“Once the dance started, I had a sense of calm and in the beginning initially with the rope I was fine, but then my mind went brain dead,” he explained, seemingly forgetting the steps that by this point were second nature to him.

The audience began clapping to the music and gave the pair a standing ovation when they were finished.

While Father Widder said the gala probably signals the beginning and end of his dancing career, he said he was pleased to help not only with Lakeland’s fundraising, but the Society of St. Vincent de Paul as well.

“St. Vincent de Paul is a beautiful organization because they serve the poorest of the poor and there is a beautiful humility to it as well,” he said. “So for two reasons it was a great way to get funds to those who serve the most in need and secondly, I think it’s important that the St. Vincent de Paul society gets a little acknowledgement for the things they are doing.”

NEXT: Faced with ‘insurmountable challenges,’ St. Catharine College to close