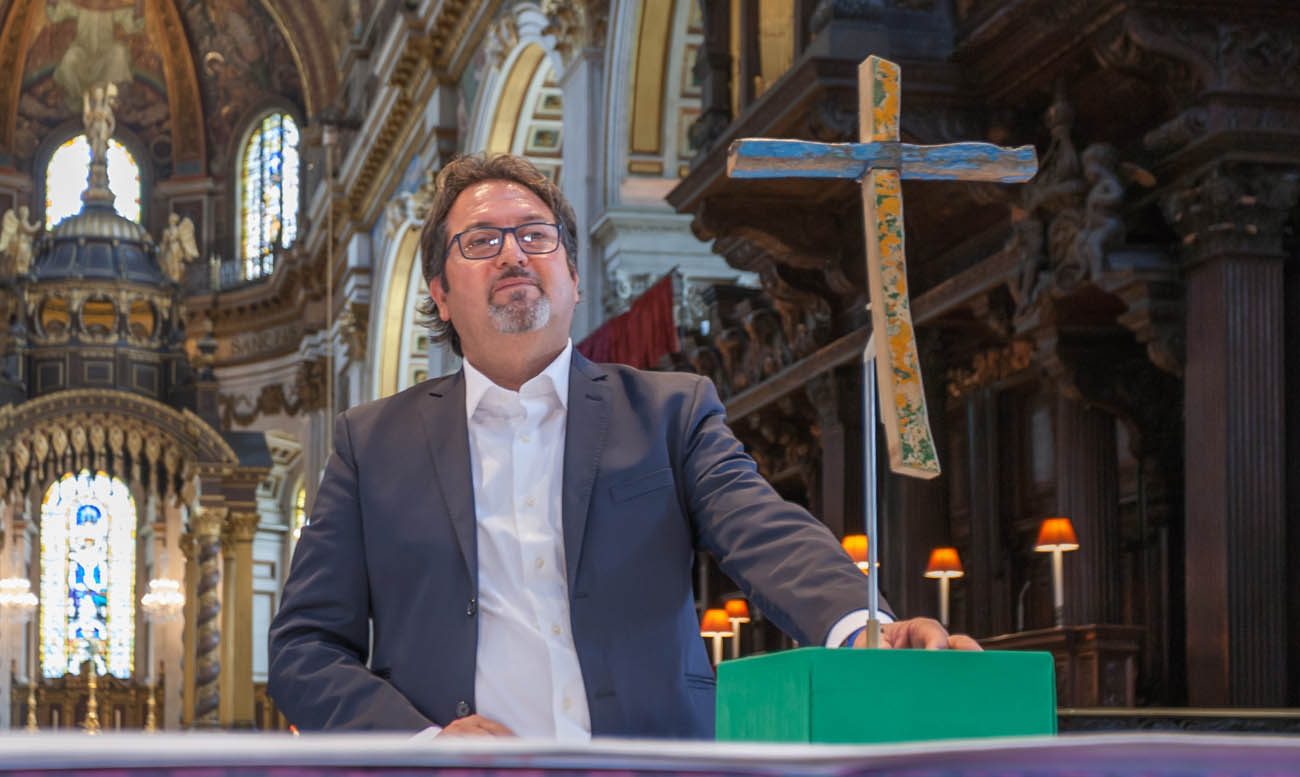 Italian carpenter Francesco Tuccio is pictured in London's St. Paul's Cathedral with a cross he made from pieces of a boat that wrecked in 2013 off the coast of Lampedusa, Italy. The British Museum commissioned the weather-beaten cross displayed at the cathedral, and it now holds a prominent place in the museum in London. (CNS photo/Graham Lacdao, Chapter of St Paul's)

LONDON (CNS) — As Europe held its breath on whether Britain would vote to remain or exit the European Union, the U.N. refugee agency, UNHCR, reported that numbers fleeing war and persecution have soared four times over the past decade, to 24 people per minute or more than 65 million people forcibly displaced worldwide.

Concerns over immigration might tip the so-called Brexit vote, but a June 19 liturgy brought home the precarious plight of the displaced and how Christians respond to it.

A stark, weather-beaten cross stood at the center of the ornate 17th-century baroque St. Paul’s Anglican Cathedral in the English capital. It was carved by Italian carpenter Francesco Tuccio from pieces of a boat wrecked Oct. 11, 2013, off the coast of Lampedusa, Italy. More than 300 Eritrean and Somali refugees drowned while attempting to reach Europe that day, but the inhabitants of Lampedusa helped to save the lives of 155 others.

After meeting some of the Eritrean Christian survivors and frustrated at what he could do to help, Tuccio created a cross from the wreckage of the boat for each one as a reminder of their salvation from the sea and hope for the future.

“There were and are wooden boats coming to Lampedusa carrying people looking for help. And I have helped many. I also saw children and adults downing,” Tuccio said. “After I had seen so many landings, I was utterly dismayed.

“I looked at Jesus nailed on the cross and a deep emotion struck me — now I am the castaway searching for providence, desperately trying to give voice to the scream that is dying in my throat, with a wish to raise awareness, to create a solid chain of help,” he said.

“The answer came, it was always there, in front of my eyes — Jesus. That is why I built a cross from the wood of those refugee boats arriving in Lampedusa,” Tuccio added. “I decided not to polish the wood, instead leaving it as it is: a wretched witness, ruined by so much pain.”

A similar cross was made for Pope Francis, who carried it at a memorial service for those who had perished. The British Museum commissioned the cross displayed at the cathedral, and it now holds a prominent place in the museum to mark an extraordinary moment in European history and the kindness of tiny Lampedusa’s inhabitants.

“If fear drives our responses, little wonder that we are inclined to separate ourselves from those we see as ‘other,’ believing that they have no claim on us,” Canon Tricia Hillas told Catholic News Service. But the “understanding that God entrusts us to one another means that we can’t so lightly ignore our connection.”

“This cross is a reminder of the words of Jesus: ‘What you did to the least of these, you did to me.’ Please pray for refugees today and for the world’s compassion,” Canon Mark Oakley said.