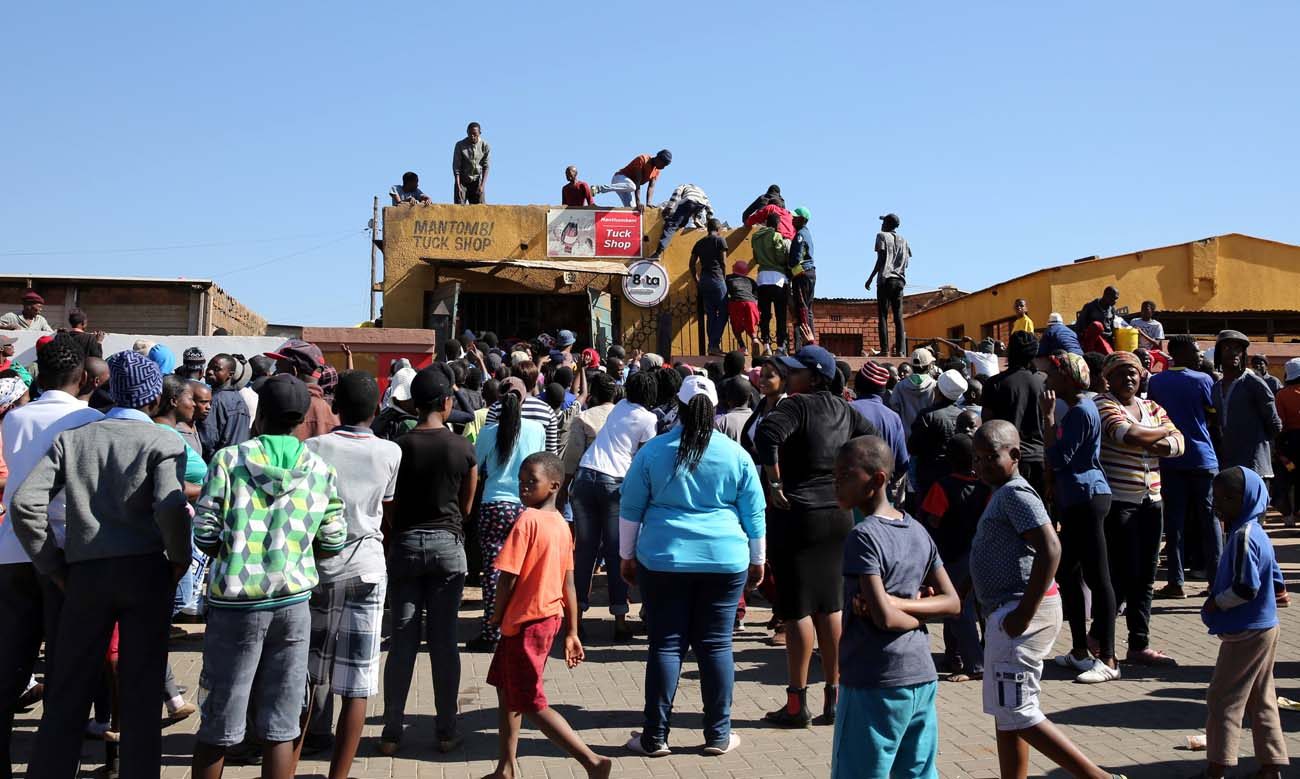 Looters climb on the roofs of shops during protests in Pretoria, South Africa, June 21. South African church leaders have urged an end to pre-election violence and criticized politicians for fueling it. (CNS photo/Siphiwe Sibeko, Reuters)

“We are disappointed that our political leaders have not been visible and loud enough in their condemnation of the recent factional violence and political assassinations,” Bishop Abel Gabuza of Kimberley, who chairs the Southern African Catholic Bishops’ Conference justice and peace commission, said in a June 27 statement.

At least three people have been killed in the Tshwane area around South Africa’s capital, Pretoria, in late-June riots triggered by the ruling party’s choice of a mayoral candidate for municipal elections, scheduled for Aug. 3. Shops have been looted and cars and buses set alight in violent protests over economic hardship.

Politicians “are mobilizing the young people in our communities, especially the unemployed youth, to engage in pre-election violence,” Bishop Gabuza said.

He urged young South Africans “not to allow themselves to be used by politicians who show signs that their primary interest is greed for power and government tenders.”

The South African Human Rights Commission warned that politically motivated murders and other acts of intimidation ahead of the polls are endangering citizens’ constitutional rights.

The commission’s mid-June statement came after arrests were made for the murders of two African National Congress members in KwaZulu-Natal province; the murders are said to be politically motivated.

South Africa’s political leaders have not “been vigorous enough in disciplining their candidates and members who are involved in disrupting campaign rallies of other parties and in creating no-go zones,” Bishop Gabuza said.

“At the root of many social ills in our country, including the current upsurge of pre-election violence, one finds greed and patronage politics,” he said.

This political culture must be stopped before it destroys the country and sends it “into a downward spiral from which it will struggle to recover,” he said.

The South African Council of Churches, of which the bishops’ conference is a member, asked clergy to intervene in politically divided communities before the elections.

“The ugly scenes we have witnessed in Tshwane are totally out of place in the democratic culture of our country‚ and we condemn this in the strongest possible terms‚” the Johannesburg-based council said in a June 24 statement.

“Sinful greed leads to the killings of people who stand in the way” of a preferred election candidate or a corrupt business deal, it said.

The council of churches urged its members to “intensify prayers and pastoral interventions in communities where peace must be restored‚ to maintain orderly coexistence across political divisions.”